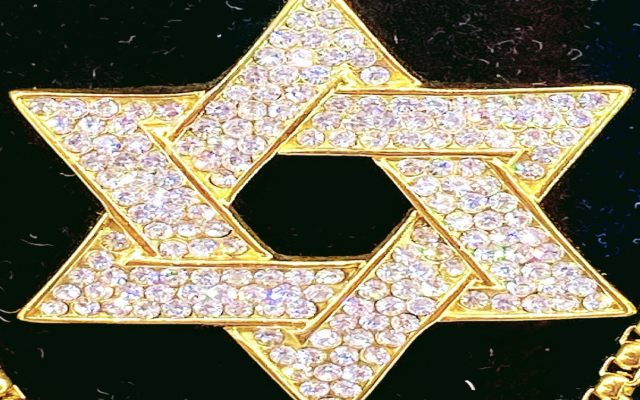 The movie is directed by Joshua and Benjamin Safdie, Sephardic Jews, and Adam Sandler, who is Jewish, plays Howard Ratner, a Jewish jewelry dealer in the famed NYC diamond district on east 47th street.

In the movie, Ratner is characterized as not only very materialistic (for example, regularly wearing lots of flashy jewelry and designer clothing), but also greedy, corrupt, and willing to do virtually anything to win it big, including buying uncut gems from African slave mines, pawning goods he doesn’t own, borrowing from loan sharks, gambling with money he already owes on debts, and arranging for phony bids at auction.

Ratner’s life is full of shlemazel of his own making.  While he has a good wife, kids, and extended family (maybe with the exception of his loan shark uncle), a fancy-schmancy home in the suburbs with a newly renovated pool, his own jewelry business that even caters to some big-league sports players, and a shiksa girlfriend on the side (who seems to love him), Ratner is never satisfied or happy and is always pushing for more!

Unfortunately, Ratner can’t see happiness right there in front of him, and instead he is constantly living on the edge–betting big and either winning it big or on the verge of losing it all.  The movie builds in suspense to a dramatic ending that you’d expect for someone that lives like this.

While Ratner is a messed-up individual–living out-of-control and addicted to all the meaningless glitter that life has to offer–it can’t be overlooked that Ratner also is portrayed as a Jew and that this easily can get packaged up into the historical stain and bias of blood libels and money grubbing against all Jews.  Even at Ratner’s family Seder, he is on one hand celebrating the freedom from Egyptian servitude, but on the other hand, he is still mired as a slave in his materialistic passions and greed.

Certainly, some Jews have committed notorious crimes, including large financial ones, not least of which was Bernie Madoff’s $65 billion Ponzi scheme for which he was arrested and sentenced to 150 years in prison in 2009. In stark contrast, we know that historically the Jews as a whole have been a displaced and deeply disadvantaged minority living for 2,000 years in exile, kept out of the professional guilds, forced to remain landless, relentlessly taxed, persecuted in and then expelled from the countries where they settled upon which they were often stripped of all material goods and life-savings. Only by G-d’s grace and their wits were they even able to survive from one generation to the next.

Perhaps, forced to live homeless and in constant fear, some individuals have erroneously tried to seek safety in amassing money and possessions (or like Jeffrey Epstein in allegedly doing other horrible crimes). I think we do have to remember though that sometimes, like in the Holocaust, truly just having that extra ring or watch was enough to trade for someone’s very life.  Despite that survival instinct in a world that has too often been inhospitable and dangerous to Jews, our ethic has always been to be spiritual (not materialistic) and do what’s right for the larger world and not just selfishly for ourselves.

In the movie, Howard Ratner was driven by greed and made bad life choices, and to me, it was a shame that the he was portrayed as a Jew, which can feed the vicious cycle of discrimination and hatred that has often been anchored around money. With the vicious machete attack on Chanukah at a Rabbi’s house in Monsey this week (after a slew of other anti-Semitic incidents, including an attack on a student for wearing a yalmulke on the NYC Subway to beatings and tire slashings of Jews in Brooklyn), we are reminded that there is once again a resurgence of prejudice and hate against Jews, but also that it’s the light of Chanukah that “drives out the darkness,” and that money and materialism are a mere shabby substitute to finding true security and success whether you work in the dense NYC Diamond District or live in the sprawling suburbs of America.