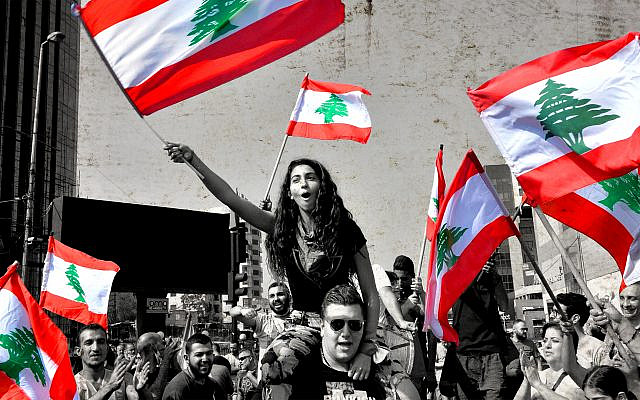 An anti-government protest in Lebanon (2020)

Lebanon is a democratic country with a parliamentary system of government that works under the framework of confessionalism, which entails the distribution of political and institutional power among religious groups known as confessional communities. Because of this, Lebanese politics has always been affected by the power play among the different religious groups in surrounding countries. What happens in Lebanon is also of great interest and concern to neighboring nations, particularly to its regional rival Israel.

According to the constitution of Lebanon, the president of Lebanon must always be a Maronite Christian, the prime minister a Sunni and the speaker of parliament a Shiite.


Christian Maronites are adherents of the Maronite Church, an Eastern Catholic church that is recognized by the Vatican. It’s the largest Christian denomination in Lebanon, constituting around 40% of the total population. Sunni Muslims are followers of Sunni Islam, the largest Islamic denomination comprising around 90% of the Muslim world. Approximately 30% of Lebanon’s population are Sunni Muslims. Shiite Muslims are followers of Shia Islam. They constitute approximately 30% of Lebanon’s population.

The parliament is responsible for creating laws and also plays a significant role in financial affairs. The president puts the laws created by parliament into effect. Parliamentary seats are split between Christians and Muslims and are further divided proportionally among the different denominations within the two major religions. Government and public-sector positions are also divided among the major sects.

While the power-sharing scheme in Lebanon looks appealing in theory, in reality, it has only created entrenching divisions among the different religious sects. This is because the leaders of each sect have only used their power and position to serve their personal and sectarian interests and not the interest of the whole nation.

Hezbollah and other major political parties

Founded in 1982 by Iran’s Revolutionary Guards to fight Israeli forces in Lebanon, Hezbollah is now considered as the most powerful political party in the country. The Shiite party became part of the Lebanese parliament in the 1990s and it also has ministers in the government. Hezbollah is deemed a terrorist group by the United States and its allies. In 2012, Hezbollah gained additional political power when they fought for Bashar al-Assad during the Syrian civil war. Many of the other major political parties in Lebanon have close ties to Hezbollah.

This party is led by Western-backed Saad al-Hariri who was Lebanon’s prime minister from 2016 to January 2020. Hariri rose to power after the assassination of his father, Rafik al-Hariri in 2005. The Future Movement opposes Hezbollah, five members of which were later charged by a U.N.-backed court for the older Hariri’s killing.

The FPM is established by Lebanon’s current president Michel Aoun and is led by his son-in-law Gebran Bassil. The FPM is known to be an ally of Hezbollah.

The Amal Movement is a Shiite party led by Nabih Berri, Lebanon’s speaker of parliament since 1992. The party became a close ally of Hezbollah after the civil war ended. The group is also closely tied with President Bashar Hafez al-Assad of Syria.

The PSP is an organization from the minority Druze sect (a monotheistic Abrahamic religion)  led by Walid Jumblatt, the son of the assassinated civil war leader Kamal.

The LF is a Maronite Christian organization led by Samir Geagea who replaced the group’s assassinated founder Bashir Gemayel. The LF is the most significant Christian opponent of Hezbollah.

Also known as the Phalange Party, the Kateab is a Maronite Christian group led by Sami Gemayel, son of former president Amin Gemayel. Gemayel moved to the fore after his brother, Pierre, was killed during a series of killings that happened in 2006 that targeted opponents of Syrian influence in Lebanon.

The Marada Movement is a Christian Maronite movement led by Suleiman Franjieh, a friend of Assad and an ally of Hezbollah. Hariri initially backed Franjieh for the presidency but the deal fell off and Hariri eventually supported Aoun.

Israel and Lebanon have a long history of conflict and aggression that can be traced back to the Arab-Israeli War, where Lebanon committed 1,000 soldiers to the cause of fighting Israeli forces. When the Israeli state was created in 1948, displaced Palestinians fled to Lebanon, many of which were recruited later on by the Palestine Liberation Organization (PLO). The PLO has waged a holy war or jihad against Israel with the goal of establishing a Palestinian State.

Israel invaded Lebanon twice, in 1978 and 1982, to expel the PLO from the country. After civil war broke out in Lebanon in 1984, Israel retained a strip of South Lebanon with the support of the South Lebanon Army (SLA).

In 1985, Hezbollah called for the end of Israel’s occupation of parts of Lebanon and refused to disarm even after the civil war had ended. In 2000, Israel pulled back completely from Lebanon after clashes with Hezbollah.

Hezbollah, however, continued to cross the border to attack Israel. In 2006, the Lebanon War, also known as the Israel-Hezbollah War, broke out. In September of the same year, hostilities were suspended but tensions between both sides still exist even up to this day.

In light of protests and demands for reforms, Hariri quit in October 2019. In January this year, a new Lebanese government was formed. But protests continue as protesters see no real change with the old elites still in power.

Hariri was replaced by Hassan Diab, the appointment of which was backed by a parliamentary bloc that is allied with Hezbollah and is known as pro-Syrian. With a Hezbollah-supported prime minister, the influence of Iran in Lebanon is seen to grow even more. With Hezbollah having a tight grip on Lebanon, the country is seen to post an acute threat to Israel.