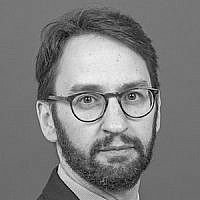 The Blogs
Jonathan Rabinovitch
Apply for a Blog
Advertisement
Please note that the posts on The Blogs are contributed by third parties. The opinions, facts and any media content in them are presented solely by the authors, and neither The Times of Israel nor its partners assume any responsibility for them. Please contact us in case of abuse. In case of abuse,
Report this post.

The World Heritage Committee of the United Nations Educational, Scientific and Cultural Organization (UNESCO) passed a motion on July 7 declaring the Old City of Hebron to a Palestinian World Heritage Site in Danger. This new narrative, now enshrined by UNESCO, is both historically inaccurate and contrary to lived reality. And yet these facts and the dangerous implications of such a move seem to elude the member bodies of the committee.

The vote passed in secret ballot with an overwhelming majority of 12 in favor, 3 opposed, and eight abstentions. The proposed decision was part of ongoing efforts by the Palestinian delegation to proclaim certain religious and cultural sites as uniquely “Palestinian”.

Of note is their past successes in having the Temple Mount, Judaism’s holiest site, referred to by UNESCO, as Al-Haram al-Sharif (Islam’s ‘Noble Sanctuary’) without mention of its Hebrew name. The site is now strongly implied to be of solely Muslim importance, ignoring its clear historical and religious significance to all three Abrahamic religions – and despite the fact that the Temple Mount in Jerusalem is where both Jewish Temples stood in antiquity, and that it remains the center of Jewish faith.

The Tomb of the Patriarchs in Hebron is also highly significant – it is the burial place of Abraham, the father of all three Abrahamic religions, and it is a site of prayer and veneration for Jews, Christians and Muslims alike.

What then is the purpose of designating these sites as solely Palestinian-Muslim? These recent decisions are not only symbolic – in that they enshrine Muslim connections to the sites while dismissing those of Jew and Christians as tenuous – but also serve the efforts of those seeking to characterize Jews and Christians as interlopers of the land, positing them as “foreigners” and “occupiers”.

Indeed, a key strategy of BDS and other anti-Zionist movements is to capitalize on historical ignorance in order to cast Jews and Israelis as an occupying presence in the land by implying that they have no ancient roots in the region. But this is, of course, manifestly incorrect. There is no doubt that Jews and Christians share equally in the history, and destiny, of the Middle East. The story of the region is fundamentally one of religious diversity.

Nevertheless, we see here a constant effort to both rewrite history and “erase” the actual presence of minorities from these sites. In fact, while these resolutions are written on paper, on the ground today we see the near elimination of the Yazidis of Iraq and the constant decline of Christian communities in almost every country in the Middle East, except for Israel. In fact, almost 70 years ago, the numerous and diverse Jewish communities of the Middle East were almost entirely displaced from their homes by the Muslim governments, taking refuge in the State of Israel.

In these countries, once the loci of rich tapestries of human history, religious diversity is today being stamped out, all with the seeming cooperation of the UN agency specifically committed to cultural development.

UNESCO’s role in these efforts is indeed troubling for several reasons.

The first is moral. Anti-Christian and anti-Jewish sentiment in the Middle East exists, and must not be ignored. This sentiment is undergirded by the myth that Christians and Jews occupy an ontologically inferior status in this part of the world. This should not be encouraged and abetted by international organizations.

The second is normative. The acceptance of a historical narrative that would be rejected by any serious historian of the Middle East should not form the basis of any UNESCO decision. Norms that govern the way that we arrive at facts must remain sacred, especially today. Alternate histories that omit Judaism and Christianity open a new front in the war against religious diversity in the Middle East.

The third is pragmatic. UNESCO exists to coordinate international cooperation in education, science, and culture. Its goals include allowing citizens to “grow and live in a cultural environment rich in diversity and dialogue”. Today, cooperation in Hebron and the Temple Mount is overseen by Israeli authorities, and coordinated with the Islamic Waqf.  There is laudable cooperation in Hebron, where the Waqf and Israeli authorities work closely – the head of the Waqf even recently praised the Israelis for their commitment to freedom of worship at the site.

Why is UNESCO then trying to fix something that is not, in fact, broken?

This begs the obvious question: what goal has UNESCO achieved by passing this decision? UNESCO must adhere to its goals and encourage the shared and cooperative use of these sites and other such sites around the world. These continued decisions which fly in the face of established history serve no purpose other than the continued politicization of a crucial United Nations institution.