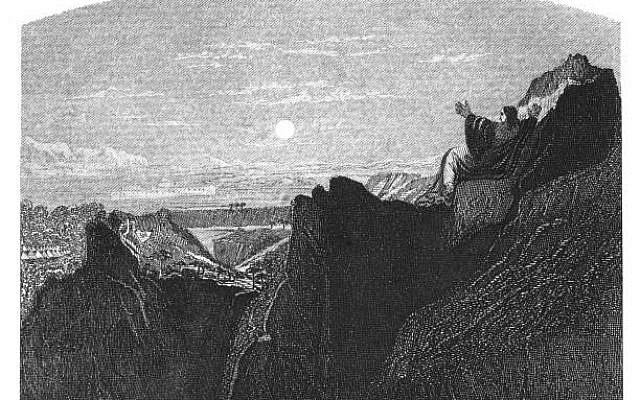 Deuteronomy 34:5 – And Moses the servant of the Lord died there in Moab, as the Lord had said. (Copyright has expired on this artwork. From my own archives, digitally restored.)

Every year on Simchat Torah we conclude the reading of the five books of the torah and begin at the beginning by reading about the creation of the world. Devarim (Deuteronomy) ends with Moses’ death when he is fully capable, both mentally and physically: “Moses was a hundred and twenty years old when he died; his eyes were undimmed and his vigor unabated” (Deut 33:7). Breishit (Genesis) begins with the creation of the world, climaxed by human beings’ birth in God’s image (Genesis 1:27) and the conclusion of the creation with the statement va-yechulu ha-shamayim ve-ha-aretz ve-chal tzeva-am (Genesis 2:1-3) which we recite every Friday night at kiddush, with the blessing over the wine.

We do not know where Moses is buried—and there are those who say that he never died and is still out there flying around like Elijah. The human race is created and then placed in a mythical garden of Eden, a paradise of sorts, from which (spoiler alert) they will soon be kicked out. Before the two torah readings we have seven hakafot during which everyone marches around the synagogue with the Torah scrolls and flags, singing praises, asking for salvation from God. In addition to the torah readings, there is a haftarah reading about Joshua, who will enter and conquer the land of Israel (more or less). We have yizkor, to remember our dead, and the prayer for rain (in its time)— which makes for a very long service.  No wonder, in many congregations, there is wine/hard liquor, cakes and munchies available throughout the service. And to make the service even longer during the torah reading, everyone is called up to the torah for an aliya, which can also take forever. One of the more meaningful customs is the blessing of the children with the moving phrase hamalach ha-goel oti from Genesis 48:15 with its haunting melody.

In Israel all of this takes place on one day, because simchat torah is combined with Shemini atzeret, whereas in the diaspora, it is spread over two days. Is that an advantage or disadvantage? I don’t know. Since coming on Aliyah in 1967, I only experienced Shemini atzeret in the diaspora three and a half times: once when my father-in-law died in Lincoln, Nebraska, during Succot; another time on a sabbatical at Mt. Holyoke; and two more times when my husband had interim pulpits in Los Angeles and New York City. The half time was because I was in Israel for all of Succot once, when my daughter had a play appearing in the Akko Festival and then returned to celebrate Simchat Torah a second time (after a 15-hour flight to LA) in our synagogue and be drafted into reading the Torah with no hour’s sleep.

The holidays are finally over and tomorrow we are going back to normal: which means I have to schedule an eye doctor appointment, get the fifth vaccination for omicron, start preparing to teach my classes and finish writing this blog. The vacation was lovely, but confusing—too much going in and out of holidays. Remembering to say modadim le-simchah (or is it be-simchah) instead of shabbat shalom and then remembering to say shabbat shalom instead of hag sameach. Remembering that you can cook on yom tov (if you have a yahrzeit candle next to the stove). This was brought home to me when I was sitting outside the synagogue at the end of services and a strange man came into the courtyard and asked if there was a lit yahrzeit candle in the synagogue. Why? Because he had a cigarette and desperately needed a light. I told him to come back in a few minutes when the services would be over, but I guess he was impatient, so he left. This can only happen in Israel. My friend who was sitting with me was astounded. I thought it was cool.

While finishing the torah reading for Deuteronomy in which Moses goes up to Mount Nebo, I noted once again how unfair God is to those He loves: He shows Moses the entire land of Israel in detail and even reminds him that this is the land in which He swore to Abraham, Isaac, and Jacob and then adds, “I have let you see it with your own eyes, but you shall not cross there” (Deut. 34:4). In Hebrew it is very stark “ve-shama lo ta’avor!”

ve-shama lo ta’avor ….. It seems so cruel; when I finished reading from the torah, our young rabbi, sensing my sadness, reassured me and the congregation, “Don’t worry, Moses will be back again next year when we get to Shemot (Exodus). The fact is every time I read this, I think of the unfairness of God. There is a mention of the mei merivah (the waters of contention) in the second Aliyah: “And of Levi he said: Let Your Thummim and Urim Be with Your faithful one, Whom You tested at Massah, Challenged at the waters of Meribah” (Deut 33:8). Is this a promo to offset God’s unfair treatment of his beloved Moshe, who is from the tribe of Levi; to remind us of his original sin of hitting the rock rather than speaking to it?  So much of zot haberacha is unintelligible. Although it is poetry, it is not marked off distinctly in the torah scroll as is ha-azinu (Deut 32), or az yashir (Exodus 15). One wonders why the redactors of the torah slipped it in here. Perhaps they wanted to remind us that we will inherit the land and that the twelve tribes are mentioned and blessed in its passages.

If we look at the shabbat torah reading of the intermediate days (hol ha-moed) we see God as the jealous God – el kanah. One wonders also at the choice of this passage—except for the fact that at the end it states that we should observe hag ha’asif, i.e. succot (Exodus 34:22-23). But we also see in this passage that God is enchanted with Moses, he finds favor with God. At the beginning of the passage (Exodus 33:11) God speaks to Moses panim el panim (face to face) like one speaks to a friend. He speaks to Moses and reassures him of his specialness and will even allow him a glimpse of his back. If I were a naïve reader, attending a synagogue for the first time, I would find it disconcerting that this God who loves Moses so much on shabbat hol hamoed, will two days later on Simchat torah, kill him off and bury him in an unmarked grave.

I wondered if some of the classical commentators were uncomfortable with this as well. Those who are, engage in justifications and apologetics. One of the questions Sforno (15th century) relates to has to do with why repeat  shamah lo ta-avor since we have been told many times earlier that Moses won’t be going to the promised land.

Moshe Alschich (1508–1593), a disciple of Joseph Caro, comments that it is written as a compliment to Moses: “look how much you have done for the people (and perhaps even more) without even actually going there.” But then Alschich discusses how very often tzadikim (holy people) die outside of the land of Israel, but are brought to the Land to be buried there. But because the land was not pure at the time, a tzadik like Moshe could not be buried there.  Thus Moses will not go there, but will remain in the heavenly abode and the holy land of the living, even though he dies outside the land of Israel. Alschich also points to the extraneous sham (there) in verse 5. Vayamot sham moshe eved Adonai… “So Moses the servant of Adonai died there, in the land of Moab, at the command of Adonai (Deut 34:5). Moses was God’s eved (servant, slave), who did not serve in order to receive a reward. Thus, his death was with a kiss from God who continued to love him and be attached to him.

Yaakov Tzvi Mecklenburg (1785-1865), author of Haketav VehaKabbalah is one of the less apologetic commentators. It is clear from his opening statement that he is uncomfortable with God’s actions. He opens by writing:

God forbid (challilah) that God meant to cause sorrow to the one who was faithful to him, by showing him the land that he had given his soul to, and to increase his heartache by saying that he was prevented from going there. It is usual to precede the major points by the minor ones, and to precede the negative which is the main thing by saying “you shall not go there”.  The word there (shamah) is the main [negative] thing. And the [minor, positive] intention is to show the details and the division of the land by tribes and all the things that will take place in the future. All the wonderful things that will happen to the nation until the end of days are beyond the capacity of the ordinary person to see in his physical life. One can also say that this phrase of ‘lo ta-avor’ is a “voluntary negation”, that is, you do not need to go there because you have already seen the land and the future [free translation and paraphrase].

Despite these lovely and interesting justifications, I have one other problem with the end of the torah reading. The usual understanding of Moses’ state of mind when he died is how wonderful it is that at age a hundred and twenty years old, he saw clearly and was in full strength “his eyes were undimmed and his vigor unabated” (Deut 33:7). When someone dies, we usually compliment the person by saying, isn’t it wonderful that he had all his critical faculties before dying and he was aware until the very last minute. He was able to communicate with us and tell us his wishes and say goodbye. But I wonder, surely, it is luckier for the person to be demented before she dies and to not understand that she is leaving the world, rather than to be told, that because of her sins, like the condemned person before her electrocution, she is going to die. Certainly, from the perspective of the living, it is wonderful that we have a chance to say goodbye and know that the person recognizes us. But I am not sure that if we reversed the situation, that the person who is dying sees it in the same way. I think we, the readers and commentators on the torah “doth protest too much” in our positive spin of Moses’ death and non-entry into the land of Israel.

Since in the diaspora, people are still observing the holiday, I wish you all a happy holiday–moadim le-simcha, chagim uz-manim le-sasson; to those of us in Israel, I wish us all a happier year than the last one.