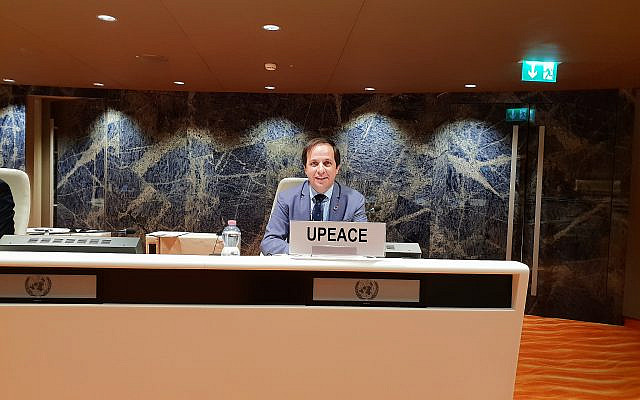 The human cost and suffering caused by armed conflicts and violence in the world is today still high. Since the United Nations was not incepted only in the name of nations or states, but also as commitment by and to the «peoples» of the United Nations, its responsibility to save succeeding generations from the scourge of war is still alive. Therefore, its founding vision based on human rights and fundamental freedoms remains no less important so today.

In order to create a more peaceful world, the Charter of the United Nations established in its article 1 and 2 the following “purposes and principles”, inter alia: the prohibition of acts of aggression or other breaches of the peace, the development of friendly relations among nations, the self-determination of peoples, the enhancement of international co-operation, the promotion of human rights and fundamental freedoms, the settlement of international disputes by peaceful means, the prohibition of threat or use of force against the territorial integrity or political independence of any state.

Chapter VI of the Charter, which is devoted to the pacific settlement of disputes, states in its article 33 that the parties to any dispute shall seek a solution by negotiation, inquiry, mediation, conciliation, arbitration, judicial settlement or other peaceful means of their own choice.

Parties involved in a conflict are explicitly obligated to deploy active efforts with a view to settling the dispute existing between them. The responsibility of the parties to a dispute continues to exist even after armed activities have begun. It is precisely in situations of armed conflict that endeavors for a peaceful solution must continue. All parties involved in an armed conflict are repeatedly called to work for the urgent achievement of a solution.

In the 2005 World Summit Outcome of 2005, Member States emphasized the obligation of States to settle their disputes by peaceful means in accordance with Chapter VI of the Charter, the use of the International Court of Justice and the Declaration on Principles of International Law concerning Friendly Relations and Cooperation among States in accordance with the Charter.

As set out by the General Assembly a responsible and credible mediation requires, inter alia, national ownership, the consent of parties to a particular dispute or conflict, the impartiality of the mediators, their compliance with agreed mandates, respect for national sovereignty, compliance with obligations of States and other relevant actors under international law, the operational preparedness of the mediators, and coherence, coordination and complementarity of mediation efforts.

However, the Security Council clearly stressed in its Presidential Statement of 2009 that the principal responsibility for the peaceful settlement of disputes rests with the parties to the conflict and that it is only through their full participation and genuine commitment to resolve the conflict including its underlying causes, that peace can be achieved and sustained.

In September 2010, Finland and Turkey took the initiative to create a group of Friends of Mediation at the United Nations to bring together various actors involved in mediation and to push for enhanced use of this pacific settlement of dispute.

After long and intensive negotiations, the Group presented its first resolution entitled “Strengthening the role of mediation in peaceful settlement of disputes, conflict prevention and resolution” before the General Assembly in June 2011. The UN Secretary General described the resolution, which was adopted by consensus, as “a groundbreaking development that positions the Organization as a standard setter of mediation”. To surprise of many, it was the first-ever resolution on mediation adopted by the United Nations.

In 2014, the General Assembly reiterated in its resolution 68/303 that all Member States should strictly adhere to their obligations as laid down in the Charter of the United Nations, including in the peaceful settlement of disputes, conflict prevention and resolution; welcomed the contributions of Member States, as well as of the United Nations and of regional and subregional organizations, to mediation efforts and invited Member States, as well as the United Nations and regional and subregional organizations to continue to optimize the use of mediation and other tools mentioned in Chapter VI of the Charter.

The Mediation for Peace and the Istanbul Conference on Mediation held in February 2012 offer an opportunity to re-energize our efforts in this direction. As indicated by the Secretary-General’s report on this topic, strengthening the mediation capacity and enhancing the mediation efforts of the United Nations is our common goal. This is of utmost importance today, especially when the number of conflicts is on the rise again.

The role of the United Nations is vital in order to solve these news, as well as older, low-intensity conflicts. With this renewed commitment to the promotion of mediation, the United Nations raises awareness and highlights the increasing importance of mediation in conflict prevention and resolution among all Member States.

In the context of conflict prevention, States have the primary responsibility to protect civilians and to respect and ensure the human rights of all individuals and to protect its population from war crimes, ethnic cleansing and crimes against humanity. In accordance with resolution 2171 on conflict prevention of 2014, the Security Council unanimously acknowledged that “… serious abuses and violations of international human rights or humanitarian law, including sexual and gender-based violence, can be an early indication of a descent into conflict or escalation of conflict”.