Can today’s fractious Israel muster the resolve and marshal the resources necessary to creat a truly shared society? 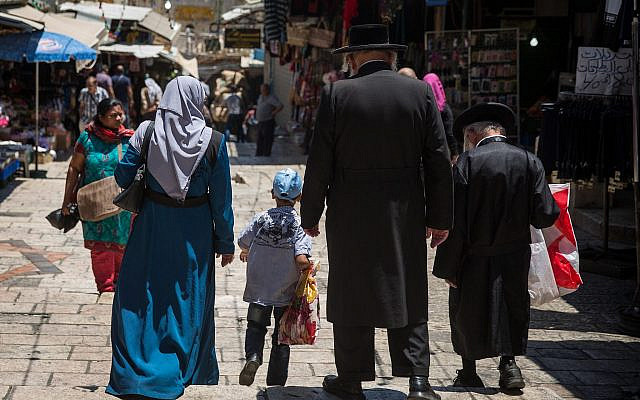 Anyone in the country this week would have had a hard time not recognizing its fragility. The multiplicity of identities and beliefs extant in the state today, while potentially enriching, also comprise a clear and present danger to Israel’s social resilience, most frighteningly expressed in the death threats sent to PM Naftali Bennett a few days ago, accompanied by a bullet.

Understandably, then, and for good reason, it was concern with this phenomenon that informed the ceremonies and speeches marking Israel’s Memorial Day and Independence Day this year.

President Herzog declared that “my job is to find a formulation for a shared existence together” while emphasizing that all our remarkable achievements only came about as a result of our working together. In his plea for unity on behalf of the more than 28,000 who have fallen in Israel’s defense, he added, “They did not ask, nor did anyone ask them, who was right-wing and who was left-wing; who was religious, who was secular; who was Jewish and who was not Jewish. They fell as Israelis, defending Israel,” concluding with a poignant reminder that “in cemeteries, arguments fall silent.”

Prime Minister Bennett addressed the same theme in his speeches, referring to his days as a soldier three decades ago. “We were there, in Lebanon, all of us together. Kibbutzniks with urbanites, secular with religious, Beersheba with Tel Aviv, right with left, Jews with non-Jews. The connection between us all was natural, something that did not even need to be discussed… Each risked his life for the other. We were brothers.” And reminding us that sectarianism was what caused our downfall two millennia ago, and that throughout our long history we have yet to survive as a sovereign state for even 80 years, he intoned that we need now succeed in doing just that. “We must not allow hatred to capture us, to control us. We need to view one another favorably, to believe that the other also wants what is in the state’s interest even if his opinion is completely different from our own. We all need always to place the good of the state above our sector, above our self-interest.”

Knesset Speaker Mickey Levy, speaking on Mt. Herzl during the transition from Memorial Day to Independence Day, observed that “We manage for a moment to not let any division get between us,” and urged all of Israel’s citizens “to choose to see the good in each other…, to choose partnership over division, to be together in this home belonging to us all.” It was a message reinforced during the ceremony itself, with soldiers of all backgrounds in a choreographed march forming a circle of inclusion encompassing them all.

Common to all these remarks was the understanding that the threat of social disintegration is real and needs to be taken seriously, a realization long overdue. Two years ago, Israel’s Institute for National Security Studies highlighted in its report on Challenges to Societal Resilience, “an accelerated trend of weakening social solidarity within social groups, between social groups and the state, and between the individual and the state… characterized by deepening public disputes stemming from diverse worldviews, especially regarding the necessary balance between national and religious values and democratic, liberal, secular ideals… aggravated even further by divisive, extreme, and superficial political discourse.” Among other phenomena, the report noted the disenfranchisement of Israel’s Ethiopian Jewish community as well as of its Arab citizens and concluded with a warning of “risks and crises in four main domains: undermining of the delicate balance regarding Israel’s identity as a Jewish and democratic state, especially in its tilting toward the Jewish pole at the expense of the democratic pillar; the deepening of social and economic gaps…; the transformation of the public discourse in Israel into a violent struggle of hatred and exclusion of the “other”; and the consequent weakening of societal resilience in Israel” and cautioned that these trends could “also impact negatively on the increasingly sensitive relationship between Israel and Diaspora Jewry.”

These conclusions were reinforced just a few days ago, when the Jewish People Policy Institute released its annual Pluralism Index. This year, the study focused on attitudes of and toward the Arab and ultra-Orthodox (Haredi) sectors, which respectively comprise more than 20% and 12% of Israel’s population. Together constituting a full third of all Israelis, the report notes, they cannot be dismissed as small minority groups, such that the survey’s revelations present worrisome challenges to the social cohesion of Israeli society. While 88% of left-leaning respondents believe that all Israelis, Jews and non-Jews, share a common future, only 28% of its right-leaning citizens are so inclined. In the political realm, the study reveals that “secular Jews aspire to political partnership with Arabs but not with Haredim; religious and Haredi Jews aspire to political partnership with secular Jews but not with Arabs.” On the social level, the reality is that different ethnic and religious groups generally live in distinct residential areas and attend separate schools, such that interaction between them is low. While the report notes that according to some this separation reduces tension and friction, it also raises the concern of others that our lack of familiarity with one another is responsible for growing suspicion of and animosity towards those dissimilar from oneself, whether Arab or Jewish.

Independence Day speeches calling for unity and expressing concern with these issues are most  welcome and important in terms of raising public awareness, but they won’t deflect the challenges Israel is facing. Fortunately, the Government of Israel has formally resolved to take action as well. Among its initiatives (full disclosure, it is one in which I am intimately involved), is a decision to assist in the creation of a Center for a Shared Society named after and in commemoration of Israel’s fifth president, Yitzhak Navon, who spent a lifetime struggling to bring together the diverse elements of Israeli society. It’s resolution to do so acknowledges that “Israel is comprised of various communities and diverse ethnic groups [resulting in] rifts that have existed for many decades,” and refers to Navon as “an outstanding symbol of unity, mutual responsibility, and social cohesion” who, in his own words, recognized that “It is our capacity for dialogue across different segments of society that fuels our strength and resilience.”

To that end, the multi-faceted experiential complex perpetuating his legacy will engage in a wide variety of activities promoting familiarity with and mutual respect between Israel’s diverse populations, inter alia by showcasing the culture of Sephardi and Mizrachi Jewry, the wellspring of Navon’s values, which counsel adherence to the Rambam’s “golden path” of tolerance and moderation that inspired the president’s lifelong devotion to fashioning Israel as an exemplary society in which all its citizens – Ashkenazim and Sephardim, religious and secular, new immigrants and veterans, Jews and Arabs, Christians and Druze – would feel at home.

May this year’s Independence Day admonitions over our internal strife serve as inspiration for us all to strive for reconciliation in the year ahead.