Years of planning and countless never-ending hours of study. Add to those my Liberal Arts background and I knew my chances of success were not the greatest. But with the weight of that knowledge came the drive, that push, the necessity for success. That momentum was the sole motivation moving me forward despite the odds.

I can pinpoint the year I first felt that drive. It was 2016 and I was a fully trained combat medic in the IDF. My battalion took a rather large part in the not-famous-enough Operation Good Neighbor. The operational mission: provide medical care to the Syrian civilians hurt in the hellfire of the civil war. It was perhaps the most meaningful part of my service in the IDF. We treated many many Syrians, offering basic trauma treatments to full transport by air or land to Israeli hospitals where they would receive proper surgeries and be allowed to recover and rehabilitate. Sometimes we would even take full busloads of children and their mothers for dental care completely unrelated to war injuries. It was all free. It was an operation done truly out of good will.

Although we had a serious language barrier and I know I will never see them again and I know they will not be able to repay me ever, I will not forget some of their faces or the look of trust or relief or gratitude these people had towards me as I treated them. People are people and I am sure they will not forget us either. I felt so proud of Israel and of my choice to move and serve her. Our tradition teaches us of the equality among nations who all came from a single couple (Mishna Sanhedrin 4:5) and instructs us to open our homes to aid all people like Avraham’s tent of Hachnasat Orchim; western humanist values support that or are perhaps even overshadowed. And in those moments of medical care my inspiration gave way to motivation. If only this operation had been more thoroughly documented.

Since that year I have been preparing for medical school. This week I was accepted.

Joy, relief and gratitude were some of the flash emotions that now went through my mind.

As I read through that acceptance letter I simply could not contain myself. There is a captivating power seeing efforts and experiences of years converging into a single moment, a single sentence ratifying all that has come to pass. And as I was caught in that net of bewilderment I found myself leaving my Jerusalem apartment and walking. I was on some sort of autopilot. I needed space to wander in my amazement.

And as I saw myself in a haze from beyond I noticed I was on my way to a familiar place. I awoke at the gateway to the Temple Mount. Just one day earlier the mount had been opened after 70 days of Corona closure. 70 days of exile. There were 36 of us in our group – religious, secular, female, male, Jew and Gentile. We went up together as one. And out of that void of raw joy, relief and gratitude solid thoughts began to form in my heart.

We stopped at the eastern wall of the Temple Mount. Herod had built his main gate to the Temple Mount just next to us, a massive gate known as the Shushan Gate in honor of the Persian Empire who brought the Jews back from exile over 2500 years ago. And in that vein of gratitude I opened up to the group. I told them how I am in awe over my acceptance into medical school and came to the Temple Mount to offer my thanks.

Thanksgiving is uniquely connected to this place, I told them. Midrashic literature has stated that in the future there will be no sacrifices save for the sacrifice of Thanksgiving, the Todah (Tanchuma Emor 14). It was meant to be an extravagant meal of 40 different types of bread along with the meat. This was so that the gratitude expressed by one may be shared with many.

And so I shared my gratitude with this ragtag group of individuals and I felt elevated. In all my years on the Temple Mount I have never seen anyone receive applause until now. Yet here I was basking in the Glory and the glory. I was beaming. Everyone wished me success and blessing in my coming ventures and told me to take care to treat all my patients with respect but to respect the idea that I am simply a conduit for Divine healing. I thought that idea was very powerful. And I also thought that expressing my gratitude is the first step in that direction.

In those years past, prior to my point of convergence, I had worked hard. I knew that in all the effort perhaps my original intention, the content of the conduit, would be lost. And so I had taken it upon myself that in the event I am accepted I will make a Siyum Shas Bavli on the Temple Mount. And I plan to hold to this. I believe this goal will serve to remind me of my starting point throughout my studies. And without a Todah today I believe that a siyum on the Temple Mount may actually serve the same purpose – to share my gratitude with others and care for them.

Upon exiting the Temple Mount complex my solid thoughts had already turned to guiding principles for me. Through the two values of gratitude and care for others we can unite. We can become better. 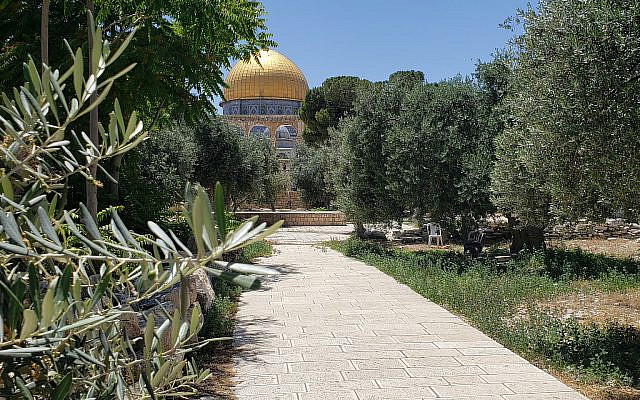 A look upwards from the eastern wall after 70 days the Temple Mount was closed.
About the Author
Natan is a medical school student and a social and Temple Mount activist. He hails from Toronto, Canada and made full Aliyah in 2014, although he has been making Aliyah to the Temple Mount since 2011. His passion for the Temple Mount began in Yeshivat Har Etzion and continued through his Bachelor's degree, his military service and work in the Israeli defense industry. Previously he was the project manager at Students for the Temple Mount and still guides on the Temple Mount at the Open Gate organization.
Related Topics
Related Posts
Comments