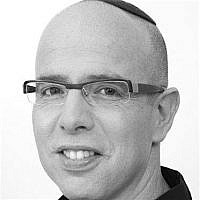 The Blogs
Uriel Lederberg
Apply for a Blog
Please note that the posts on The Blogs are contributed by third parties. The opinions, facts and any media content in them are presented solely by the authors, and neither The Times of Israel nor its partners assume any responsibility for them. Please contact us in case of abuse. In case of abuse,
Report this post.

For the past 20 years, every Purim morning I have the same routine. I get up early and I deliver donations of matanot l’evyonim (gifts to the poor) to families struggling financially. Year to year, seeing the smiles on the faces of families whose situation makes it hard for them to feel the joy of the day, reminds me of what the holiday is all about.

We tend think of Purim as a holiday for the children. With the costumes, the masks, the hamentshen, everything is happy and joyful. It’s hard to remember that Purim is actually one of the most social holidays that we celebrate.

The holiday of Purim is based on an event that has been seared into the Jewish consciousness time and time again: a regime’s attempt to eliminate the Jewish people and the Jewish presence in the world. The case of Purim was a ‘final solution to the Jewish problem’ long before the final solution was invented in Europe. The story of the Megillah is again the story of the Jewish triumph from near destruction and annihilation.  The difference however, is that this time it wasn’t a world war that saved us- we saved ourselves. It was our ancestry who saved the nation, by coming together in unison and solidarity.

We realized then that in a time of difficulty we must be untied. We realized then that strengthening our national collective and uniting in social solidarity is what we needed to be done during these times. One of the most decisive moments in the Purim story is when Esther realizes that the task of saving the nation lies on her shoulders. She asks Mordechai to bring the Jewish people together, taking the measures required of her only with the knowledge that a unified people who care for one another stand behind her. As it states, “Go and gather all the Jews who are in Shushan and fast for my sake, do not eat and do not drink for three days, night and day. My maids and I shall also fast in the same way. Then I shall go to the king, though it is unlawful, and if I perish, I perish.” (Esther 4:16). On the day that the organized attack on the Jews throughout the Persian empire was set to occur, we decided to unite: “The Jews gathered in their cities throughout the provinces of King Achashverosh to attack those who sought to harm them.” The result of our coming together: “No man stood in their way” (Esther 9:2).

The rest of the story is known, but the way in which our sages chose to commemorate it reflects the social nature of the day — with feast and celebration, mishloach manot (sending of packages) each man to his friend, and matanot l’evyonim (gifts to the poor). The reason for feasting and being joyful is clear — this is after all a cause for celebration. What then is the relevance of mishloach manot and matanot l’evyonim, especially since they don’t appear in other holidays that we observe?

The answer is clear: these obligations reflect the theme of social solidarity and mutual responsibility — without which we would not have been rescued from destruction.

The significant actions we took in order to save our nation, as well as the ways in which we commemorate the holiday in modern times, are the foundations of our society. Feasting and celebration (always done in a group), mishloach manot to friends, and especially matanot l’evyonim, are acts of togetherness and solidarity, of supporting the weak and of strengthening our community. This is the centrality of the day with which we can truly celebrate Purim to the fullest.

If you are looking for a way to give matanot l’evyonim, donate to Paamonim and we hand-deliver your donation to needy families across Israel on Purim day, fulfilling your obligation. Click here to read more.