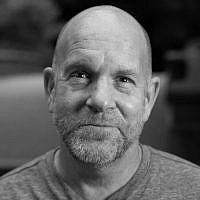 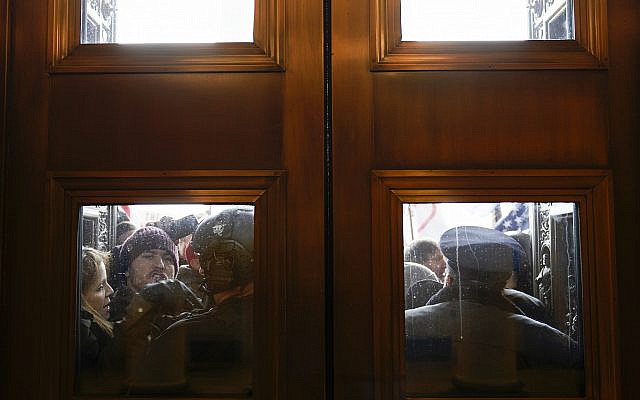 US Capitol Police try to hold back protesters outside the east doors to the House side of the US Capitol, January 6, 2021. (AP Photo/Andrew Harnik, File)

As the dust clears from the deadly insurrection at the US Capitol last Wednesday, incited by soon-to-be former President Trump, we must now take stock of how deeply Prime Minister Netanyahu’s warm embrace of Trumpism has damaged Israel’s place in the world. If not corrected quickly, the Trump-Netanyahu connection might threaten our future domestic solidarity. What we all just witnessed in Washington, DC is the natural outcome from four years of racist demagoguery emanating from Trump’s White House, whipped into a violent frenzy by media echo chambers, culminating in a seething mob seeking to overturn the legal results of a presidential election. Whether or not Congress or the Cabinet acts to remove President Trump in the remaining days of his tenure to prevent further chaos, this much is clear: Trump has done enormous harm to the fabric of American society, legitimized the politics of white supremacy, and perhaps irreparably impaired the United States’s sacred position as a global beacon for liberty and democracy.

We can debate later why Netanyahu chose to cozy up to the Trump administration and authoritarians elsewhere. Israel must, for its own moral wellbeing and position in the world, distance itself from whatever remains of the Trump presidency. For the sake of its own value as a Jewish state, it is time for Israel’s leaders to cleanse us of associations with racist, thug regimes even if such alliances can yield temporary gains. This is not merely a tactical readjustment for Israel in light of Trump’s electoral defeat this past November. Rather, our national psyche and our place on any kind of international moral high ground only suffer from these associations and proximity to unethical strongmen leaders who rejoiced at the sights of insurrection in Washington. It remains to be seen if the Biden administration can restore truth in governance while rebuilding America’s self-confidence following a terrifying slide toward chauvinistic authoritarianism and the politics of deceit practiced by the Trump administration.

Never before in Israel’s history has its leader so wantonly and ill-advisedly associated our country with a single American political party and, thereby, so blatantly alienated Israel from more than 50 percent of the US population, including the vast majority of American Jews who deplore Trump and Trumpism. Since pre-state days, the leaders of the Zionist movement and Israeli leaders have cultivated bipartisan relations and steered clear of American electoral politics.

For those unsure of what made the Trump presidency so antithetical to Jewish values cherished by our American cousins and countless others in liberal democracies worldwide, I’ll offer here a partial recounting: Trump’s stoking of white grievance in place of policy-making began during his candidacy, calling into question decades of efforts nationwide toward greater equity and historical reconciliation. In doing so, he mobilized xenophobia, nationalist jingoism, and vulgar isolationism to attain, then sustain, political power.

This began immediately after his inauguration in 2017 with a string of executive orders aimed at the exclusion of immigrants and refugees of color. Trump thereby violated America’s traditional role of sanctuary for the oppressed, spitting in the face of the American-Jewish experience. Other Jews could never forgive Trump’s mockery of disabled citizens or ridicule of former American POWs and combat veterans. American Jews also recoiled strongly at Trump’s tacit support and encouragement of racist mobs, highlighted by an unforgiveable equivalence he offered between white supremacists and counter-protesters following the violence in Charlottesville in August 2017. Trump’s systemic appointment of incompetent, unqualified “yes men and women” throughout government offended the values Jews place on education, accountability and fairness.

And many have been taken aback by the administration’s disregard for human life and their children’s futures demonstrated by unilateral withdrawals from environmental protections, international climate agreements and the World Health Organization. This disinterest in the sanctity of life has its gravest effects in the inexplicable abdication of responsibility by the Trump administration in dealing with the dual COVID-19 health and economic crises and the so-far deficient distribution of vaccines. And like more than half of the American electorate, Jews have been appalled by Trump’s conscious diminishment of truth, decency, the public good and the foundations of democratic, free society.

Looking back on the past four years, the Trump presidency has aided — certainly in the short term — the goals of Israelis who prioritize above all else Jewish settlement in the occupied territories. I remain skeptical, however, about how moving the US embassy from Tel Aviv to Jerusalem or the Abraham Accords with Persian Gulf kingdoms service Israel’s national security interests or its diplomacy beyond their publicity appeal. The marginalization of Palestinians as a result of the Accords, while perhaps temporarily comforting for some Israelis, will not help to solve the ongoing deadlock with these neighbors who are not going anywhere.

Prime Minister Netanyahu both prodded and applauded Trump’s unilateral withdrawal from the international agreement to restrict Iran’s development of nuclear weapons. When the treaty was first negotiated, Israeli security experts did not concur about its value. As we now know, Trump offered no replacement for the treaty and, as we know very well in the Mideast, life abhors a vacuum. So here again we have a Trump-induced publicity bump for Netanyahu that has yet to reveal itself as a true gain for Israel given recent reports about Iran’s nuclear program.

This propaganda campaign from our government has created — as ardent, crafty propaganda campaigns can — a false conception among many Israelis that Trump was the great hope for Israel’s future. The campaign has gone so far as to implant among Israelis widespread belief in disproved, venomous conspiracy theories spread by Trump and his allies about the sources of the Covid pandemic — and unsubstantiated suspicions about the validity of anti-Covid vaccines.

What can be said to our countrymen who mourn the end of the Trump presidency? Since Wednesday, the answer to this question must be superimposed on photos of Trump-inspired rioters bearing flags of the Confederacy while they sullied the halls of Congress. Those horrifying images must remind all good people how fragile democratic institutions and democracy itself can be when faced by self-interested, manipulative political leaders willing to sacrifice truth and demonize others to attain and retain power for themselves or narrow, violent constituencies. Second, the absence of accountability for actions among a country’s leaders will forever be toxic for democracies. Third, while some Israelis may sincerely regret the end of blanket White House support for one or another policy, we must never forget that our national security depends on broad, bipartisan support in the United States.

If these recent presidential elections and the senatorial runoffs in Georgia have proven nothing else, they show that the American electorate is now profoundly multi-racial and does not abide governance through hate and race-baiting. And finally, this rare vote against reelection of an incumbent president shows what can be achieved through political mobilization on behalf of justice. Trump-like “alternative facts” may be convenient for cynical governments, but they cannot withstand the will of communities united in a desire for better, more equitable lives for themselves and their children. Like the United States, Israel can thrive in a complex world when it inspires neighbors, not dismiss them, when Israel’s leaders welcome diversity and do not sink into expedient patriotic clichés or incite those who seek to overpower anyone they deem “others.”