NEW YORK CITY, NY—PBS stations across the United States have been broadcasting A Wing and a Prayer for more than a month. Yet, I feel like this hour-long documentary will air for the first time at 7 pm May 18.

That’s when the families of some of the unsung heroes featured in A Wing and a Prayer will gather at the American Jewish Historical Society in Manhattan (15 W 16th St.) for a special screening that includes a panel discussion and a reception. Most of them will be watching the film for the first time.

In effect, I’ll be watching A Wing and a Prayer for the first time, too. Until now, I’ve only seen it in my editing suite, where my fretful fingers keep me from ever kicking back and enjoying anything I’ve made.

I’ve waited intentionally. The New York City screening, which is open to the public, offers a rare opportunity to see A Wing and a Prayer through the eyes of the children and grandchildren of the World War II aviators who in 1948 risked their lives and U.S. citizenships to prevent what they viewed as an impending second Holocaust.

These pilots, flight engineers, radio operators and mechanics – who had more than paid their dues fighting for years during WWII – had good reasons to sit out the 1948 Middle East conflict. They had settled into normal lives, attending universities such as Columbia on the G.I. Bill, flying for airlines such as TWA, marrying their no-longer-patient high school sweethearts, and contributing to the baby boom. Their families begged them to stay away from this war. But they never thought they had a choice.

They took it upon themselves to save Palestine’s 600,000 Jews from being pushed “into the sea” by five invading Western-equipped armies. A UN arms embargo that even the U.S. enforced kept Israel from acquiring desperately needed rifles, ammunition, fighter planes and bombers.

The newly minted Israelis – including my parents, who were young children, and grandparents, who were Holocaust survivors and Russian pioneers – seemed as doomed as their European brethren a few years earlier.

But the aviators’ leader, the late Al Schwimmer, masterminded a James Bond plot to turn tragedy’s tide. The TWA flight engineer purchased decommissioned American aircraft; fixed them in Burbank, Calif., and Millville, NJ; smuggled them out from under the FBI and State Department by launching a bogus Panamanian Airlines; and airlifted swastika-stamped rifles, bullets and fighter planes from the only country willing to break the UN arms embargo, dollar-starved Czechoslovakia.

These Czech-made Nazi arms and fighter planes, flown in the 1948 Arab-Israel War to a large extent by Al’s recruits, sustained the Jewish state. Yet most people have never heard this story.

The May 18 screening gives us a chance to finally offer public recognition to Al and his team. His family – including his widow, son, grandchildren and cousins – will be there. The son of Charlie Winters, who served 18 months in Florida prison in 1949-50 for selling Israel two B-17s, will be there. And the children of Flying Fortress pilot Harold Rothstein will be there.

Oh, yeah, Harold Rothstein will be there, too.

A friend asked me whose hand I plan to shake first? My answer: Harold’s. This 93-year-old hero, one of the last remaining members of the operation, is flying in from Chicago May 18 to honor his old buddies.

Forget the handshake. I plan to give Harold a big hug.

I wouldn’t be here without him. 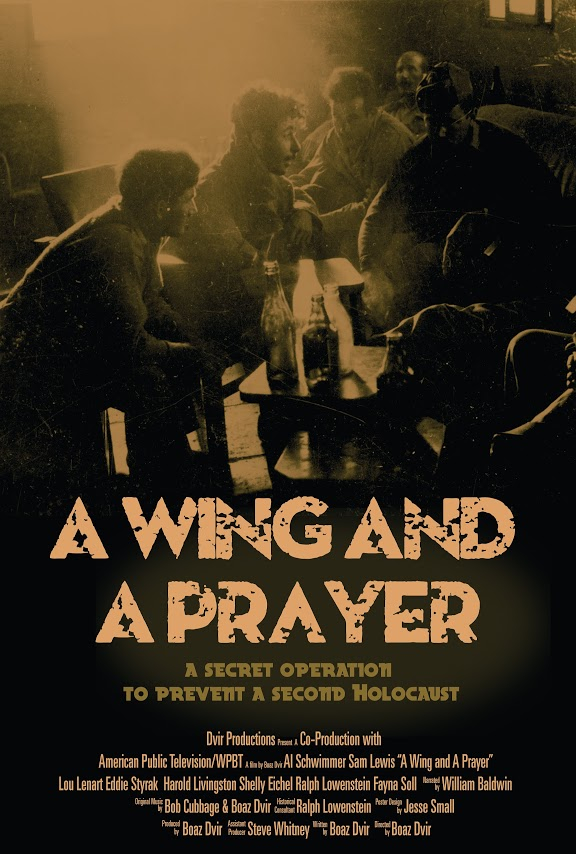 A Wing and A Prayer is a PBS documentary by award-winning filmmaker Boaz Dvir.
About the Author
Boaz Dvir is the author of “Saving Israel” (Rowman & Littlefield, 2020), which follows the journey of World War II aviators who risked their lives and freedom in 1947-49 to prevent what they viewed as an imminent second Holocaust. The Washington Times book reviewer Joshua Sinai described this nonfiction book as a “fascinating and dramatic account filled with lots of new information about a crucially formative period.” Dvir is also a Penn State University assistant professor and an award-winning filmmaker. He tells the stories of ordinary people who, under extraordinary circumstances, transform into trailblazers who change the world around them. They include an average inner-city schoolteacher who emerges as a disruptive innovator and a national model (Discovering Gloria); a World War II flight engineer who transforms into the leader of a secret operation to prevent a second Holocaust (A Wing and a Prayer); an uneducated truck driver who becomes a highly effective child-protection activist (Jessie’s Dad); and a French business consultant who sets out to kill former Nazi officer Klaus Barbie and ends up playing a pivotal role in history’s most daring hostage-rescue operation (Cojot).
Comments