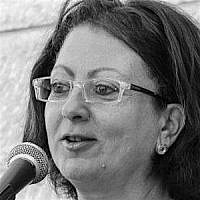 The Blogs
Esther Suissa
Apply for a Blog
Advertisement
Please note that the posts on The Blogs are contributed by third parties. The opinions, facts and any media content in them are presented solely by the authors, and neither The Times of Israel nor its partners assume any responsibility for them. Please contact us in case of abuse. In case of abuse,
Report this post.

Israeli society is famous in the place it accords its generals, war heroes, Zionist leaders in the past, and former prime ministers and presidents (those not incriminated in illegal procedures).  This is done by naming streets, schools, building monuments and other buildings. Yet practically no place in the public sphere is provided for the unsung heroes, those benefactors,  fundraisers and social activists who made and make Israel a better and more society to live in.  Today some of these benefactors insist on a high profile status (such as Sheldon Edelson and Rabbi Yehiel Eckstein) but the vast majority remain unsung heroes.

Marty Davis is one of these unsung heroes. He changed the face of Ashkelon as the head of Project Renewal in the 1980s and 1990s; he raised millions of dollars for hospitals, dental clinics, schools around the country (Dimona, Shlomi, the Northern confrontation line, Ashkelon), served as a shaliach in Ottowa continuing his Zionist work there and later within the World Zionist Organization. Tragically he died a few months ago at the age of 62.  Those who worked with him met a larger than life figure who left a massive imprint on their lives and became part of an extended Davis family member. Marty said that he wanted to put the “fun’ back into fundraising and used the old-fashioned foolproof method of persuading potential donors to invest in a project: personal charisma, integrity and Jewish warmth.

Yet apart from the mayors, workers and inner circles who were enlightened by him, for thousands of citizens, residents of development towns who enjoyed the fruits of his efforts: the dental clinics, the maternity ward in Barzilai hospital and tens of other projects, the name Davis rings no bell (perhaps the name of a tennis tournament).

Marty himself, despite his personal charisma and extroverted character did not want gratitude or the limelight: he just wanted to make Israel a better place to live for the average Israeli living in the periphery.  A colleague told me how Marty would go to an impoverished family’s home every Friday at lunchtime to eat couscous with the family so that they would not feel embarrassed by the financial assistance given to them through Marty’s efforts.

So instead of idolizing war heroes and media celebrities, lets give a dignified place in the public sphere to those who tirelessly worked (and work) for Israel’s individuals without looking for the limelight. In this way Marty’s legacy, (and others), will not remain within a limited circle of friends and colleagues but an educational tool for the future generations.

About the Author
Born in London, made aliya on my own at the age of 18 in 1986. Moved to Dimona in 1990 and becamde the UJIA representative there. Later worked for the Jewish Agency Partnership 2000 as representative of Dimona, Yerucham, Mitzpe Ramon. Married to Avi and mother of 5 children, 20 year old triplets, Asher, David and Yaara, Talia a 15 year old and Ariel 9. Currently working at Sde Boker.
Comments