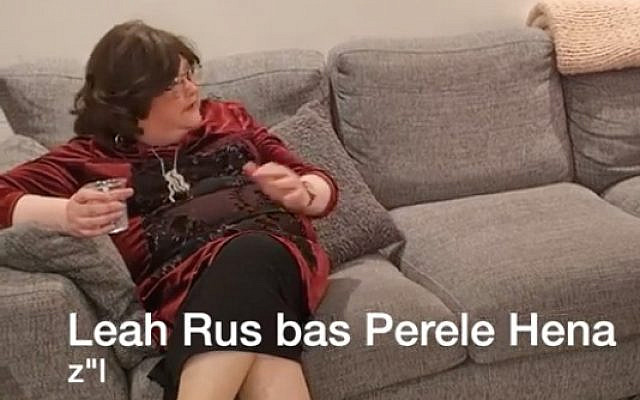 Leah, when I met with her in March 2022. (screenshot from video, courtesy)

Leah’s nightmare was to die an agunah, denied a Jewish bill of divorce, chained to the man who she said abused her for decades.

Leah was born to a Hasidic family in Stamford Hill, London. Of her upbringing, she said, “From when I was tiny, the only thing that was ever ingrained in me was that my goal in life was to get married and have children. So much so that when I wanted to study for an exam or do something that wasn’t compulsory, I was told, ‘You don’t need this to check Pampers.’”

Leah married, had six children, and lived for years with what she described as emotional manipulation and psychological abuse. “He never told me no, she said. But he would say things like, ‘The dress you made, it’s not even nice, I don’t know why you’re wearing it. Why are you going out with those weird ladies they’re not really your friends. Why do you listen to that horrid music?’ Slowly, slowly, he chipped away at my confidence. So you stop listening to the music, you stop buying the clothes, you stop going out…But if you ask him he’ll tell you, ‘I never told her she couldn’t…’”

Leah reached out for help. Her rebbe told her to give it another try. A rebbetzin she asked for help said she should “be glad he didn’t hit you.”

She asked a beit din (rabbinic court) to intervene and get her husband to change his behavior. The court sent Leah herself for a psychiatric evaluation, in which she was assessed as being anxious due to her circumstances, but entirely mentally competent.

The court arranged a trial separation, but Leah said the psychiatrist who was part of the arrangement put intense pressure on her to take her husband back after just six weeks of the 12-week trial. The judges suggested she take antidepressants.

Leah spoke often about the condescension she felt from the dayanim (judges), as though they were patting her on the head, suggesting that if only she would be better, and do better, everything would be fine.

Things at home did not get better. Though her friends helped where they could, she felt unsupported by the community. The last straw for Leah involved a ruined bat mitzvah party she had thrown for her daughter. She left, taking her two youngest children with her, and in 2013 filed for divorce in her local beit din, Kedassiah, an organization she was raised to trust.

Over the years, as Leah waited, her health deteriorated. She was diagnosed with a chronic lung condition that was exacerbated, according to her doctors, by the stress of her situation.

Her husband was a no-show to all five of the hearings of their case in beit din. Leah said that during that period, he sent her threatening text messages and made harassing calls from different numbers.

When she asked the dayanim for help, she described being shrugged off. “What do you want us to do, bring him here in chains?”

In her 40s when she started the process of seeking a get, Leah was questioned as to why she even needed a get given their view that a woman like her was unlikely to remarry.

Over the past few years, Leah’s health declined. She was put on oxygen. She was in and out of the hospital with secondary issues. She had limited mobility. Throughout, she still fought for her freedom. She did not want to die chained to this man. 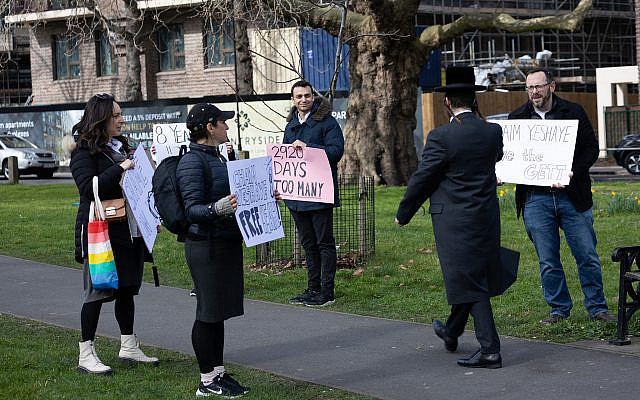 In 2020, Leah enlisted the help of GETToutUK, an organization that represents people seeking Jewish divorce. Finally, she had allies, people who believed her and respected her right to be free.

At that stage, in the face of the husband’s refusal to cooperate, the beit din could have taken action by issuing a seruv contempt of court order. Seruv would pave the way to have the husband declared a sarban get, a get refuser, and also allow for community sanctions to be placed on him, including shunning from shul, not being counted for a minyan and more. But the beit din refused to issue the seruv, claiming to be concerned it could potentially impact the husband’s mental health (there were no indications on record to suggest it might).

Issuing a seruv would have paved the way for granting Leah the halachic status of being a mesurevet get or agunah. In cases such as Leah’s, until the court issues a seruv and declares a woman officially an agunah, they don’t count her as one, no matter how desperately she wants a divorce or how long she is refused one. Because Kedassiah never issued a seruv, they denied Leah the status of being an agunah.

He failed to understand the torture of being married to a man who Leah experienced as having emotionally manipulated her – and continuing to do so.

Kedassiah did give tacit permission for the “get ladies,” as they called GETTtoutUK, to hold a demonstration. “Keep up the pressure,” they wrote to the organizers. In March 2022, I joined them, and we stood at the side of the road in Stamford Hill and called on Leah’s husband to release her. 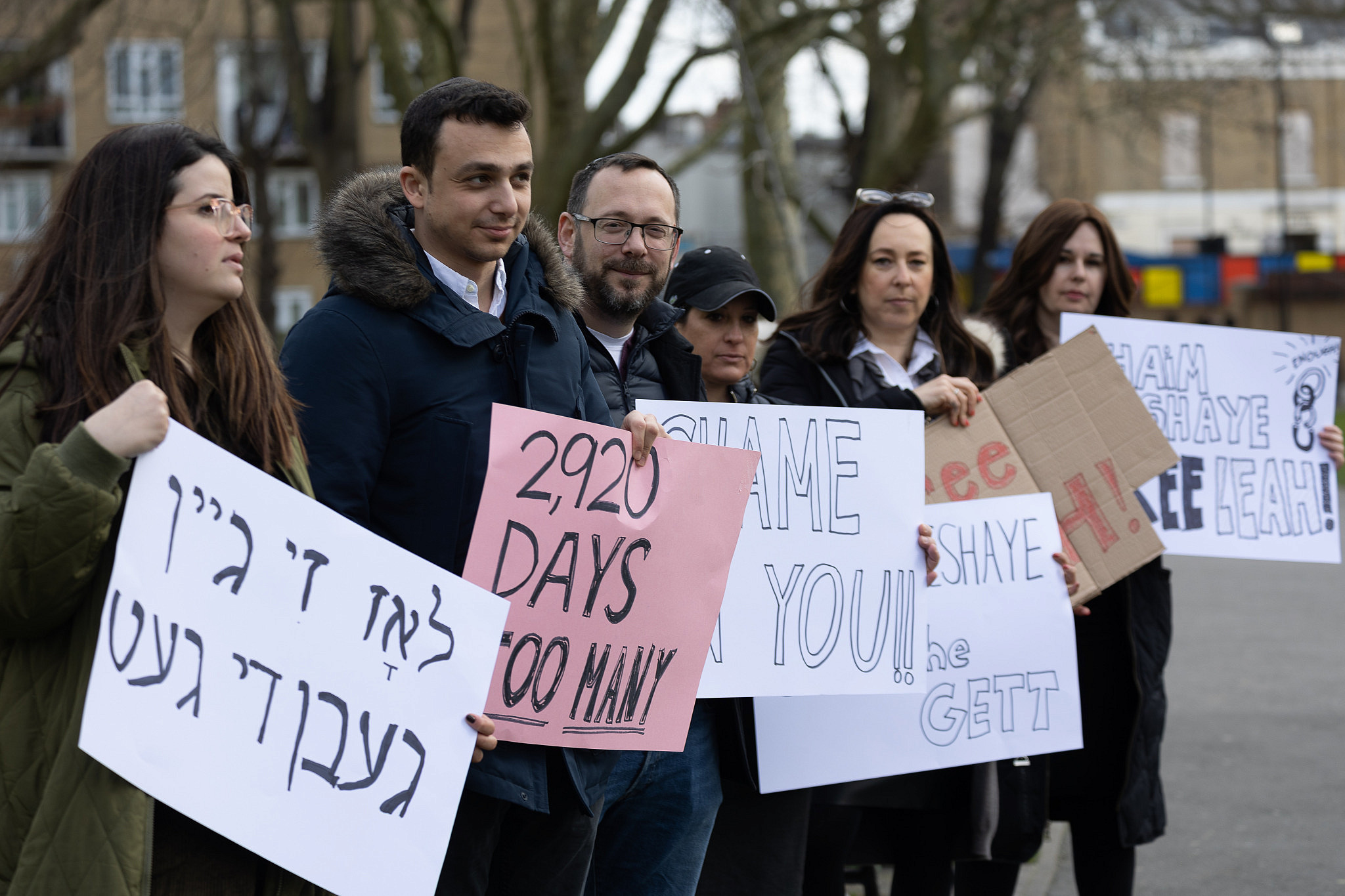 Leah’s health deteriorated. She knew she was dying.

She did not want to die married to her abuser, still bearing his name. Leah told the dayanim that she did not want him at her funeral or sitting shiva for her. They assured her that they would honor that request.

Thursday night, Leah died, an agunah, chained to the marriage.

The man Leah viewed as her abuser was at her funeral. He is sitting shiva for her. The dayanim of Kedassiah stayed away.

They would surely say, “our hands didn’t shed this blood,” but those who see women as property, to control and not as people deserving of dignity, those in positions of leadership who fail to lead, those who tie their own hands instead of reaching them out for justice, the community who stood by and watched the protests, who didn’t step up, those who said it is immodest for a woman to publicly demand her freedom — they have all shed this blood.

When we interviewed Leah in March, she told us her story and she asked the community for three things, which I would like to share with you:

1 – LISTEN when a woman comes to you. No woman wakes up one morning and decides, “I think I’ll get divorced today…” I tried. I ran away. Nobody listened.

2 – HELP OUT. There is no help out there for separated or divorced women or their children. My son had no one to learn with him.

3 – Every beit din needs a woman professional. They need to understand that a woman isn’t coming there because they’re “emotional” or “moody.” She’s there to get help.

Many people who have heard this story asked how they can help. Partially as a result of Leah’s experiences, and in collaboration with three other organization Chochmat Nashim, the organization I cofounded, created Rate My Beit Din. It allows people who have experienced beit din for divorce to share their experiences and literally rate their beit din. It also allows people to choose what beit din to file in based on the ratings that exist. Leah never had this choice. If she had, odds are she never would have gone to Kedassiah, and perhaps her story would have been different. We know that knowledge is power, power to choose a better service, and power to expose injustices.

Yes, the system has its own difficulties, but all batei din are not created equal. Some are empathetic and deal urgently with cases of abuse. Some dayanim understand that every day of experiencing this deep pain is another day of freedom denied.

What can you do?

Together, we can raise the standards in batei din, report those who do not understand how to deal with cases of abuse, and support those who see women as people, deserving of dignity and freedom.

We are committed to honoring Leah’s fight and her memory by improving the beit din experience and ensuring that dayanim understand and work to diminish the pain of waiting for one’s freedom. Together, we can ensure no more women die in chains.

Leah Rus Bas Perele Hena z”l
May her memory be a revolution!