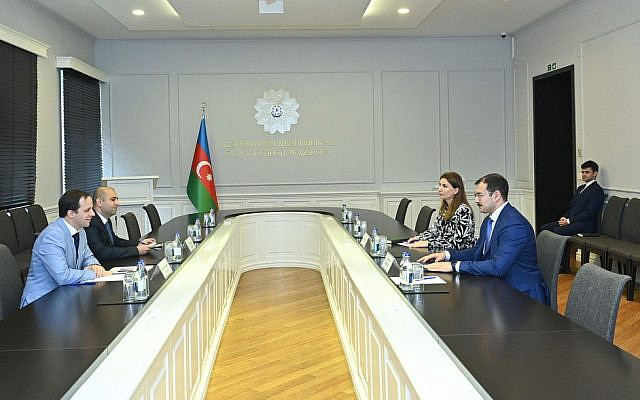 Photo courtesy of the author
BAKU, October 13 and 14, 2022. Within the context of a regional UPEACE visit to the South Caucasus countries, Dr. David Fernandez Puyana, Ambassador, Permanent Observer of the University for Peace to the United Nations Office and other international organizations in Geneva, maintained high level meetings in both the Ministries of Culture, Education and Foreign Affairs. The visit to Baku was successfully organized by the Permanent Mission of the Republic of Azerbaijan to the United Nations in Geneva.
On 13 October a meeting was held with H.E. Mr. Elnur Aliyev, First Deputy Minister of Culture, in order to strengthen their partnership in the so called Baku Peace Process and the program Culture for Peace. Another meeting also took place with Dr. Fariz Ismayilzada, Vice-Rector of ADA University, with the purpose of preparing new avenues of cooperation. In light of the fruitful agreement signed by ADA University and UPEACE, both agreed to reinforce their partnership.
On 14 October, a meeting was held with H.E. Mr. Mukhtar Mammadov, Deputy Minister of Science and Education. UPEACE offered to the academic community of Azerbaijan a wide range of higher education studies in the field of peace and security, international and environment law, diplomacy or human rights. Both institutions will find ways of cooperation.

Later another meeting took place with Mr. Marat Kangarlinski, Director of the Department of Humanitarian and Social Affairs of the Ministry of Foreign Affairs of the Republic of Azerbaijan. Important proposals were identified to expand their partnership in the field of peace education.