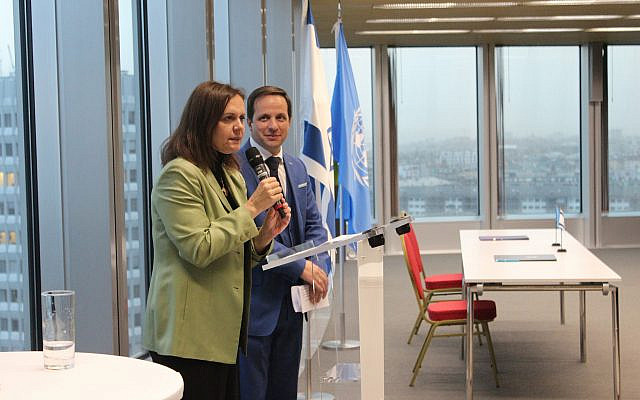 On 23rd November 2022, the Israeli Ministry of Foreign Affairs’ Personal Training Department and the UN University for Peace signed in Geneva a Memorandum of Understanding to create academic programmes and modules on mutual interests for Israeli Diplomats and other civil servants.

During the ceremony, Dr. David Fernandez Puyana, Ambassador and Permanent Observer of UPEACE started his short statement by expressing his deep gratitude to Ambassador Meirav Eilon Shahar and her team in Geneva –Ms. Adi and Mr. Nathan-, as well as to his dear friend in the Israeli MFA –Ambassador Aviva Raz Shechter for making this cooperation possible.

He underlined that for UPEACE, it is a real honour to sign this Memorandum of Understanding with the Ministry of Foreign Affairs of Israel. Like other agreements signed by UPEACE with some diplomatic academies, such as in Saudi Arabia, UAE, Georgia, Armenia, Azerbaijan and Egypt, this current MoU will open new opportunities for the mutual cooperation between the  Israeli MFA Personal Training Department and UPEACE.

Additionally he added that UPEACE believe that education for Peace is the key for creating better conditions for a dialogue and for reaching a compromise. This agreement will also allow us, he said, to contribute to this vision and give better skills and tools for diplomats, who are the real practitioners on the ground.

He recalled that in September 2021 Bahrain, Israel, UAE, Marroco and UPEACE presented for the first ever in the history of the United Nations a joint oral statement on women, peace and diplomacy, with the support of more than 70 States. Later, in February 2022,  UPEACE joined the initiative led by the Special Envoy on Women, Peace and Security of Israel, in the context of the Abraham Accords, to have two events during Expo Dubai where best practices will be shared regarding promoting women’s empowerment and leadership in Science, Technology & Diplomacy.

Later, he underlined that on the basis of this agreement, new peace initiatives will come out by the Israeli MFA and UPEACE with the purpose of strengthening our actions in the field of peace education both at the multilateral and regional level. In this regard, He gave some successful examples, which could inspire our future peace actions. With our support, the main leaders of the Muslim World League, the World Jewish Congress and the Holy See initiated a very important process on interreligious & intercultural dialogue in the city of Jeddah (Saudi Arabia), which continued successfully in Malaga (Spain) and later it will be happen at the European Parliament in Brussels.

Creativity in diplomacy is a fundamental asset to find solutions and divert tensions in the world. This agreement signed today in the United Nations is a proof and reflection of our aspiration and commitment to  peace and dialogue, he added.

He ended his statement by saying: Let’s create together innovative educational actions for Peace at the multilateral and regional levels! Let’s raise our voice for the end of all conflicts in the world! Let’s extend our hand to all countries and peoples regardless of their faith and religion! Let’s make the dream of Peace a reality!