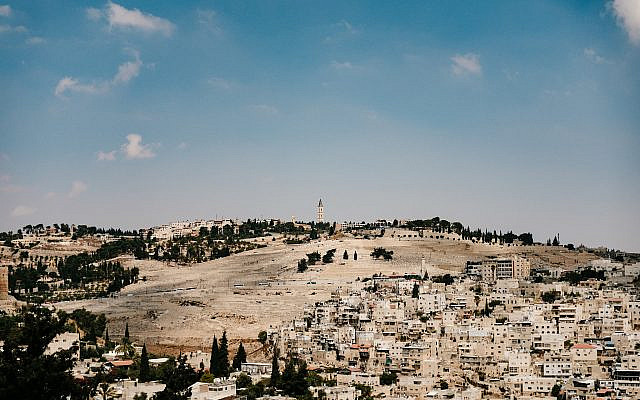 Once we boarded the flight, I was fighting my older brother for the window seat. I won the treasured spot on account of my lungs. I looked at my brother next to me.

“As high as Superman?”

“Why are you asking me so many questions? You know how high.”

“As high as the clouds,” I said, looking out the window, “and higher than the birds.”

I was sitting next to the right wing. It was all anticipation and then the plane started moving. And when it rolled fast enough to take off with my face stuck to the window, I saw the ground drop, or Israel drop, my country drop, and I waved goodbye.

I felt my mother’s eyes upon me. She sat next to my brother, in the aisle seat, holding my half Arab half Jewish grandmother’s rosary in her hands.

Miami is flat and everyone is beautiful and the girls are delicate. That’s what my brother says. “They are so delicate, they break easily. That’s how delicate they are.”

My mother came to Miami for the first time in 1964 with my grandmother. On their flight to Miami one of the engines stopped working and everyone on the plane held their breath. My mother and grandmother held each other. Fortunately, the pilots got the engines started again. My mother said she had never been so scared her whole life. She was twenty-two. Miami was a lot smaller back then. They had made the long trek for fun in the sun, and my mother’s nose job as Israel fought for its right to exist. The war and the talk of the territories, my grandmother told her, will still be there when they got back. My mother never regretted it.

When the plane reached its highest altitude I no longer paid attention to the ground, but instead the right wing tearing through endless white, fluffy clouds.

“If I was Superman I could fly right next to the plane. I wouldn’t need a ticket.”

“I could build wings.”

“What if you fly too close to the sun? You will burn up.”

“I would make sure not to fly too close to the sun.”

“You have tiny wings.”

I didn’t have tiny wings or any wings. He thought he was clever. When we were in checking he caught me looking at a girl in a blue and white dress. Since she was pretty and my brother noticed my distraction, he wouldn’t stop bugging me. She was with her father, who looked like a worn out rabbi who had seen too much.

“Do you want me to talk to her for you? I can ask her for her phone number.”

“No, please no,” I begged grabbing his arm.

I grabbed his arm harder.

My mother looked at us. “Stop bothering your brother.”

“You’re such a scary cat,” he said, putting his right arm around my neck forcing me to look at her. “You know you love her. Why deny her? Look at her.”

I looked at her again. She was like an angel.

“You secretly wish you could marry her, don’t you?”

She noticed us. I wanted to run away but I couldn’t move. Her eyes were like black pools; I wanted to dive inside them. I didn’t have time to truly see her. I regret not smiling. I don’t think I will see her again.

“She is beautiful, isn’t she?”

Her father the rabbi held her right hand as he checked his two suitcases. When they finished, she glanced back at us and they went off to find their flight. I immediately stepped on my brother’s foot.

By mid-flight almost everyone was napping. I couldn’t sleep; I was too excited. My mother slept with a pillow in the back of her neck and my grandmother’s rosary still wrapped around her right hand. She must have felt my eyes because she awoke.

“Aren’t you tired,” she said softly, trying not to wake my brother.

I nodded and smiled.

“Are you excited for Miami?”

As we talked, she rolled the rosary in her hands.

“Are you going to miss grandma?”

She studied my face. “What do you think we should get her?”

“We should bring her with us next time.”

“We will. Grandma would love that.”

I slept the rest of the 12 hour flight. In my sleep I dreamed about my grandmother in her wheelchair surrounded by my cousins, uncles, and aunts all waving good-bye in long desperate arcs like little spiders trying to hug Godzilla. I was above them. I was above all of them. Towards the end of the dream my grandmother put both of her soft, trembling, delicate hands on my face, laughing hysterically almost screaming: “You are no longer artless. Now tell me a story!” I didn’t have any stories back then. I awoke to the pilot’s voice announcing our arrival. When we landed in Miami, I didn’t think about Israel for 26 years.

About the Author
Fawzy Zablah was born in El Salvador but raised in Miami. Among his works is the short story collection CIAO! MIAMI and the novel RARITY OF THE CENTURY. His fiction has been published widely at Hobart, 3AM Magazine, Acentos Review and Expat Press. His short story, THIS MODERN MAN IS BEAT, was adapted into an award winning short film in 2015 currently playing on Amazon Prime. He is hard at work on a novel about the Arabs and Jews of Latin America with the working title of GITANES.
Related Topics
Related Posts