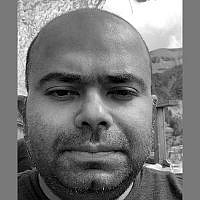 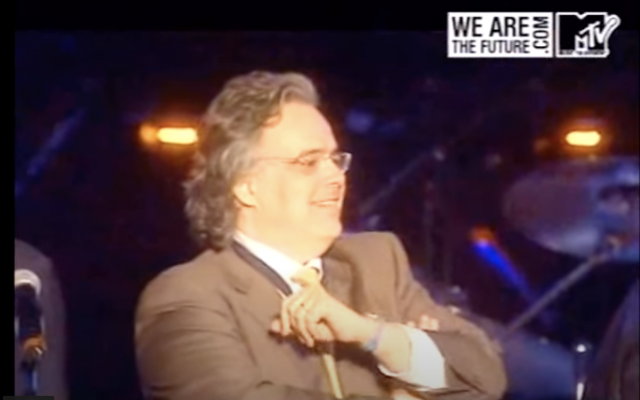 Uri Savir at the We are the Future concert in Rome in 2004, screenshot from youtube video.

I met Uri Savir on a hot July day in Rome in 2003 at his office near the Spanish Steps. He was typically four hours late for our meeting and the air-conditioning in his office was broken. I was a young start-upper, looking at a change in career after moving back to Italy from India. He was a former diplomat who headed an NGO in Rome with the ambitious plan of creating a marketplace for cities, saving youth in conflict countries and achieving peace in the Middle East. I had no idea who he was. Nulla, nada. I was just remotely very upset at being made to wait by a young assistant who nervously passed every half an hour or so to see if I was still there (or if I had passed out).

Despite the initial rancor, we spent most of what was supposed to be my interview, discussing peace in the Middle East, Africa, hunger and the World Bank. This started a friendship, which kind of got me the job.

In September 2003, I embarked on a journey, what would be the semblance of the only “job” I have ever held, with Uri the only “boss” I was to ever have. When we spent time together, we discussed, argued and almost never saw eye to eye on issues. While Uri fancied himself a dictator in his office (he would often mimic Peres while declaring that democracy ended when one entered his office), he was the most democratic “boss” you could ever find. He took criticism easily even though he hated to be criticized. He could be obstinate, stubborn, and arrogant, but he was committed and admitted easily, albeit grudgingly, if he was wrong.

But Uri was also a friend, a brother, a warrior for peace. His laugh was infectious, and he really believed in the spiel he sold, rare for a diplomat and politician. He believed in working with young people and was often the youngest at heart in the room. His sense of humor was legendary, and you spent most of the very long staff meetings in splits.

We had agreed, on that hot day in 2003, that it was unlikely our “partnership” would have worked for more than three months. We were very different as people, and we promised to work together for two years. I ended up working with him for five years and left only because it broke my heart to stay any longer.

While Uri the man, the child, the person was special, Ambassador Uri Savir, “the architect of Oslo”, was a brilliant diplomat, strategist, and thinker. I was proud to call him my boss and honored he called me his friend. His dedication to the state of Israel, its security and its future was unparalleled. He strived to save humanity. He believed that in conflict it is the women, the children and the vulnerable who suffered the most and strove to empower youth as agents of peace and change.

Above all, his belief in the two-state solution was unshakable as was his belief that for the future security and prosperity of Israel, peace with Palestinians was not just essential, but also a duty. He also believed that people-to-people peace was essential to the success of any agreement that may happen between Israel and Palestine. He was a workaholic who was admired by men much older than him, whether it was Shimon Peres or former World Bank President Jim Wolfensohn.

Despite having resigned from his role in the Ministry of Foreign Affairs, first, above all, Uri was Israel’s devoted diplomat and soldier, working tirelessly for peace in the Middle East.

Over the years we remained in touch, not as often as I would have wanted. Despite hearing of his ill-health in the last years, I was convinced that Uri would be back. To me he was always the optimist and frankly unbeatable. But it was not to be. He touched the lives of all he knew and left an indelible mark on history, which I hope will result in his dream of a peaceful two-state solution, one day.

Uri was laid to rest on the 16th of May, on the 18th anniversary of the “We are the future” concert he initiated in Rome in 2004, with Walter Veltroni, the Mayor of Rome, Quincy Jones and Hani Masri. It was probably the most important achievement of his life, after the Oslo accords. He left us too soon, with shoes too big to fill, in a Middle East that is so polarized that we crave for a ray of hope. But Uri’s passing also calls for all those whose lives he affected, to continue his work, his dreams and ensure a peaceful Middle East and a secure Israel.