I have previously noted that the United States Jerusalem Consulate either ignores or discriminates against Jewish revenant residents in the areas of the new post-67 Jerusalem neighborhoods (which are situated north, south and east of the former Green Line) and Judea and Samaria in matters of State Department financial assistance and aid, programs involving education, sports, art, music, science, etc. and well as democracy and civil society activities. Also, its Facebook account is bilingual only, no Hebrew.

For example, as you can see here, Jews are excluded from this despite living in the area: 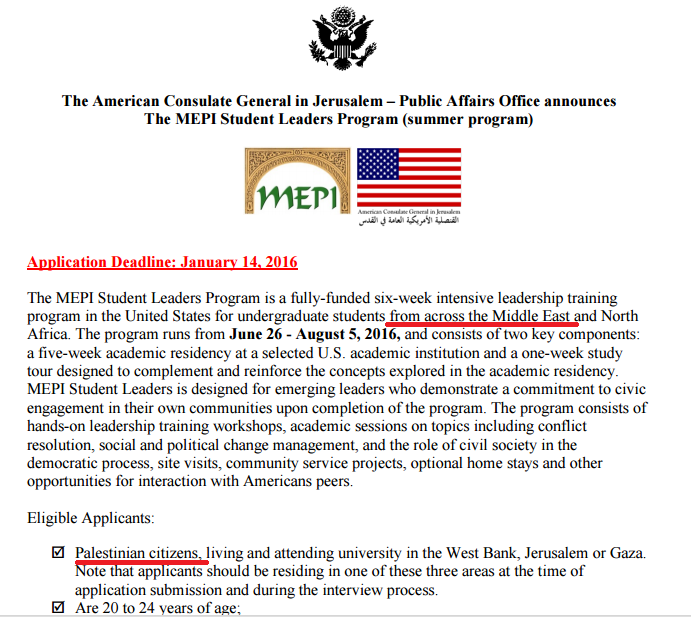 If Arabs were excluded from an Israel-based program, you know what the reaction would be.

Another aspect is cooperation between the two populations. These type of programs, being non-political, could be a wonderful method to attempt to forge coexistence and cooperation and mutual understanding. And, ultimately, peace.  Peace is between peoples.

I found one, but it seems it took place in Israel, even though both the Ambassador of Consul-General were present:

Why can’t Shilonians play Turmos-Ayans?  And I wonder, were those “Palestinians” actually Israeli Arabs (at least one game, I see, was between two Israeli towns/villages, Kfar Saba and Meiser) or bona fide residents of Area A, B or C?

Why doesn’t the US promote these reach-out initiatives?  Or is the thinking that demonstrations should be promoted, as Tom Pickering urged Hillary Clinton?

First and foremost, the US State Department should be promoting peace, that is, to convince the Arabs to yield their plans for violence and their ideology of hatred and to cease their incitement.  Borders are secondary, although for the Palestinian Authority, it would appear that no borders should apply to Israel.

So, Secretary John ( “I mean does Israel want a third Intifada?”) Kerry, what’s it to be: intransigence or openness?  Aid and assistance to all, or to discriminate against Jews living in their historic homeland?  Do you realize that this policy of yours, and your predecessors, encourages the most hard-line of positions, and first of all that Jews cannot live among “Palestinian Arabs”?