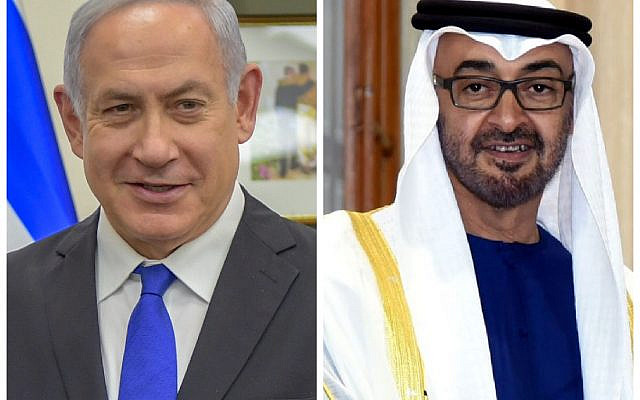 For the first time in his presidency, and with an election just three months away, Donald Trump this week showed ‘the art of the deal’ by presiding over a most unlikely yet earth-shaking geopolitical matrimony.

Regardless of whether Trump was the brains behind, or the signature fronting Thursday’s announcement that Israel and the United Arab Emirates were normalising ties, it was nevertheless stunning, in part because vanishingly few saw it coming.

This US-Israel-UAE deal was a win-win-win. In fact, it was a win-win-win-win if you count the Palestinians, given that large chunks of the West Bank will not soon be coming under Israeli sovereignty as a result.

If you go further and count the other Gulf states itching to follow Abu Dhabi’s lead, it represents a quintuplet of wins. If only the Arab world officially drank, we’d raise a glass and say ‘L’Chaim’.

Let’s start with Israel. This is huge. It is the gateway to a world that is supposed to hate the Jewish state and everything it stands for. In myriad industries and arenas, this is the opportunity of a generation. Seven decades after crow-barring its way into the region, the Gulf die-hards finally accept it. Hashtag #huge-huge-huge-huge-huge.

Next, Trump. He’s been longing for that certificate that says he did something historic to advance peace in the Middle East, and now he has it. Until this week he only had the shredded remnants of Obama’s nuclear deal and his son-in-law’s wet lettuce peace push widely derided by almost everyone. Now, a Nobel Prize awaits. Deep down, he must scarcely believe it.

As for Abu Dhabi, this would have been an almighty gamble were it not for a Crown Prince whose expert massaging of public perception has inched Emiratis towards acceptance, most recently with a joint UAE-Israeli hunt for a coronavirus vaccine. ‘If them Israelis are going to help us find a cure, they can’t be too bad.’

Now consider the timing and the motives. Trump, facing almost certain defeat by Joe Biden, now gets to tell would-be benefactors that he’s forged an historic peace agreement to protect Israelis, while telling progressives that he stopped Israel annexing large parts of the West Bank. For him, there really is nothing not to like.

For Netanyahu too, facing protests against his rule and a corruption trial eroding his credibility, this could not have come at a better time, or in a better way. Despite what he says, especially before elections, the Israeli PM really didn’t want the hassle of annexation, what with the prospect of coalition splintering, diplomatic isolation and disquiet from settlers wanting more.

Now he gets to put it all on the backburner and tackle this viscous second wave of coronavirus infections while claiming that the prize for waiting is a game-changing détente that only he could have pulled off.

Then you have the Gulf. Dripping rich but alliance-poor beyond its immediate vicinity and Western arms exporters, the Sunni kingdoms know their enemy’s enemy is their friend, and in Iran they share common enemy with Israel. They also know that Jerusalem wields both know-how and clout. The benefits are enormous.

In short this was, for all concerned, a remarkable feat, one whose back story will no doubt be told by dinner party speakers over the next three decades, but whose effects will be felt for much-much-much-much-much longer.