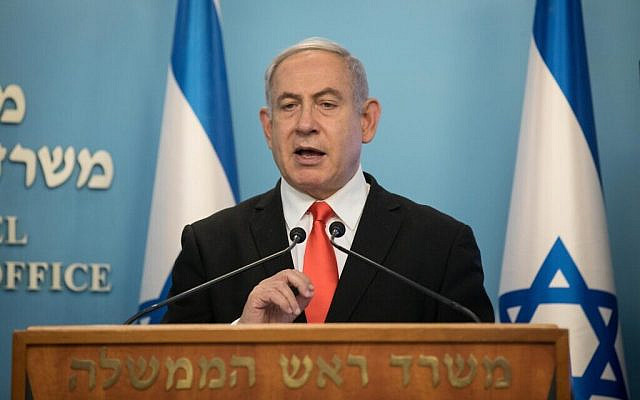 Some people think that if Donald Trump loses in November, he might seek ways to not honor the result, by claiming fraud perhaps. That has seemed fantastical to me, almost inconceivable, even for this president and even at this time.

But these are fantastical times, and not just because of the coronavirus, and one wonders whether anything is inconceivable anymore. For evidence of how things are slipping into utter disarray, Americans and indeed the world need to look no further than Israel.

I address this to US Jews, who have typically been either relatively disengaged, or supportive of any government in the self-styled “only democracy in the Middle East,” with relatively little in between. The latter position is high-minded in a way but no longer makes sense.  Take a closer look, and if you don’t like what you see, speak up: Israelis will care.

The centerpiece of our story is that Benjamin Netanyahu lost the March 2 election, even though Israel’s electoral system clouds the picture and you might be understandably confused. A majority of 62 of 120 Knesset seats were elected on a platform of removing him, and the president has tasked challenger Benny Gantz with forming a new government. Netanyahu now labors to delegitimize the result while his trial on charges of bribery looms. This once-inconceivable situation follows two years of agitation against the custodians of the rule of law, and the coronavirus has been mobilized to his ends. Here’s the lowdown:

Over 100 retired senior judges issued a letter bemoaning “the destruction of Israeli democracy.” The plan quite plainly to make it appear as if the courts took sides, and to mobilize Likud supporters against the system as it prepares to take on the cases against Netanyahu.

The runup to this has seen Netanyahu riling up his base with claims that the police is crooked, the prosecution is framing him, and that “leftist” judges have been assigned to his case. All of it is baseless and somewhat absurd: the police chief was a religious former settler widely seen as a political appointment aimed at shielding Netanyahu (itself shocking at the time); the attorney general is a religious crony who was widely expected to do the same (there was again much hand-wringing in that quaint time a few years ago), and he indeed has been criticized for dragging out deliberations,  shaving the charges to a minimum, and mysteriously shelving other damning cases.

It was plain that had Netanyahu won he would have machinated to put off indefinitely his trial and passed legislation overriding the supreme court. He was also widely expected to fire the disappointing formerly loyal attorney-general (who in Israel heads the prosecution). He did manage, just in time, to again buck convention by appointing a pliant state comptroller.

TV appearances by Netanyahu and his cabal now feature wild attacks on the media itself – outdoing even Trump on this score, reaching comical heights of marching out of studios. The broadcast  media in Israel has actually been cowed, and hardly troubles any more with the absurdity of a prime minister “serving” while on trial. This is the Netanyahu who in 2008 called on Ehud Olmert to resign, arguing that prime ministers cannot serve while under even police investigation, because that could taint their decisions and erode trust. The law strangely allows it, but decent society does not (which was the widely held position even in Likud up to a few months ago).

By carrying on this way, Netanyahu has taken the country to the edge of sanity. Many Israelis are  horrified, and Likud itself has been cleansed of almost everyone with any ethical standing – including Benny Begin, the hard-right son of its founder and first legendary prime minister, who openly supported Gantz.

Now the spin machine argues that in a time of crisis political interests (other than Netanyahu’s) should be cast aside and stability is critical, while Netanyahu lectures nightly on TV about handwashing and casts himself as the indispensable slayer of the plague.

Gantz faces the cruel choice of capitulation and serving under Netanyahu in hopes of saving what is left of democracy –  or continuing the standoff, trying to replace him, and risking a fourth election with millions voting in face masks masks while maintaining social distancing.

Dear US Jews: One option is for the liberals among you to be disgusted by all this, and turn away. But there is another option which is to get involved and have your say.  I can tell you that most Jews in Israel – even liberal ones who detest the current government – have generally appreciated your unqualified support. But there is a limit. Get involved; make clear your disgust; and Israelis of all stripes (well, many stripes) will listen.

Netanyahu is admired for his eloquent American English and wily ways in debate. I remember that as an American student in the 1980s I found him a joy to watch on Nightline. But it is time to put away childish things. Even if you support Netanyahu’s policies –  which will make Israel a place half of whose residents are Arabs, most of them lacking voting rights, and which inches toward theocracy by the day – you should understand with he is overseeing the Putinization of Israel. Be not fooled by a shiny toy.

Assuming you are not, the next step is to cast aside the view that outsiders don’t have the right to an opinion. It has some value but ultimately is wrong. The more extreme a situation, the more wrong it becomes.  That is more true than ever in a globalized world, when each place affects the others. I have never been to North Korea but I have opinions about it and I imagine most readers who know anything about the place feel much the same.

Netanyahu’s Israel is not North Korea, and it is not apartheid South Africa, but it is headed rapidly toward Orban’s Hungary and in a plausible scenario could approach Erdogan’s Turkey. Whichever the comparison, the same principle applies: you have a right to an opinion.

You would have that right even if you had no connection to Israel, as I have none to North Korea. You have that right all the more when connection exists.  Israel comes knocking at your door when it needs your support. Israel offers you a second home. In ways direct and indirect, Israel’s leadership sometime speaks in your name, however inadvisable that may be. Israeli misbehavior can affect you at home.

Israel demands fealty from you and rather expects it from all Americans in the name of shared democratic values. So you have a right to say that you cannot share in this. You have a right to write AIPAC, the Jewish leadership, Israeli diplomats in the US or your congressman.

Anyone has that right, but especially you. Some would say you have a duty.