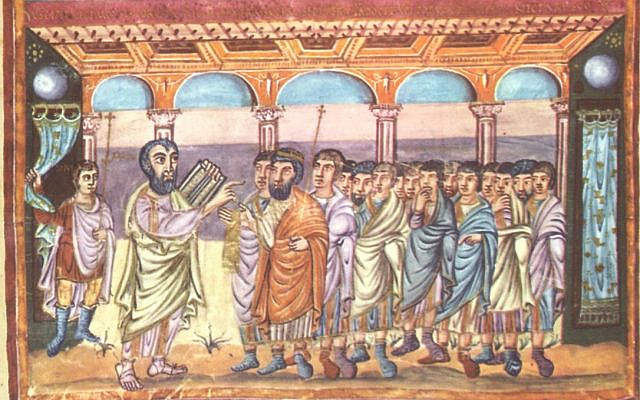 Moses reading the law to the Israelites, by Karolingischer Buchmaler, circa 840. (Wikipedia)

The Book of Deuteronomy is, in essence, the lengthy farewell speech of Moses in the final five weeks of his life and of his leadership of the Jewish people. It is replete with the iteration and reiteration of various laws, with the recounting of historical events, with rebuke, and with great love.

But, above all, it is a book of wondrous words, sublime speech, and unforgettable phrases. And what is rather marvelous about that is that this lengthy address emerges from the one who began his career insisting “lo ish devarim anochi” — “I am not a man of words,” as he implored God to choose another for the task of standing before Pharaoh to demand that he let the People of Israel go. Yet, it is precisely Moses’ “devarim” — words — that constitute an entire book of the Five Books of the Torah. As Midrash Tanchuma says “Yesterday, he (Moses) said ‘I am not a man of words,’ and today, he says, ‘These are the words.’”

How did Moses go from being “heavy of mouth and heavy of speech” to enunciating the sublime and timeless address that constitutes the majority of the final book of the Torah?  There were several contributing elements.

For one thing, he had, for 40 years, used his power of speech to convey the words, commands, and rebukes that were dictated to him by God. The words and phrases that emerged from his mouth trained him in the use of profound and even Divine speech. He had been, after all, the mouthpiece of God in presenting the Ten Commandments, variously known as Aseret Hadibrot or Aseret Hadevarim.

Another element was Moses’ experience at Mei Merivah (the bitter waters) when he transgressed God’s command to speak to the rock in order to bring forth water, and strikes the rock instead. Rabbi Tzvi Hersh Weinreb writes that Moses did not completely trust in the power and efficacy of words alone to produce the desired objective of providing plentiful water for the Children of Israel. That lesson was learned through the harshness of the punishment that resulted.

Perhaps the most important contributing elements were opportunity and urgency. Not only were the words to be chosen carefully, but the timing was of great import. This was Moses’ final opportunity to impress upon his people both the significance and the consequences of their future lives and actions. Rashi tells us that Moses understood that, while warnings and chastisement were necessary, they would be most efficacious if delivered close to his death. This would maximize the impact of his final words, a tactic that he learned from Jacob who addressed his 12 sons on his deathbed.

Rashi also points out that Moses understood that rebuke, to be effective, should be given in a veiled way, through allusion and suggestion, in order not to embarrass the people who might otherwise reject the difficult words. This reflects Moses’ sensitivity to and love for the people he had led for so many years.

Thus, Moses proves himself to have mastered the power of speech, that which distinguishes humans from the rest of Creation. In Genesis 2:7, we find the words, “And God formed the man of dust from the ground, and He blew into his nostrils the soul of life…” In Targum Onkelos, that last phrase is defined as “a speaking spirit” indicating that it is speech that is the defining characteristic of the human.

We appear to recognize that idea when we tell young children, “Use your words,” the popular and possibly overused child-rearing phrase with the purported aim of increasing children’s communication skills and enabling them to express their emotions verbally, instead of through tantrums or physical aggression. It is evidently based on the understanding that to be human is to be a “creature that speaks.”

It is no surprise, therefore, that it was Moses, the most highly perfected of humans, who not only “used” his words but also was sensitized to “choose” both his words and the timing of those words. He clearly understood that communication requires a relationship, an attentive listener as well as an eloquent speaker, in order to be effective.

Furthermore, it is intriguing that the word “devarim” can be translated as both “words” and “things.” In fact, the opening words of the parsha are “Eleh Hadevarim,” “These are the words.” We find this phrase echoed almost exactly in the morning prayers where we say “Elu Devarim,” “These are the things” — which refers to the meritorious acts whose reward is bestowed both in this world and in the next.

This so clearly emphasizes the wondrous yet sobering concept that our words can create realities which are sometimes more significant and weighty than actions or even material objects. It was the lesson that Moses learned at the rock and that we recognize from our own experience. Just as God created the world using words, so we create worlds of relationship, communication, teaching, and emotional connection through the careful using and effective choosing of our words.

We are “creatures of the word” as well as “People of the Book.” We should use and choose our words to create the world in which we would want to live. The world which we will also leave to future generations.