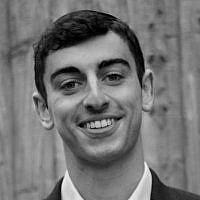 The Blogs
Avishai Marcus
Apply for a Blog
Advertisement
Please note that the posts on The Blogs are contributed by third parties. The opinions, facts and any media content in them are presented solely by the authors, and neither The Times of Israel nor its partners assume any responsibility for them. Please contact us in case of abuse. In case of abuse,
Report this post.

Two friends were walking in the desert. They were carrying nothing but a map and flasks of water. After days of trekking through the baking sun, they realised that they were down to their last flask– enough to sustain only one of them until the end of the trek.

This left them with three options:

How can you possibly decide what to do? Assuming that our two friends aren’t selfless heroines, they are probably fighting over the last drop. “I have a family to go back to”, exclaims Friend A. “I still have so much to give to my community”, pleads Friend B. “But my net worth is higher than yours”, shouts Friend A…

This puzzle bears parallels with those of vaccine nationalism. Regarded as a tragedy by some, justified as rational by others. Countries with higher GDPs and those with greater influence over big pharmaceuticals could procure vaccines throughout the pandemic. Whilst less wealthy nations struggled to secure vaccines for their people. To return to the parable, ‘Friend A’ represents the rich countries. Ethically speaking, should we really consider a nation’s GDP when deciding who does and doesn’t get vaccines?

On paper, the countries that have stockpiled vaccines must shoulder much of the responsibility for the asymmetry in vaccine accessibility globally.

Others have pointed out that the World Health Organisation (WHO) is also culpable. Their system of pharmaceutical patents and insistence not to share vaccine technologies naturally favours wealthier nation-states.

The criticism of the WHO and of vaccine stockpiles has taken two forms. First, herd immunity requires a global approach, not merely a national one. In that sense, vaccine nationalism is neither the optimal nor a pragmatic response. Second, there is the moral and ethical argument. Perhaps countries ought to donate some resources to less well-off states. Yet, with the UK borrowing at unprecedented rates,  spending cuts are needed somewhere, as shown by the UK government reducing its  foreign aid commitment.  Hence, increases in vaccine donations seem unlikely.

That said, why should this be of concern? What is the real threat here?

The danger lies in the precedent set for international relations and the future of international collaboration. Vaccine nationalism shows that countries can no longer rely on allies to help them in a time of need. For a nation to succeed in a global crisis, it must take matters into its own hands. There was no better example than the United Kingdom’s response.

Fresh out of the EU, this was the UK’s chance to justify its decision to exit. If the UK got this right, it would show the rest of the world that the UK can thrive as an independent nation-state, and we don’t need to rely on the 26 other members of the bloc.

Indeed, that is what happened. The UK ran an excellent procurement programme. There was a time when the EU’s vaccination rate was a fifth of Britain’s, not because of vaccine scepticism, simply because the EU didn’t procure enough vaccines for member states. The UK was proactive in signing its deal with AstraZeneca three months earlier than the EU. Member states could only watch from the sidelines, as their dependency on others failed them. This was hailed by many as the best advertisement for Brexit yet.

Yet, despite individual successes, like the UK’s, there was still a lack of effective collaboration and squabbling on the international stage. The vaccine situation was not the only example. Take the UK-France migrant crisis that has intensified over the past two years. An issue that is killing people weekly. The two countries still have not been able to cooperate to reach a solution. Vaccine nationalism is just a symptom of the next virus – a lack of international cooperation.

Arguably, this approach has repeated itself throughout Russia’s invasion of Ukraine. Whilst Western allies generally rallied together in support of the Ukrainian cause, there hasn’t been an absolute consensus on sanctions. Germany was tentative about cancelling the SWIFT payment system. Britain has been ahead of the curb in their support of sanctions against Russia. What does the future hold? Will countries simply label international crisees as ‘their problem’? A veritable Hobbesian war of all against all.

In the case of vaccines, one might argue that this nationalist approach was necessary because of the circumstances – the uncertainty over variants and the severity of coronavirus. Yet, this approach isn’t merely a result of the pandemic. The attitude of ‘me before you’ has seeped into the arena of global affairs and has become an endemic feature of our era of great power competition. This is the grave danger of the ‘realpolitik’ approach to international affairs. Proposed by Henry Kissinger, realism suggests that nation-states have are solely concerned about their own development. What we are seeing today is the latest expression of this theory.

Vaccine nationalism – call it pragmatic or call it immoral. Either way, it is a reality we will have to get accustomed to. A reality where international co-operation is a luxury, not a given.

About the Author
Avishai is a Policy Fellow of The Pinsker Centre, a campus-based think tank that facilitates discussion on global affairs and free speech. The views in this article are the author’s own.
Comments