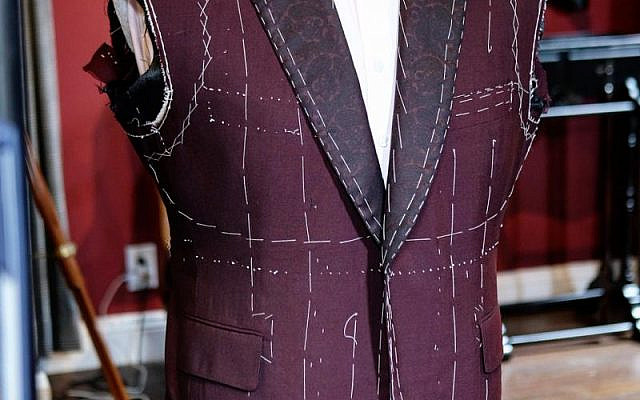 The Malbim and others explain how a bevy of apparent synonyms for “clothing” actually differ from one another. As many commentators note, the Hebrew words levush and malbush do not inherently refer to clothing. Rather, they are conjugations of the Hebrew verb lovesh (“he dresses”), and refer to that with which one dresses. Malbim further explains that the word beged is a general term that includes all sorts of clothing, while other words, in various ways, refer to specific types of clothing.

Returning to the word levush, the commentators explain that it denotes a type of garment which is worn in the normal way of dressing, but is nevertheless special because most people do not wear this type of garment. A levush is a distinct type of clothing reserved for certain individuals. To this effect, the word levush is applied in the construct to form phrases like levush malchut (“royal clothes”), levush sak (“sackcloth) and more.

The word kesut (which literally means “cover”) refers specifically to clothing which is worn by simply covering oneself with it (like a poncho or a shawl). It is not worn in the normal fashion of donning clothes. Sometimes, the first letter of the word kesut is dropped and the word appears as sut (e.g., Genesis 41:11). A type of kesut that is worn at night is known as a salmah or simlah (with the metathesis of language allowing for the placement of the L and M consonants to be interchanged). The Malbim explains that another difference between kesut and salmah/simlah is that the former is only used to cover oneself, while the latter also gives honor to its wearer. Rabbi Shlomo Pappenheim argues that the word kesut focuses on clothes’ ability to protect its wearer (whether from the heat, the cold, or something else).

Rabbi Shlomo Aharon Wertheimer points out that the above stands in contrast with the explanation proffered by Rabbi Yosef Kolon (1420-1480), also known as the Maharik. He wrote that beged denotes a simple piece of cloth like a tallit that is not fitted to the one wearing it, while kesut implies a specially sewn garment that fits to one’s shapes and dimensions. Rabbi Wertheimer further writes that a salmah/simlah is a linen cloth that can be folded and used to cover one’s head, neck, and upper torso (similar to a hijab or kefiyeh), and also doubles as a bed sheet when unfolded to its full size. Rabbi Wertheimer agrees that when worn, a salmah/simlah generally serves as a badge or symbol of honor.

Although he goes against the consensus, Ibn Ezra (to Exodus 22:25) actually writes that salmah and simlah are not synonymous. Rather, he explains, simlah is a general term which includes multiple items, and that salmah is one of those items that falls into the category of simlah.

The word mad (rhymes with tod) refers specifically to a garment which is custom-fitted to the person intended to wear that article. It is related to the Hebrew word moded (“measure”). In Modern Hebrew madim refers to a uniform, most commonly the fatigues worn by soldiers. The word maateh refers to “wrapping” or “enveloping” and need not necessarily refer to clothing, but to anything which is wrapped around something else or otherwise envelops it.

Malbim explains that the word me’il refers to the outermost layer of clothing which one might wear, and is related to the Hebrew word mei’al (“on top”). Rabbi Wertheimer writes that me’il denotes a thin, delicate article of clothing.

The word levush, on the other hand, denotes a pragmatic, utilitarian use of clothing. The Talmud (Shabbat 77b) explains that the word levush is a contraction of the words lo bushah (“no embarrassment”), because the purpose of wearing a levush is simply to cover oneself in a respectable way — there are no dastardly motives. Rabbi Yochanan called his clothes “the honors” (Bava Kama 91b) because he viewed his clothes as simply a mechanism by which he may respectably present himself in public, as opposed to a mask behind which to hide.

Following this sort of model, Rabbi Shlomo of Karlin (1738-1792) explains that every action a person does creates a layer of dressing for his soul, but that there are two types of dressings. If he does a good deed he creates a levush for his soul, and if he does a bad deed he creates a beged over his soul. What you wear depends on what you do. Although the famous cliché suggests that “the clothes make the man,” we see that actually the opposite is true: “The man makes the clothes.”