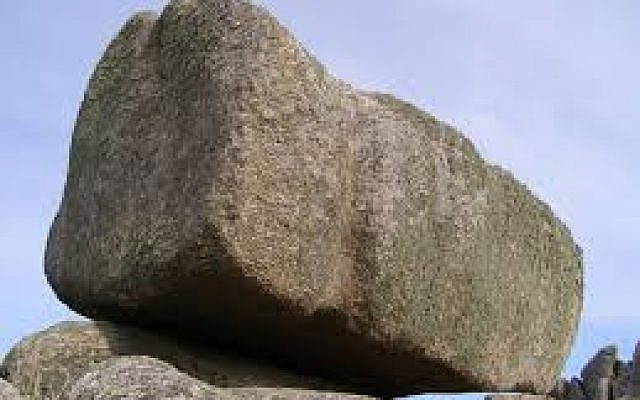 I’m not a geologist, nor do I pretend to be one. But I do think that we can draw some fascinating insights into the Holy Language by studying a bit about rocks. Yaakov Avinu is especially associated with rocks because he slept on rocks when he had his famous dream of the ladder (Gen. 28:11), he used a rock as an altar to pour oil in honor of G-d (Gen. 28:18), and he single-handedly lifted a heavy boulder from on top of a well (Gen. 29:10). He even coined the phrase “The Rock of Israel” (Even Yisrael, pronounced ehven) which first appears in Gen. 49:24. In all of these cases, the word for “rock” which appears in the Bible is even.

The Malbim defines an even as a naturally-occurring stone (while contrasting it with leveinah, a “brick”, that is man-made through mixing mortar), but there are other words in Hebrew which also refer to a rock.

The Mishnah (Zevachim 13:3) teaches that besides slaughtering a sacrifice outside of the Temple, there is a separate prohibition of offering a sacrifice outside of the Temple. According to Rabbi Yosi, this only applies to somebody who erected an altar especially for such use, and offered a sacrifice upon on it. However, Rabbi Shimon disagrees and maintains that even if one offered a sacrifice on an even or a sela (types of rocks) he has violated this prohibition — even though he did not offer the sacrifice on an actual altar. What is the difference between an even and a sela?

Rabbi Shlomo Pappenheim of Breslau (1740-1814) explains that even is an umbrella term which includes sela and other words. It is the most general way of referring to a rock, without being more specific. Rabbi Pappenheim notes that even sometimes appears in the construct form to refer to specific types of rocks: avnei ha’sadeh (rocks of the field), avnei yakar (precious stones), avnei shayish (usually said to be marble stone, but in the Judean Formation, limestone is a more likely candidate). He argues that the root of the word even is the two-letter combination BET-NUN, which refers to the notion of “building”. This is because most rocks are usable for construction, and indeed the most common use of rocks is for the purposes of building. Because rocks are hard, the word even was borrowed to refer to any matter which is in a solid state. For this reason, Joshua 10:11 refers to avnei barad (“rocks of hail”) because even though hail is not actually a rock, it is hard like a rock, although my geologist friend Aaron Kahn tells me that from a scientific point of view, ice is technically considered a rock.

Rabbi Pappenheim explains that rocks are commonly comprised of sand, dirt, and many other mineral deposits, tightly compressed together. Those rocks can easily be broken if shattered by a hammer. However, other rocks are harder, and cannot be as easily broken. Those rocks are typically made up of different minerals glued together with calcium carbonate (calcite), and generally have a whitish complexion. This type of rock is known in Hebrew as a sela. In order to smash a sela, one must apply intense pressure, so that when the stone is finally smashed its pieces will fly outwards and disperse (see Jer. 23:29).

In most instances in which the Bible speaks of a sela, it refers to a hard rock which protrudes from the ground, or even a rocky mountain. Because a sela is quite hard and cannot be easily chipped, it became accepted as the recognized standard in determining weights and currencies. Therefore, in the time of the Mishna a sela was the name of a specific currency. (Rabbi Yaakov Tzvi Mecklenburg (1785-1865), in HaKsav VeHaKabbalah, on Ex. 4:25, Deut. 9:9 cites Rabbi Pappenheim’s explanation, and adds to it a layer of exegetical interpretation related to the Stone Tablets of the Ten Commandments.)

Rabbi Aharon Marcus (1843-1916) makes a fascinating suggestion. He proposes that in all Hebrew words whose essential root is the two letter combination SAMECH-LAMMED, the SAMECH is actually a placeholder for the letter AYIN which follows in the aleph-bet. In other words, he says that when a word’s root seems to be SAMECH-LAMMED, it should really be understood as AYIN-LAMMED. The letters AYIN-LAMMED refer to something “on top” (al/l’malah) of something else, and to something which is “raised” or “ascends upward” (oleh/aliyah). To that effect, he suggests that the word sela should be understood using this paradigm, and that it too refers to something which “comes up” — in this case, the type of rock which “comes up” from underground.

Both Rabbi Shlomo Pappenheim and the Malbim write that a tzur is a harder rock than a sela. We will explore exactly what type of rocks are considered a tzur, and in doing so will accrue a greater appreciation of why G-d is sometimes referred to as a Tzur (for example, Tzur Yisrael, “The Rock of Israel”).

As Rabbi Pappenheim explains, the hardest types of rocks are called tzur. The word tzur is related to tzarur (“cluster” or “bundle”) because its components are so tightly packed together that the resulting stone is quite hard. Rabbi Pappenheim explains that one type of tzur is called Hornstein (German for “horn stone”), or chert. Pieces of chert generally have very sharp edges, so they can be used for cutting in lieu of metal knives. In fact, Rabbi Yosef Kimchi (1105-1170), the father of the Radak (Rabbi David Kimchi, 1160-1235), writes in Sefer Ha’Galui that tzor/tzur specifically refers to a sharp rock. When Moshe’s wife Zipporah took a stone to circumcise her son, the Bible uses the word tzur to describe that stone (Ex. 4:25). Similarly, when the Jews in Joshua’s time performed mass-circumcision (Josh. 5:2-3), their instrument of choice was described as charvot tzurim (literally, “stone swords”).

The word chalamish is commonly translated as “flint”, which is a glassy rock formed from silicate fossils. Like the tzur, flint stones are generally sharp because when they break, they form conchoidal fractures which always have sharp edges. Both chert and flint have historically been popular stones for making arrowheads. Interestingly, in Modern Hebrew the word tzur refers specifically to the “flint” stone.

Nonetheless, Rabbi Pappenheim argues for a different way of identifying chalamish. He explains that chalamish does not refer specifically to “flint”, but is rather a sub-category of tzur which refers to the hardest types of rocks within that category. To this effect, chalamish even includes diamonds (called yahalom in Modern Hebrew, after one of the precious gems mentioned in Ex. 39:11), which are generally considered the hardest natural mineral. By a small stretch of the imagination, Rabbi Pappenheim links the word chalamish to chelmon (“egg yolk”), explaining that both are round and smooth. The word chalamish sometimes appears attached to tzur as part of a construct phrase, such as tzur hachalamish or chalamish tzur (Deut. 8:15, 32:13); while other times it appears in the absolute as simply chalamish (Ps. 114:8, Job 28:9, Isa. 50:7).

In order to better appreciate the nuances that we are highlighting, I refer the reader to Moh’s Scale of Mineral Hardness. That scale rates minerals based on their hardness, with talc — the softest of minerals — rated at 1. In Moh’s scale, calcite-based rocks (what we defined as sela in last week’s essay) are rated at 3, while chert (a type of tzur) — which is much harder — is rated at 7. Diamonds, of course, take the cake at the hardness rating, at 10. If the conventional identification of chalamish as flint is accurate, then chalamish should be rated at 7. However, as Rabbi Pappenheim puts it, chalamish can reach up to a 10, because it includes such hard minerals as diamonds.

Rabbi Chaim Friedlander (1923-1986) explains that a tzur refers to the bedrock upon which the foundation of a building rests. As any engineer knows, if the foundation is sturdy, the edifice has on what to stand. G-d is also called a tzur because He is likened to the sturdiest foundation. The implications of this empowering idea is that at all times we can rely on G-d to help us out, just as a building must constantly rely on its foundation in order to remain standing.

Maimonides in his famous Guide for the Perplexed (1:16) explains that the word tzur refers to a mountain and to a type of hard rock. He further writes that tzur also refers to the quarry from where rocks are hewn. To bolster this assertion he adduces the prophecy of Isaiah, who implores the Jewish People to look back at their history: “Look to the rock (tzur) from which you were hewn… look to Abraham, your forefather and to Sarah, who bore you…” (Isa. 51:1-2). In this context the word tzur refers to the genealogical root of the Jewish People. From that usage, explains Maimonides, the word tzur was borrowed to mean any type of “root” or “source”. It is in this spirit that G-d Himself is referred to as a tzur (see Deut. 32:4, 32:18, 32:30, I Sam. 2:2, Isa. 26:4) — for He is the Ultimate Source of everything. Based on Maimonides’ explanation, Rabbi Moshe Teitelbaum (1759-1841) explains that a tzur is the source of stones, while even or sela are the stones themselves.

Similarly, Rabbi Pappenheim explains that G-d is called a tzur because, as the Prime Force behind all of Creation, He “ties” (tzorer) together all aspects of creation under one common thread: everything requires Him in order to exist. As Hannah (the mother of Samuel the Prophet) famously exclaimed: “There is no Rock (tzur) like our G-d!” (I Sam. 2:2). The Talmud (Berachot 10a) expounds on this passage by taking the word tzur, and interpreting it as tzayir (“Fashioner” or “Creator”) — further cementing the connection between G-d’s rock-epithet and His role in Creation. The Rock is not only the peoples’ champion, but the champion of all of creation. Can you dig that?