Happy Hanukkah.  For some strange reason I was not able to use my account for two weeks.  Here is the davar Torah prepared for last week. 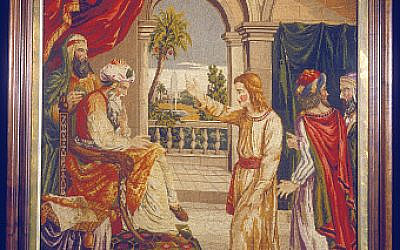 Joseph Interpreting the Dream of King Pharaoh by Eliza Gleason

This parasha is rich in narrative material.  Joseph at about age 17 and his father’s favorite child was hated by his brothers because of Ya’akov favoritism. Instead of trying to make peace, Joseph reports on his dream.  He dreamt that the brothers were binding sheaves and the brothers’ sheaves bowed down to Joseph’s sheaves.  This is not the kind of dream one should report to brothers who already hate you. Take a few steps back from the story to see a larger picture.  What are the lessons to be learned from sefer Bereishit?  The name of the book in Hebrew and English means a book of beginnings. The creation of the world leads to the beginning of the Jewish people. The world was created with mankind given the task to master the world and keep it going. Would a struggle against natural events or foreigners make a more powerful story? Order was created out of chaos to enable people to live together, yet there are no laws of civilization given until the time of the Torah. If you were writing the story of your people, wouldn’t you want the readers to think every struggle or difficulty in the story was part of the saga to make the people one?

Yet we have human frailty – brothers who hate each other; brothers who are afraid of each other. We have siblings who not only hate each other but are willing to cause physical harm or kill their own brother.  How is the reader supposed to conclude that we are one people to trace our roots to the twelve sons of Ya’akov?

This parasha is read just before Hanukkah or on Shabbat Hanukkah. The struggle of the Maccabees was not just against foreigners. The Hellenistic Jews who abandoned the Law and the Jewish community were also the enemies.  This was partly a civil war. Hanukkah is a holiday to celebrate rededication.  It was time to reconnect to the Jewish heritage. Hanukkah has a celebratory, almost happy ending.  This week’s parasha leaves us wondering. Joseph interpreted the dreams of the baker and the butler who were imprisoned with him; however, the chief butler forgot him. We will have to wait until next week to read how Joseph starts on the road to leadership and success.

It would make a great business lesson for the sons of Ya’akov to work together and create a powerful economic empire. We could learn how partnerships and cooperation builds a great family team.  If the story was about children who learned the lessons of Godliness, leadership and humanity from their father and grandparents, we could say this is a model for the organization.  This is not the story.

Dreams are great when used for setting goals and planning.  They are terrible if used for bragging or creating unrealistic options.  When Joseph interpreted the dreams of  baker, butler and baker he was delivering God’s message.  When he told his brothers his dreams he was bragging and not exercising mature judgement.  Dream on, but be careful what thought your share.