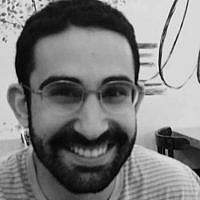 The Blogs
Benjamin Perlstein
Apply for a Blog
Advertisement
Please note that the posts on The Blogs are contributed by third parties. The opinions, facts and any media content in them are presented solely by the authors, and neither The Times of Israel nor its partners assume any responsibility for them. Please contact us in case of abuse. In case of abuse,
Report this post.

It is one of the Torah’s great moments of revelation: just after being thrown out of his parents’ household, cast into exile to escape his brother’s revenge for stealing their father’s primary blessing, Jacob stops for the night, places a stone under his head, falls asleep, and has a dream. From Jacob and his son Joseph, to Martin Luther King and John Lennon, dreamers have always featured prominently in the space between creativity and morality, and so our discussion has much to gain from this significant account of dreaming in the Hebrew Bible.

In his dream Jacob sees a ladder planted on the ground leading up to the heavens, with angels moving up and down on it—rising and falling, coming and going. While Jacob is dreaming, just as the heavenly stairway is set on the ground, so God is stationed beside Jacob, and officially issues him the blessing that has been passed from his grandfather to his father and now to him.

The text suggests that this vision jolts Jacob from his sleep. He wakes up rattled by his dream. But what he feels is not the residual terror from a nightmare or the accompanying rush of relief in returning to consciousness. Rather, he is consumed by loving fear of God—an unparalleled, life-changing sense of awe. “Surely God is present in this place,” he exclaims to no one in particular, “and I did not know it” (Gen. 28:16).

As readers we can appreciate why Jacob would be shocked. In one night of dreaming, he receives God’s blessing, experiences his first genuine prophetic vision, and attains the spiritual maturity to fully appreciate the divine presence in the world. Yet when we consider the context in which this event takes place for Jacob, we may be surprised that he is shaken in such a positive way upon waking from his dream.

At the time of this dream, Jacob is in the throes of the great trauma of his formative years. He has just been forced into exile, partially to ensure his safety, but also as a form of punishment. It is fair to assume that Jacob is feeling all kinds of pain—in way over his head, clobbered by the grave consequences of his actions and the dysfunctionality of his family. And so, despite the power of his vivid spiritual experience, we might more readily expect him to feel rather crushed to be back in the real world—forced to reckon with the fact that his hardship is hardly an illusion.

Yet Jacob does not wake from his beautiful and divinely inspired dream feeling distressed and overwhelmed by the return of his harsh, lonely existence. Being plunged back into reality from such an awesome vision does not reopen his wounds, but rather reinvigorates him with a deep and uplifting sense of purpose. He sees that he has been taking too much of his life and situation for granted—not recognizing God’s presence—and is drawn into the glow of a radical new perspective. Far from being depressed, he rises early the next morning to consecrate the place and formally affirm the relationship with God that will stay with him from then on. At a moment when many of us would be more likely to feel lost, scared and bereft of hope, Jacob finds not only comfort, but energy, inspiration and faith. His growing pains give way to real positive growth.

What are we meant to take away from this episode? What does it mean that of all life events it is a dream that becomes a watershed moment in Jacob’s coming of age process? Aren’t dreams more associated with childhood than adulthood? Through the account of Jacob’s dream, Parshat Vayetzei appears to advance a message about growing up that is of singular importance in the Torah. It is a commentary on how adults navigate the space between dreams and reality.

From Jacob’s vision and revelation to his response upon waking, there is a deep sense of unity, rather than contrast, between dreams and reality in our parsha. Heaven and earth—and man and God—are joined together in Jacob’s vision. The intensity of the dream does not begin fading from memory as soon as it wakes him, but rather overflows into his reality. Indeed, it becomes one of the defining moments of the rest of Jacob’s life, and one of the only memories that he recounts just before he dies (Gen. 48:3). Perhaps for the first time in his life, rather than feeling the distinction between the ethereal world and the actual one, Jacob grasps a sense of integration between the two. This is a significant step, especially for Jacob who seems to have spent his whole childhood indoors, thinking and daydreaming—at odds with his more active and enterprising twin brother.

This core insight of our parsha—that dreams and reality may, and perhaps must, go hand in hand—might on some level seem terrifically idealistic and impracticable. But this idea is not about mindless belief in the supernatural or reckless abandonment of practicality. The image of interconnection between heaven and earth that we see in Jacob’s dream, and his subsequent recognition that his dream has extraordinary implications for his real life, represent the utterly serious notion that we cannot afford to isolate idealism from realism—that they must inform rather than oppose each other. Life and the world are certainly full of reminders of the distance between the way things are and they way we imagine they can and should be. But Jacob’s example stands against the cynicism that reality often tempts us—especially as adults—to adopt.

The strength of this rejection of cynicism comes, of course, from the fact that it emerges at a time when it would be very easy for us to imagine Jacob going in the opposite direction—embittered by the anguish of familial alienation and failure. It is all too common to associate maturity and adulthood with growing out of hopes, dreams, imagination, and even pure conviction. Ideals may be dulled and tempered by experience, and—as we are often told—that’s just the way it is. Yet while it may be true that when the rubber hits the road, principles and plans must be subject to pragmatic compromise and moderation, Jacob’s refusal to choose between dreams and reality cannot be so easily dismissed.

In our parsha Jacob demonstrates how adulthood may be marked by inflection points of inspiration as much as by moments of reckoning with life’s sobering and even traumatic difficulties. Although most accounts put Jacob deep into middle age at this point in the narrative, his perspective may appear to be typical for a young adult—navigating between life stages and between dreams and reality. In any case, insofar as Judaism is fundamentally a religion for adults, we may all stand to learn from the suggestion of Jacob’s example: among the many images and illusions that work their way into our lives, the cynical assumptions that are often so prevalent among adults may be more misguided than the hopes and dreams that they lead us to abandon. And such dreams, like God’s presence itself, may be more real than we could ever imagine or fully appreciate in youth.

This idea leads us directly to how the fusion between dreams and reality in Jacob’s experience applies to the relationship between creativity and morality. On a very basic level all creative and moral acts must necessarily navigate between dreams and reality. Indeed, it is one of the most fundamental links between creativity and morality that both force us to consider the difference between the ideal and the real. In matters of creativity and morality, the core challenge is how to translate theory into practice. The creator must ultimately come to terms with what it means to bring the products of a vision into the world, just as the moral agent must face the confounding challenges that often emerge when values enter the arena of actual life situations. When moments of truth arrive, calling for ideas to be applied in real time, creativity and morality look strikingly similar—both warranting an aspirational yet grounded sense of what is possible.

The saga of Jacob’s coming of age represents a striking suggestion about the need to maintain this delicate balance between idealism and realism in adult life. A world in which dreams are simply abandoned in the face of reality is necessarily a world without creativity and morality, because, frankly, life is hard. The harmony between dreams and reality in our parsha challenges us to ask, if dreams are just for childhood—not meant to withstand the pressures of adulthood—then what is reality really worth? The considerable difficulty of ultimately bringing vision and values to fruition does not excuse us from trying. As far as Jacob’s example is concerned, cynicism must be understood as an abdication of moral and creative responsibility. No matter how young or old we take Jacob to be in our parsha, the Torah is full of adults who deal with complex interplays between idealism and realism. And at every turn the strongest and most powerful models are those who, like Jacob, end up striving both to dream without being naïve and to live fully without losing hope.

This message brings us back to the actual content of Jacob’s dream. The angels going up and down the stairway to heaven serve as a symbol of the perseverance and grit that is involved in sensibly tying dreams to reality. Inspiration comes and goes like the angels, but we must stay engaged, step-by-step, in our creative and moral projects—just as God stays beside Jacob in his most difficult times. The faith that underpins this message is not about comfort or complacency in belief, but rather about sustained commitment and disciplined trust in visions and values. In Jacob’s example the Torah charges us not to be fair-weather friends to the most important creative and moral dimensions of our lives. And success in that undertaking requires a mature, but never jaded, perspective on the relationship between dreams and reality.

About the Author
Benjamin Perlstein is a political and strategic communications consultant living in Tel Aviv. He is an alumnus of the Yeshiva Summer Fellowship at Mechon Hadar in New York City, and holds a BA in Political Science from Tufts University.
Related Topics
Related Posts
Comments