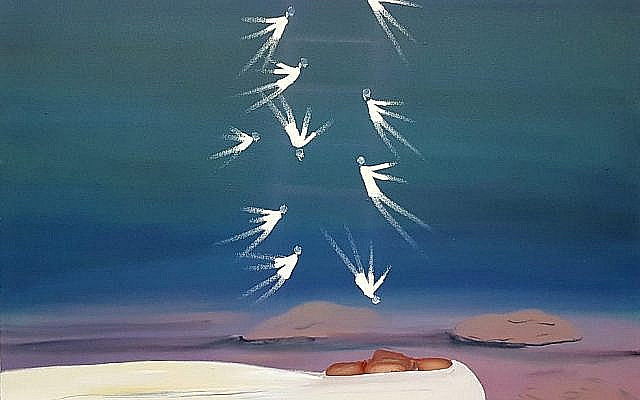 The Dream of Jacob,' by Shai Azoulay.

The famous commentary of the Beit Halevi, Rabbi Joseph Ber Soloveitchik from Brisk, addressing this verse is well known. Why does the Torah need to tell us Jacob left Be’er Sheva if we are told he is headed to Charan? Why the redundant wording?

Rabbi Soloveitchik famously explains that sometimes we leave a place just for the sake of leaving. It may be us fleeing danger, as in the case of Jacob fleeing Esau, or it can be us wanting to avoid a place for other reasons. Conversely, when we go someplace, we might be headed there for no reason other than arriving there. Things may have been good where we came from, but we would love to be at our new destination. Jacob, in his righteousness, had both in mind. True, he was fleeing the wrath of his brother Esau, but he also had so much that he wanted to accomplish in Charan.

When the righteous do things, they find meaning both in where they are living and in where they are heading. And so, on his way out, Jacob not only merited from the benefits of leaving but also where he was heading to. Jacob famously has his dream with angels coming up and down the ladder to heaven.

My grandfather, Rabbi Baruch Poupko, once shared the following story:

“A famed chassidic rabbi, known for his rare diligence in studying Torah, was dancing with his chassidim on a festive occasion. One of the Rabbi’s closest disciples approached him afterward and asked, “Rabbi, we know how you conserve every possible moment of your time and strength for the study of Torah. Why were you dancing with such zest, with complete disregard of your health and of the time which could have been used to attain a more profound comprehension of a page of Gemora?” Smilingly the Rabbi replied, “While one dances, one achieves a detachment and separation from the earth. It is worthwhile to invest time and energy to come closer to heaven even by the few inches which dancing elevates you from the ground.”

Jacob was a man of always going, always striving for that one inch closer to God.

At the very end of the Parsha, as Lavan and Jacob part ways for eternity, we are told: “Jacob went on his way, and Lavan returned to his place .”The great Rabbi Meir Simcha of Dvinsk, in his book Meshech Chochma, explains this to not only be a matter-of-fact statement but also a profound statement of meaning.

Jacob went on his way; he had a journey, a purpose, dreams, goals, and aspirations. Lavan–and others who seek conflict with the Jewish people–have no lofty goal to aspire towards. The moment their quarrel with the Jewish people is over, they recede back to their same stagnant place. “Lavan returned to his place.”

The story of Jacob and the righteous is one of constant striving, of never being satisfied in the same place; this is who they are.

Parshat Vayeshev, telling the tragic story of Joseph being sold into slavery by his very own brothers, begins with the word “vayeshev Yaakov,” and Jacob sat, or settled. The rabbis note this word being unusual for Jaboc and famously say” “Bikesh Yaakov Leshev Beshalva” Jacob sought to settle down and find peace and was immediately struck by the pain of the Joseph affair. God said: “is it not enough for the righteous that they have so much waiting for them in the world to come that they seek to sit in peace in this world?!”

The rabbis understood that Jacob, with all of his righteousness and good deeds, beginning to settle down, was a deviation from his essence and who he was meant to be. Constantly growing, seeking, challenging ourselves, and looking for the next level is so much a part of who the righteous are that they must pursue this path for as long as they can.

“If you restrain your foot because of the Sabbath, from performing your affairs on My holy day, and you call the Sabbath a delight, the holy of the Lord honored, and you honor it by not doing your wonted ways, by not pursuing your affairs and speaking words. Then, you shall delight with the Lord, and I will cause you to ride on the high places of the land, and I will give you to eat the heritage of Jacob, your father, for the mouth of the Lord has spoken.” (Isaiah 58)