When Ilya Zunis was ten years old, Nazi Germany invaded his homeland, the Soviet Union. For four years, battles and starvation devastated eastern Europe, leaving ruins in their wake. Finally, on May 8th, 1945, Nazi Germany capitulated to the Allies. This Sunday, Ilya celebrated the seventieth anniversary of that victory in Jerusalem. WW2 survivors and veterans from all over Israel marched in the center of town wearing their medals. Younger men and women walked with them, carrying pictures of their parents and grandparents who fought in the war. School children and passers-by waved Israeli flags and gave out red carnations. 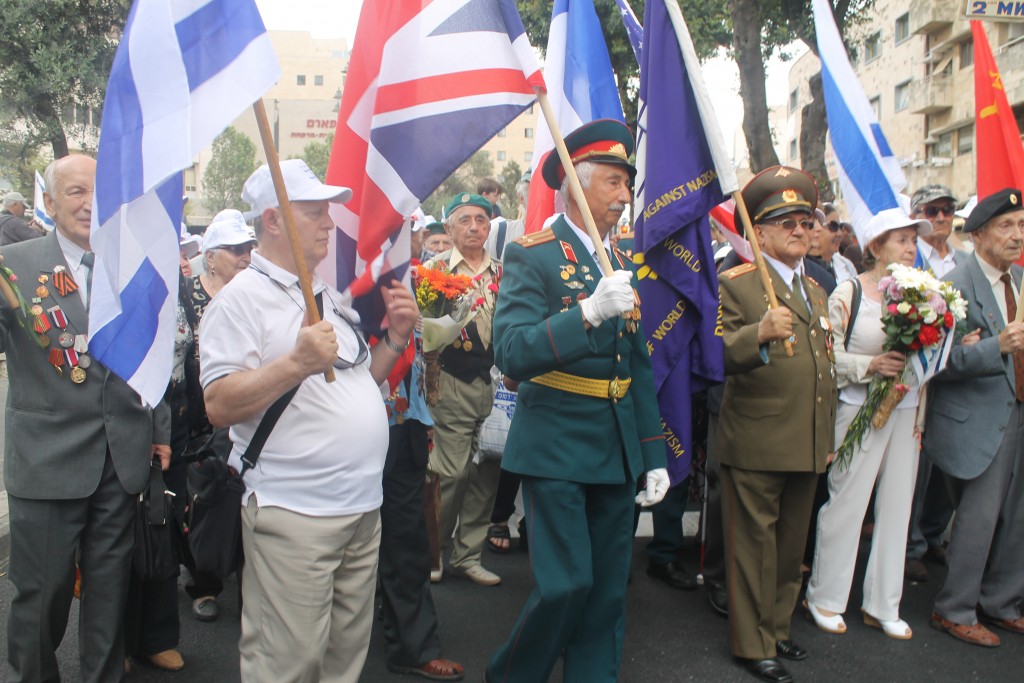 Ilya brought with him a hand-crafted poster that commemorates his family’s involvement and sacrifices in the war. Seventeen members of his family joined the Red Army, and eleven of them were killed in action. Other relatives lost children and parents to the German air raids in Odessa. Ilya himself was evacuated deeper into the Soviet Union and worked in the war industry, producing metal for military airplanes. Ilya’s poster tells a story that every eastern European family can identify with: the war turned everyone’s life upside down. 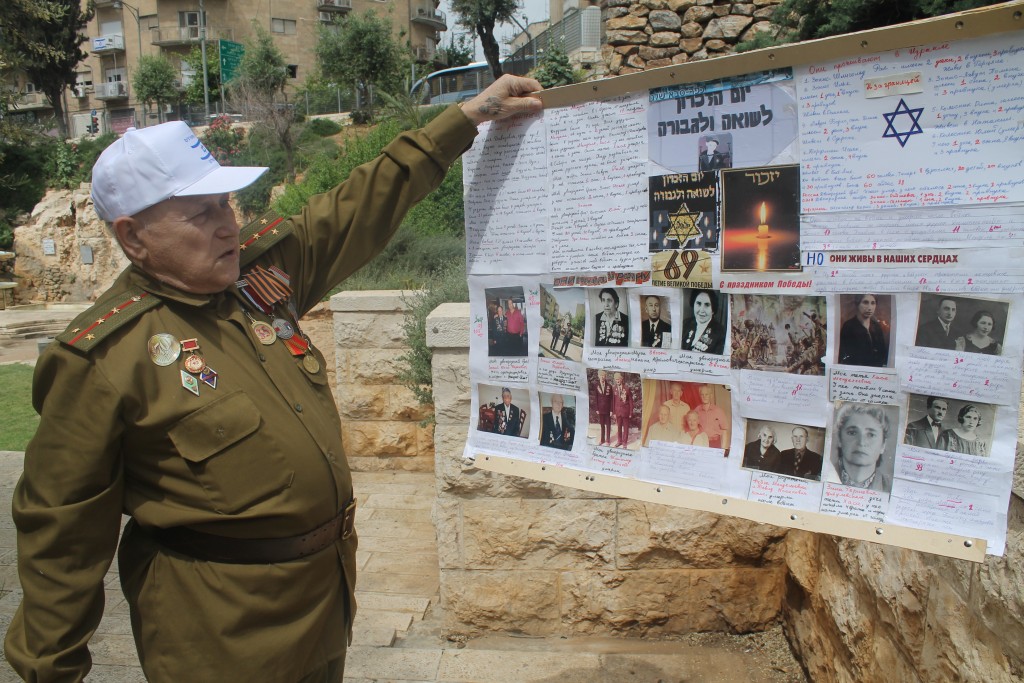 Ilya Zunis and his poster

Memories of sacrifices and glory drew hundreds of people to the parade. Yafim, who was a child during the war, came all the way from Kfar Saba to honor his ancestors. “Our parents sacrificed so much for this day,” he explained, “and this is why it’s so precious for us.” Yelena brought her teenage son David to the parade for similar reasons. David’s great-grandfather fought as a partisan in Belarus, and Yelena wished to honor his memory and teach her son about their heritage. “The veterans were great people,” David said, “who helped the whole world to be rid of the Nazis. We wouldn’t have made it if it wasn’t for them.” Yael and Shirel, school girls from Jerusalem, came with their whole class because, as Yael put it, “We are here because of those who fought then.” 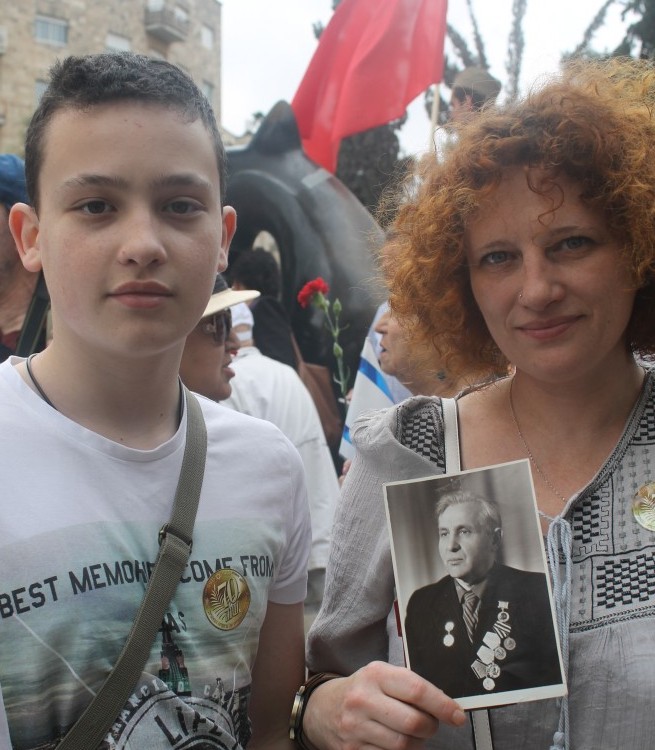 Yelena Brudneer with her son, David, and her grandfather’s picture

Ilya thinks that we owe the veterans more than “just” our national survival. “If it wasn’t for this day,” he stated, “there wouldn’t have been a state of Israel.” After the parade, many distinguished speakers expressed a similar sense of indebtedness. “You made the deciding contribution to the fact that we now live in our own independent state,” proclaimed MK Isaac Herzog, leader of the Israeli opposition. “You released humanity from the yoke of the worst enemy in history.” Addressing the veterans, MK Sofa Landver, the outgoing minister of immigrant absorption said,  “If it wasn’t for you, we wouldn’t have had the State of Israel, our own little homeland, our own country.”

I was moved by the speeches. But I couldn’t help but notice that they were anomalous. On any other day, one would be hard pressed to hear a MK attributing so much significance to the Allied victory in WW2. The narrative we usually tell ourselves about Israel’s birth focuses on the Zionist movement, the great waves of Aliyah since 1882, and the Holocaust. In fact, growing up in Israel, it’s easy to forget that there was more to WW2 than the Final Solution. We learn about the Jews who retained their quiet dignity even in the death camps. We hear about the heroism of the Warsaw Ghetto Uprising and the Jewish partisans. But we barely pay attention to the enormous sacrifices of the Allies. We barely acknowledge our debt, as Jews, to the millions of soldiers who secured our national survival with their blood. And we forget that, just as Ilya said, their victory made the State of Israel possible. 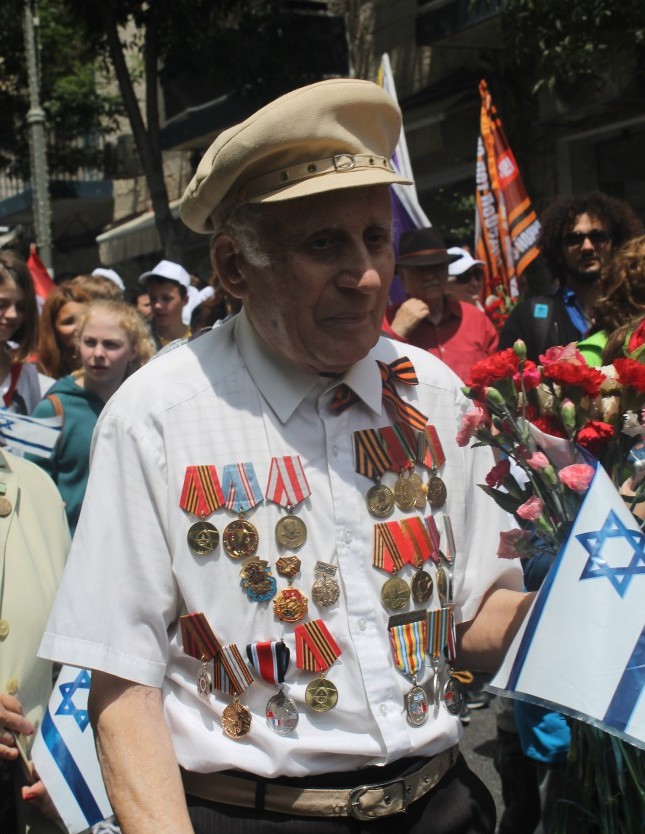 Surrounded by Israeli flags and red carnetias, a Soviet V-Day symbol, the veterans demonstrated both their particular WW2 heritage and their conviction that it is part of Israels story

When the Iron Curtain fell, over a million Russian-speaking Jews immigrated to Israel. They brought with them their memories of WW2 and the sacrifices of the veterans. But when they first sought official recognition for their heritage, many leading Israeli politicians rejected their requests. The consensus was that the heroism of the veterans, though commendable, had no place in the official Zionist narrative. The veterans didn’t fight as Jews or Israelis but rather as Russian, British, and American citizens. Therefore, their heroism has no place in Israel’s national memory.

But does our national memory have to be that narrow? Nations choose their heroes with care. They exalt people who represent desired values and inspire desired actions. Early Zionism rejected the heritage of the diaspora and scorned Jews who did not act in accordance with their concept of Jewish nationhood. WW2 veterans had no place in their pantheon of heroes. But we can go beyond their narrow vision and learn from the WW2 veterans. As we face challenges today, the veterans’s exemplary willingness to fight evil despite the risks can augment our own courage. Their victory, so dearly bought, can offer us hope. As Meir Turgeman, Deputy Mayor of Jerusalem, said at the end of the parade: “Your courage inspires our soldiers and youth. They are here today to acknowledge you, bless you, and thank you.”

As if to illustrate Turgeman’s point, one of the Israeli soldiers present marched hand in hand with his Veteran grandfather. Claude Karubi fought in the British army. His grandson Menachem has the privilege to serve in the army of the independent Jewish state. He wouldn’t have had this privilege if people like his grandfather hadn’t fought against the Nazis. Both Clause and Menachem, I think, felt honored by their connection to each other. 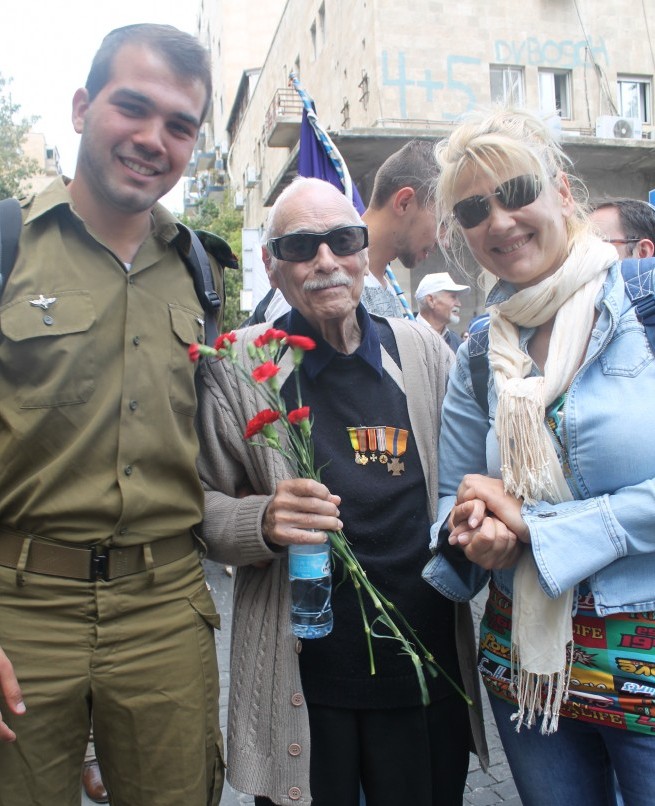 WW2 veteran Claude Karubi with his grandson Menachem, a combat soldier in the IDF

The massive Russian-speaking Aliyah forced the State of Israel to recognize its WW2 heritage to some degree. Besides the annual parade in Jerusalem, many cities hold various Victory Day ceremonies and honor local veterans. According to a recent poll conducted by the Dialog Institute, almost half of Israelis support making Victory Day an official Israeli National Holiday. But if we truly want to expand our national memory and acknowledge our debt to the veterans, we must contend with yet another obstacle.

Victory day may represent important universal values, but the way it is celebrated in Israel appeals almost exclusively to Russian-speaking Jews. The parade itself is a direct imitation of Soviet ritualism. The speeches at its end were mostly in Russian, and the speakers often referred to the native Israelis present as “guests”. The songs that moved the veterans to tears were the Russian songs of their youth. And the symbols that mean the world to them, like the hammer and sickle flag, alienate native Israelis. 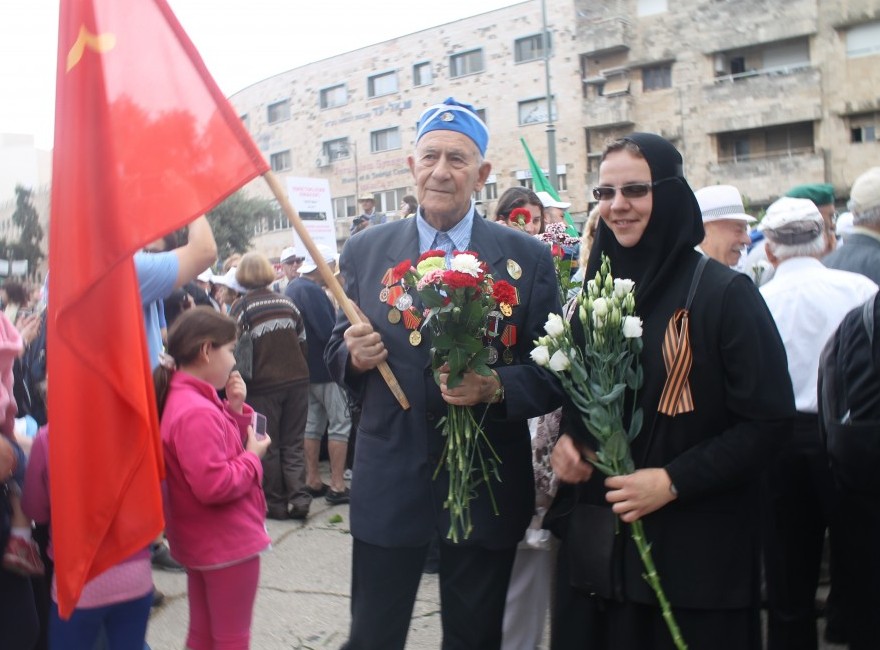 A veteran carrying the hammer and sickle flag, standing by a nun from the Russian Orthodox Church

Ilya admitted sadly that his Hebrew-speaking grandsons don’t understand his stories. Yael, who came to the parade with Russian speaking classmates, lamented the scarcity of native Israelis in the parade. But can we really blame non-Russian speakers for feeling like this day and its ceremonies have nothing to do with them?

If we wish to integrate Victory day into our national memory, we will have to adapt it to the sensibilities of the wider population. Otherwise, our WW2 heritage will most likely remain a “Russian-only” affair, and may well become a forgotten relic of the past. But if we change the parade too much, we will deprive the very veterans we wish to honor of the symbols that they care for. How can we expand our national memory without hurting the heroes whom we wish to extol?

Perhaps the key to expanding our national memory doesn’t lie in public ceremonies, but rather in our schools. If we will emphasize our debt to the Allies in history lessons, if teachers will extol the heroism of WW2 veterans, the particular Soviet ritualism of the Victory Day parade wouldn’t really matter. The Parade will offer us a way to honor the veterans in the way they prefer, but we wouldn’t have to rely on it to inspire our children. If Ilya’s grandsons will learn about him in school, they may come to recognize him as the role model he is. Then, the Soviet form of the Victory Day Parade wouldn’t deprive us of our WW2 heritage. It wouldn’t stand in our way as we expand our national memory.