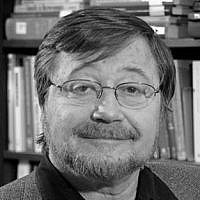 The Blogs
Judea Pearl
Apply for a Blog
Please note that the posts on The Blogs are contributed by third parties. The opinions, facts and any media content in them are presented solely by the authors, and neither The Times of Israel nor its partners assume any responsibility for them. Please contact us in case of abuse. In case of abuse,
Report this post.

The U.N. vote of Nov. 29 in favor of Palestinian statehood cannot be dismissed lightly; it signals a new era in the moral standing of Israel. Regardless of the outcomes of the vote, Israel, the US and Canada are now perceived to be on the wrong side of justice, and wrong side of history – a moral minority of nine against 138. And it does not matter that some of the 138 states are gruesome dictatorships and others are victims of deceitful propaganda; much of what we mean by “justice” entails the capacity to elicit consensus on what “justice” is, and the general perception today, even among many Americans, depicts Palestinians as seekers of human rights, freedom and dignity, and those who rejected their bid as operating out of pragmatic, but morally unconvincing considerations.

Being in a moral minority is an ugly experience, totally foreign to the Jewish psyche since Nov. 29, 1947. And while it might not directly affect Israel’s security, it will surely affect Jewish students on U.S. and European campuses, whose intimidators will soon be emboldened with a new license to attack. It will also invigorate the boycott movement, the first nibble of which was felt last week by Stevie Wonder, who was pressured to cancel a concert on behalf of the Friends of the IDF in Los Angeles. And it will soon affect the whole structure of Israel advocacy; if until now truth had to be explained, from now on truth will need to be unearthed from beneath many more layers of lies and accusations.

Worse yet, it is very dangerous for Israel to have many Americans believe (and they do) that Israel forced them into a moral minority position, standing isolated from the rest of world. Americans, too, resent being in the minority.

Israel’s greatest blunder in the process leading to the U.N. vote was to keep the moral issue out of the debate. We discussed whether the bid would help or weaken Abbas; whether it violates the Oslo agreement; will it helps Hamas or weaken it; whether it would advance peace negotiations or stall them; whether Abbas would appeal to the international court of justice in The Hague or not; whether it would make Israel more flexible or less flexible; which Israeli party would benefit from it, and which would lose. We discussed every issue on earth except the one that matters in the moral arena: Are Palestinians entitled to, and ready for statehood?

Abbas and his supporters were the ones who pressed this issue aggressively in the court of world opinion, while their opponents avoided it, including American and Israeli spoke-persons and diplomats. And Abbas won, because people are moved by right and wrong, not by calculations of consequences.

Ironically, there was no reason for us to avoid the moral aspect of the issue, as this aspect has been and remains Israel’s strongest point in the debate. It can be summarized in one sentence: “A nation deserves a state to the extent that its children are taught that their neighbors deserve one too. In other words, no society, however in need, is entitled to what it denies to others.”

This argument casts Israel’s objection to Palestinian statehood in a universally compelling vernacular of ethics and morality, and it invokes documented evidence from the realities of the West Bank and Gaza. Specifically, it highlights the fact that the world is still awaiting some sign, however feeble, that Palestinians are ready to accept Israel as a permanent fixture in the Middle East, rather than use their sovereignty to prepare for renewed hostilities from a position of strength. Or for continued gnawing at Israel’s legitimacy from a diplomatic platform of greater clout.

Fortunately, however, the damage to Israel’s posture is not irreparable; it can be reversed by bringing Abbas’s intentions to the surface, and making them central to the conversation through bold diplomatic moves.

For example, what Netanyahu could do is the following: Stop all settlement construction with no exception, and issue an ultimatum to Abbas: Construction will resume in three months unless we agree to meet face to face to discuss conditions for a total “end of conflict,” based on 1967 lines (with adjustments) and the principle of “two states for two peoples”.

Now, before readers criticize my proposal as caving in to Abbas’s demands or as a play on words, let us note that, based on all evidence from the Palestinian side, the chances that Abbas could accept such an offer from Netanyahu are extremely slim. The reason is simple: No Arab leader can utter the words “end of conflict” or “two states for two peoples,” no matter what. The former expresses acceptance of Israel as a legitimate and permanent state, which goes against everything Abbas was telling his people (in Arabic) and against everything Palestinians were brought up to believe. The last time the “end of conflict” theme came up in public was in the summer of 2000, as part of the offer that Ehud Barak made to Arafat during the Camp David Summit. The result was the outbreak of the second Intifada; Arafat could not go back to his people and tell them that everything they were promised (in Arabic) was a fantasy and, as a price for Palestinian sovereignty, Haifa, Jaffa and Afula would remain in Israel’s hands for eternity.

The same goes for the phrase “two states for two peoples.” The Palestinian mantra, even among the most moderate, has always been a “two-state solution,” never “for two peoples.” Admitting that Jews are a “people,” not merely a religion, would bestow legitimacy on the Zionist claim for a national homeland, and thus render the Arab rejectionist movement irrational, if not immoral.

In conclusion, Netanyahu will not be risking a thing by demanding a “total end to the conflict” and “two states for two peoples.” Abbas will reject the offer out of hand. At the same time, these preconditions are so morally compelling that even European politicians would not be able to brand them “unreasonable.” Abbas’s rejection will then restore to Israel the high moral grounds it has held since Nov. 29, 1947.

In the remote case that Abbas should accept the offer, the benefit would be mutual; Palestinian school children will hear, for the first time, that an “end to the conflict” does not mean the eventual annihilation of Israel, but an acceptance of Israel as a permanent and legitimate state — a monumental achievement for both sides, and a necessary first step towards any form of a lasting agreement.

About the Author
Judea Pearl is a professor of computer science at UCLA and president of the Daniel Pearl Foundation, named after his son, the slain Wall Street Journal reporter. The Foundation was formed to "continue Daniel's life-work of dialogue and understanding and to address the root causes of his tragedy." Judea Pearl is co-editor with his wife Ruth Pearl of “I Am Jewish: Personal Reflections Inspired by the Last Words of Daniel Pearl” (Jewish Lights, 2004), winner of the National Jewish Book Award. Judea Pearl was born in Tel Aviv and is a graduate of the Technion - Israel Institute of Technology.
Comments