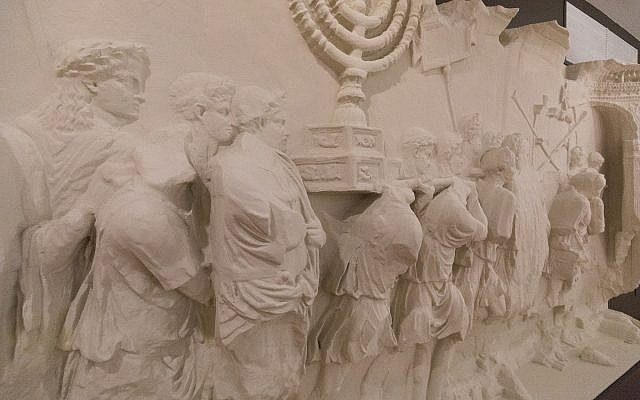 I had the good fortune of spending Chol Hamoed and the last days of Pesach in Venice, Italy. On Wednesday of Chol Hamoed, my wife and I decided to tour Rome for a day. Our first stop in Rome was the Jewish ghetto where we saw the Great Synagogue of Rome that was built after the ghetto walls fell in 1870, and we also visited the Jewish museum there. We then traveled to some of the ancient Roman sites, like the impressive Colosseum and the Roman Forum. At the Roman Forum, we saw the Arch of Titus which was erected by Domitian in 81 CE and commemorates the victories of his father Vespasian and his brother Titus in the war against the Jews that led to the destruction and burning of the Second Beit Hamikdash.

When a Jew visits the Arch of Titus, what most catches his eye is the decorative sculpture of one of the sides of the inner arch. This wall relief contains perhaps the most famous visual image of the destruction of the Beit Hamikdash, Roman soldiers carrying spoils from the destruction, including the Menorah, the Shulchan and the trumpets.

My wife and I asked a woman to take a picture in front of this wall relief. It turned out that she was a Jew from Los Angeles who was touring the site with two young children and she told us that when she took a picture of her kids in front of the arch, the kids said to her that they don’t think that they should smile for the picture. After all, this is an arch of sadness, the most vivid image of perhaps the greatest tragedy of the Jewish people in history other than the Holocaust. And then I began to wonder. Should my wife and I smile for the picture or not? What should we be thinking in Pesach 2018 as we stand in front of the Arch of Titus? For me, at least, the answer underscored the tension between space and time.

Judaism is a religion of space. There are certain spaces that require different behaviors and attitudes by virtue of certain halachot that we must observe in those spaces, such as a synagogue, a Temple, or a house of mourning. While there is no halachic significance to the Arch of Titus, seeing the image of the Menorah and other holy vessels being led away to Rome accentuates the void that we currently feel or should feel without them and without our Mikdash. And that void deeply pained me.

However, Judaism is also a religion of time. There are certain times during the year when we are commanded to engage in behaviors to feel a certain way, such as Shabbat, holidays or Tisha B’Av. My wife and I visited the Arch of Titus during the holiday of Pesach, a holiday of “v’hee she’amda la’avotainu v’lanu,” a holiday when we celebrated the promise that just as God delivered us from the bonds of Egyptian slavery, God will ultimately deliver us from the hands of our enemies. We will survive, but they won’t. One can only imagine what Titus and Vespasian were thinking when they sacked Jerusalem. They probably thought that this is the end of the ancient Jewish nation because a nation without sovereignty, without its spiritual center and without its holy vessels cannot endure. These Roman leaders also believed that they were divine. After all, the pagan inscription on the Arch of Titus reads, “SENATUS POPULUSQUE ROMANUS DIVO TITO DIVI VESPASIANI F[ILIO] VESPASIANO AUGSUTO” or “The Senate and People of Rome [dedicate this] to the Divine Titus Vespasian Augustus son of the Divine Vespasian.”  The Gemara in Gittin 56b attests to the fact that when Titus entered the Holy of Holies and cut the Parochet, blood spurted forth and, seeing the blood, he mistakenly thought that he had killed God.

However, they didn’t understand the Pesach promise of “V’hee she’amda.” They didn’t realize what we know only too well today. The Roman Empire is dead as are their ancient traditions and customs. But we celebrate Pesach today, just as our ancestors did when we left Egypt and just as our ancestors did when Titus carried away the holy vessels and burned the Beit Hamikdash. We celebrate Pesach which teaches us that true power is not the military power of Pharaoh, Titus or Vespasian. True power is the power of the pen, the power of the scribe, the power of Moshe Rabbenu, hero of the Pesach story, who is known as Safra Rabba D’Yisrael, the great scribe of our people, for transmitting to us a legal system and underlying values which can survive any destruction, even the destruction of our holy Beit Hamikdash and our holy vessels. And that feeling made me smile.

So my wife and I took two pictures by the Arch of Titus: a non-smiling photo and a smiling photo. Visiting the Arch of Titus on Pesach underscored a tension that we often feel as a Jew: feeling joy and gratitude for where we are today, while painfully aware that we stand on the shoulders of our ancestors’ plight.

And in fact, the Pesach Seder is a perfect guide for navigating these complex emotions. We must engage wholeheartedly in the Maggid, telling the stories of our communal pain and transmitting them to our children. The Arch of Titus represents a truly painful time in our history, and one we must still mourn today. But then we pivot, and we sing Hallel, and we thank God that we are here as testimony that the Jewish nation will always endure.