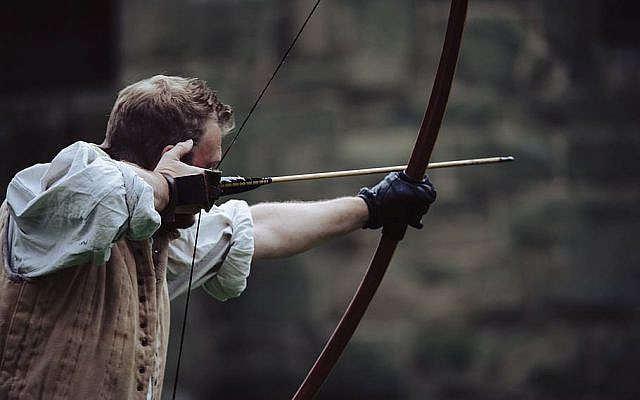 Upon his deathbed Yaakov bequeaths to his favorite son Joseph the city of Shechem, “which I took from the Amorites with my sword and my bow” (Gen. 48:22). As we know, Yaakov was not a swordsman nor was he an archer. His power was in his voice (see Gen. 27:22). As a result, tradition (Bava Batra123a) offers a non-literal rendering of this passage by explaining that “my sword” refers to tefilla (prayer) and “my bow” refers to bakasha (request). Similarly, Targum Onkelos translates Yaakov’s words into Aramaic as “…with my prayer (tzaloti) and my request (bauti).” The juxtaposition of these two words suggests that they do not mean the exact same thing, so what then is the difference between tefilla and bakasha? Moreover, what do these two words for prayer have to do with swords and arrows?

Rabbi Simcha Maimon (a prominent Rosh Yeshiva in Jerusalem) offers two approaches to explaining the difference between tefilla and bakasha. Firstly, he explains that tefilla refers specifically to the “flattering” aspect of prayer in which one praises G-d, while bakasha refers to the “wishful” aspect of prayer in which one asks for his needs from G-d. Secondly, he explains that tefilla denotes formal, institutionalized prayer with set formulae and halachot, while bakasha refers to an ad hoc expression of prayer and request from G-d.

Following his second approach, Rabbi Maimon explains the analogy drawn between these two types of prayer and the two weapons mentioned in the Bible. The link between requests (bakashot) and bows (kashot) may simply be homiletical, as the two words are spelled and pronounced very similarly. Nonetheless, Rabbi Maimon explains how the two are related on a conceptual level. A bakasha is not inherently a powerful form of prayer because it lacks the formality of tefilla, just as an archer’s projectile need not be as sharp as a sword. Nonetheless, the efficacy of an arrow is not in the arrow itself, but in the kinetic energy from its release, just as the efficacy of a bakasha is not inherent in the words of the prayer, but in the supplicant’s feeling of urgency. By contrast, a tefilla is akin to a sword in that the words of tefilla have inherent power just as a sword itself is very sharp, making it inherently dangerous.

Rabbi Shmuel Laniado (a 16th century Syrian scholar) offers a similar observation in connecting bakashot to bows and arrows. The advantage of using a bow and arrow in battle is that the archer does not need to approach his enemy in order to hit him. He can keep a distance from his enemy, yet still manage to wound him. Similarly, bakashot reflect the idea that one standing in This World can experience a dire situation, yet without leaving his physical location his prayer can penetrate the upper realms and reach the Heavens.

Rabbi Yaakov Tzvi Mecklenburg offers another insight into the meaning of the word tefilla and contrasts it with a third term for prayer, techina/tachanun, commonly translated as supplication. He argues that the word tefilla is derived from the word plila (arbitration/judgment, although in Modern Hebrew it means “criminal”), as the petitioner’s plea demands from G-d that He address a perceived injustice. On the other hand, techina/tachanun denotes a form of prayer whereby the supplicant appeals to G-d as one who admits that he is not worthy of that which he requests, but nonetheless beseeches G-d to graciously grant him his needs. This word is derived from the Hebrew word chen (favor) as the supplicant hopes to find “favor” in G-d’s eyes, even as he is undeserving of having his request filled.