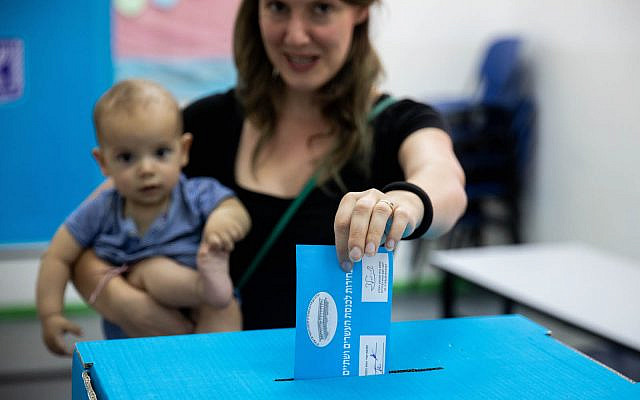 A woman holds her baby as she casts her ballot at a voting station in Jerusalem, during the Knesset Elections, on September 17, 2019. (Yonatan Sindel/Flash90)

Political stalemate and four elections in two years would be enough to keep anyone home on Election Day, especially following twelve months of a global pandemic that has left people worried about their health, economically hurting and emotionally drained. Our latest Israeli Democracy Index, which we presented to President Rivlin in January, showed that trust in our county’s institutions is plummeting and solidarity among the different segments of our society is at an all-time low. So, why should Israelis nevertheless make sure to show up at their polling places on March 23rd?

The latest polls show that the results will be close, meaning that every vote can have a real influence on the makeup of the next government and how its policies will relate to issues we all care about. Our votes will not only decide who will lead our country, but will also a dramatic impact on our personal wellbeing and the future health and vitality of our country.

Here are three reasons it is more important than ever for Israelis to exercise their democratic rights:

First – After a year of economic stagnation, and politicians paralyzed by a crisis of their own making, the next government will have to formulate and implement responsible policies that will rehabilitate our economy, return 800,000 unemployed Israelis to high-quality jobs and create opportunities for long-term growth.

Second – With our political crisis now continuing for over two years, tensions are high as inciteful campaigns and mutual recrimination have left Israeli society more divided than ever. It is imperative that the new government adopt policies aimed at reconciliation and bring Israelis together to focus on issues where there is wide consensus. Israeli society will pay a high price if more extreme political elements are strengthened in this election.

Third – The next government will need to decide if it halts the ongoing attacks on our judiciary and the attempts to curtail the independence of our judicial branch and law enforcement agencies. Or, alternatively, the new government could choose to advance such dangerous policies.  These decisions will have significant implications for the future strength and stability of our democratic way of life.

There is no doubt that the behavior of some of our leading politicians over the course of these past two years had left so many of us disappointed. Our data also shows that most Israelis no longer believe what they say either. Nevertheless, exercising our right to vote is the best tool we have that allows us to positively influence the future of our beloved country.

All this leads to the indisputable conclusion that all Israelis must go out and vote on Election Day. Despite all the challenges, indifference cannot be an option. On March 23rd let’s all celebrate Israeli democracy and be proud of the promise of our country.  Let us all pledge that this time too, we will all show up and vote.

About the Author
Yohanan Plesner is the President of the Israel Democracy Institute. He served as a Member of Knesset for the Kadima party from 2007–2013. He lives in Hod HaSharon with his wife and four daughters.
Comments