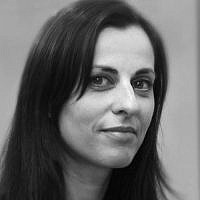 The Blogs
Yaelle Ifrah
Parliamentary advisor, consumer rights fighter
Apply for a Blog
Please note that the posts on The Blogs are contributed by third parties. The opinions, facts and any media content in them are presented solely by the authors, and neither The Times of Israel nor its partners assume any responsibility for them. Please contact us in case of abuse. In case of abuse,
Report this post.

One tends to think less about them, because one buys them for pleasure and not out of necessity, they’re these little extras that we treat ourselves to, on the way to the cashier, that we eat when in need of a little comfort. Yes, you get it, I’m talking about sweets, candies, chocolates and other treats that Israelis are particularly fond of as a people with a famously sweet tooth. All of this of course, to the delight of importers and distributors.

It wouldn’t be fun, would it, if this market too wasn’t run by a good old monopoly ? And indeed no worry, there is one. Let me introduce the cousins Reuven Shlisel and Moni Leyman, owners of Leyman-Shlisel, exclusive distributors in Israel of Loacker, Mentos, Hershey’s, Werther’s, Toffifee, Chupa Chups and a few more, and until three years ago of Ferrero.

Let’s talk a bit about Loacker, the leading brand of wafers in Israel, which reigns on a third of the wafer market. Israelis love wafers, and are the world’s biggest eaters per capita, which is why Loacker’s are sold at a price that’s 162% higher than in the UK, another major wafer country. When you love, you don’t count the cost. The Leyman Shlisel company behaves like other exclusive importers, except that it has a particularly bad reputation in the world of retailers where it’s readily described as “raptor” in view of the very large profit margins it benefits from. Its annual turnover is estimated at 500 million shekels (it’s a family company like almost all the other exclusive importers, which allows it to remain very discreet about its performance and especially its real margins) and its net margin at almost 10%, which is huge by food industry standards. In order to further boost its profits beyond the margins generated by the selling prices of international brands, Leyman Shlisel has its own brands of fairly low quality sweets, the ubiquitous Yogueta and Chocketa, which are sold at more “normal” prices, but probably not lower profits.

In addition, and this is true for all exclusive importers, the 10% increase in the value of the Shekel in 2019, made for lower purchasing prices as these products are bought in Euros, and these lower prices should have been reflected on retail prices and lead to real price cuts … nay.

Very logically, Leyman Shlisel gave an all-out fight against the adoption of the law that made mandatory the labeling of food products that contain too much sugar, salt and fat and which took effect last January. It also scored points by successfully lobbying to get an exemption of labeling on smaller packages, and had the nerve to argue that the reform would increase prices by placing on the importer the obligation to label the products at its own expense ; products on which, it should be remembered, the company sometimes makes margins of more than 100%.

Ferrero’s case is particularly entertaining. Until three years ago, Leyman Shlisel was the exclusive importer and distributor of the brand with products like Nutella, Ferrero Rocher, Kinder, Tic Tac and other sweets. Until the day when the Italians of Ferrero came to Israel for a tiyul and found out that the gross margin of Leyman Shlisel amounted to almost 40% on its products; at the sight of this goose laying golden chocolate eggs, Ferrero decided to take over directly distribution in Israel and pocket the profit, which brought a slight lowering of retail prices of Ferrero products.

Let us add to perfect the portrait of this jolly company, that it fights merciless wars on parallel importers by denouncing them to the rabbinate as selling non-kosher products, which led one of them to the brink of bankruptcy when he tried to import Mentos at a lower price a very common strategy in a market that is choked to death by an impossible combination of native health standards that have no equivalent in the world, feeble to null law enforcement, and dubious kosher practices.
Wafer, anyone ?

About the Author
I made aliya from France four years ago with my family, ie my husband Sacha and my three daughters Deborah, Naomi and Vered. I have an MBA from ESCP Europe. Worked as a TV producer and then restaurateur in France. I'm a parliamentary advisor at the Knesset, and try to expose and dissect the rueful state of Israeli economy when it comes to free markets, monopolies, cost of living and smart consuming.
Comments