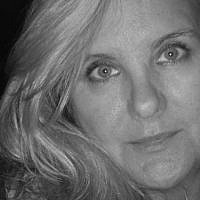 The Blogs
Leslie-Ann Stoffel
Apply for a Blog
Advertisement
Please note that the posts on The Blogs are contributed by third parties. The opinions, facts and any media content in them are presented solely by the authors, and neither The Times of Israel nor its partners assume any responsibility for them. Please contact us in case of abuse. In case of abuse,
Report this post.

The liver cancer was spreading, it wasn’t good. His request was that I come and see him. He was in Hadassah, En Kerem. Neither one of us said it, but he was asking me to come and say goodbye.

We had been a couple once. Circumstances and distance had kept us apart. He had always stayed in touch, there was a special spark, an intertwining of souls kept alive by skype visits and phone calls.

I suppose the vigil of waiting for heaven started then.  It broke my heart to think I’d never hear his velvety voice call me Sweety with such affection, or joke about me being his Scottish woman, (I’m Canadian with Scottish descent), or meet me unexpectedly at the Coffee Bean in Jerusalem on my visits there. I couldn’t bear to think of it so I stopped those thoughts and began to plan the trip from Vancouver to Jerusalem.  The trip to say goodbye.

His mom met us, my mom and myself, at the hospital and escorted us to his room. A thin figure lay on the bed, beard and hair overgrown, so different from the well groomed, impeccably dressed man I knew. He had a somewhat dazed look from severe illness and medication.  It was the look in his eyes of sheer despair and hopelessness that tore my heart to pieces. The tears started to stream down my face. He was being eaten alive by this dreadful disease. I knelt beside his bed and took his hand we both knew what he was facing.

We never stopped praying for him, praying for a miracle that he might be healed.  Everybody was praying.

With my arrival his condition improved somewhat. He got a private room and after about a week of visits he asked me to stay overnight at the hospital with him.

Of course I would.  I went about setting up my life in Hadassah Hospital Oncology Unit, Room 12. The room was equipped with flat screen TV with remote, a small fridge which his mom filled with her delicious Israeli Moroccan cooking and our favorite treats and drinks. There was a small cot for me to sleep on next to his bed. We had a lovely view of the hills of Jerusalem from the window which we tried to enjoy as much as we could. I called it the Israel Hotel just for fun. That was his name, Israel.  And we would have a movie night with popcorn when he was able.  I really tried to keep things as normal as possible for him.

Over the course of the next few weeks our bond became so close. I have never bonded and been so close to any other human being in my life.  When it’s just you, a hospital room and your loved one who is dying, everything is stripped away. It is literally the pureness of souls meeting.

Our love grew so strong and yet I knew he was dying.  He was so very sick. At times he was in so much pain and so distraught at not wanting to die so young, at 49, without having done everything in life he had wanted to. This happens to other people and in the movies, not to me. How will I survive this, watching my friend die right in front of me? Sometimes I would just kneel by the bed, hold his hand and we would both cry. In between tears we would proclaim our love and he would tell me I was his light.

Yom Kippur he apologized to me with his whole heart for anything he had done to hurt me. There had been some difficulty in the history of our relationship. I told him that as soon as I found out how sick he was, I had let go of all that. It didn’t matter anymore. What mattered was now.  But I apologized too. The slate was clean and the connection between us pure and lovely.

Friends and family came to visit bringing gifts, prayers and lots of loving affection.  I had no idea how large his extended family was.  One of them laughed after I exclaimed, “Another cousin?”

On the eve of Sukkot I went to stay over with him. He had a very restless night, but his nights were always restless and I didn’t really think it out of the ordinary although his breathing was more labored than usual. The nurses were aware. I thought we were OK.  I had given him lots of hugs and kisses on his bald head that night knowing he was struggling. He woke up at 2:45AM and asked to get up for a little while for some water.  He had a drink and then went back down to sleep. The doctor and nurse woke me up at 5:30AM to tell me he had passed away peacefully in his sleep.  It is exactly one month since my arrival and 3 years to the day of our having met in Jerusalem.

“No, no Sweety you can’t go! Please come back!  I didn’t know you were going to go. I need to say one last thing to you but you’re not here.” I. Am. Shattered.

I panic and run out of the room to the waiting room not knowing what to do. Then I realize, I can’t leave him alone, so I go back and I sit with him until the family arrives. They are shattered too. His sisters and his mom. His mom cries out, “Shema Israel.” He’s really gone.  I’m shocked and devastated. I don’t want him to go yet.

At the apartment, family and friends start to pour in to pay respects to his mom and sisters. I sit rigid, and numb and I cry.  Many family members, friends, neighbors & people I’ve never met, hug me and thank me for taking care of him in his last days.  My Hebrew is terrible but I hear the word angel peppered throughout and they look at me. This makes me cry even more. He’s really gone.  Strangely though, I’m comforted in this big fat Israeli funeral gathering.

We bury him the next day in Jerusalem.  They bring him out into a stark marble room wrapped in a prayer shawl that evokes thousands of years of Jewish Tradition, poignant in its beauty and yet I feel the cold reality of his absence. My grief overwhelms me.

I experience my first Jewish Sitting of Shiva. The wisdom of the way death is handled in Jewish culture is moving and astounding.  Since he died on Sukkot the Sitting of Shiva could not start until the end of that holiday. So a week later the family and friends begin the ritual of Sitting Shiva for one week.  Lovingly adopted as their angel from Canada, I’m included. This helped me with the grieving process immeasurably. Everyone grieves together. After each milestone I would feel a bit worse but then my heart would heal somewhat.  It ends after 30 days with the last viewing of the grave with the gravestone now in place.   His is beautiful, made from Marble and Jerusalem Stone.

My mother’s wisdom: “Your relationship wasn’t about the beginning part but about the end. The end, when he was going to need you for his journey to heaven.”

About the Author
Leslie-Ann Stoffel is a Canadian pro-Israel advocate and blogger. She is very active in this capacity on Facebook and Twitter with over 21,000 followers. She also writes for The Jewish Press, has reported for Israel National News and has a blog on the CIJA - Center for Israel and Jewish Affairs Blog - The Exchange.
Comments