The Blogs
Melanie Takefman
Apply for a Blog
Advertisement
Please note that the posts on The Blogs are contributed by third parties. The opinions, facts and any media content in them are presented solely by the authors, and neither The Times of Israel nor its partners assume any responsibility for them. Please contact us in case of abuse. In case of abuse,
Report this post. 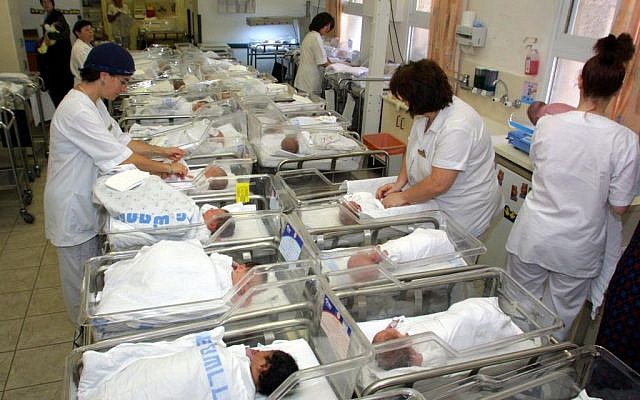 Israel, and much of the Jewish world, prides itself on the advanced status of women. Yet, alongside real strides toward gender equality, Israeli women are the victims of a deeply ingrained and damaging credo: the belief that the sanctity of childbearing trumps everything else.

As we mark International Women’s Day 2018, we must take a hard look at this paradox of Israeli womanhood. By “we,” I mean Israelis and anyone who cares about Israel’s identity as an egalitarian and progressive society.

Israeli women hold top positions in most fields. We are encouraged to be independent and strong.

At the same time, Israelis love kids. “Children are happiness” is a common adage. Kids are always welcome, everywhere; that makes Israel a great place to raise a family.

This phenomenon is reflected in Israel’s birth rate, the highest among OECD countries as of 2015, at 3.1. Israel is part of the Western world by almost any other measure, but when it comes to birthrate, it is part of the Global South, according to Prof. Daphna Hacker, an expert on gender at Tel Aviv University.

Sometimes Israelis’ healthy love of children borders on obsession. When motherhood defines womanhood, and even becomes synonymous with it, we risk infringing upon a woman’s right to choose and to control her own body.

I’ll illustrate this with some personal experiences. Friends, acquaintances, and people I barely know regularly stare at my stomach. “When will you make more children already?” This is because I have “only” two children — two wonderful, healthy boys — and a non-religious, professional, middle-class woman in her late 30s, like me, is expected to have three kids at least.

(These comments pale in comparison to the stigma facing childless women, but that’s another topic.)

There are many reasons why women don’t have children: infertility, failing marriage, economic considerations, or choosing not to. These considerations are intimate and should not be up for public debate.

The same attitude prevails in the workforce. At job interviews, potential employers ask me upfront how many kids I have, how old they are and who will pick them up when I work late. These questions all but erase my master’s degree and 15 years of relevant experience. Even worse, they make me feel like a walking womb.

This situation has repeated itself too many times to chalk it up to bad luck or insensitive employers, notwithstanding the fact that these questions are illegal, because they constitute intent to discriminate.

The media, too, are complicit. Every day, my morning paper is saturated with the cult of childbirth: from an interview with a young actress on “what makes her think about having children” to a feature about a children’s poet, who laments her inability to conceive. In both examples the women’s accomplishments are overshadowed by the potential (or not) to have children.

To be sure, childbirth in Israel isn’t personal; it’s political. Why?

Israel’s cult of childbirth is inextricably linked to the demographic threat — the fact that Palestinians will soon outnumber Jews in the land between the Mediterranean Sea and the Jordan River. The Jewish commandment to “be fruitful and multiply” also plays a part.

It’s not surprising then that Israel is the only country that fully subsidizes fertility treatments for up to two children and until women turn 45 (54 with donor eggs), regardless of marital status.

When asked why Israel is an “international fertility superpower,” Dr. Arik Cahana, the head of gynecological and IVF at a private hospital said, “It all starts with minus six million,” referring to the Holocaust, and extends to Israel’s wars and attacks on Jews in Muslim states. “There are hardly any families in Israel that have not been affected.”

In other words, the future of the Jewish state is in our wombs.

Fertility treatments can be a godsend for those who cannot conceive, and Israel’s policy is very progressive, but the discussion on fertility should not be nationalistic or political.

In this vein, Israeli TV recently aired a documentary about an NGO called, “Or LaMishpachot” (Light unto the Families). Among its activities and services, the organization works hard to convince middle-aged bereaved parents to have children again, claiming it is the only way they can heal themselves. Stories of parents who experience “rebirth” by welcoming new babies into the world after the loss of another child are common in the Israeli media.

I never judge an individual’s choice to have kids, especially if it brings them joy after tragedy; it is a deeply personal decision. What bothers me is the framing. This narrative implies that women can only redeem themselves through procreation.

If the public discourse in Israel continues to bind women to their wombs, we will never achieve true equality, and that does not bode well for Israel’s future.

I call on all Israelis — as well as supporters of Israel abroad — to forge a more nuanced and humane discussion about womanhood. Let’s retain our passion for life and children without subjugating women.

About the Author
Born in Canada and living in Israel since 2003, Melanie Takefman writes about life in Israel, herstory and cross-cultural identity. She is currently working on a book about women and migration.
Related Topics
Related Posts
Melanie Takefman
Comments