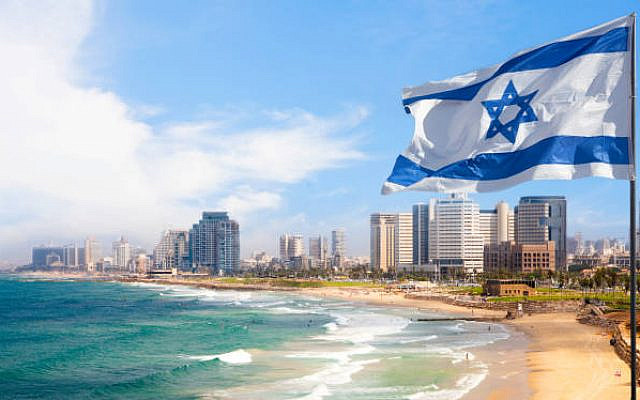 As I travel back to Tel Aviv this week, I cannot help but remind myself just how incredible it is for Jews across the world like myself that Israel exists – a country that connects us to the past, present and future of the Jewish people; a thriving democracy with a strong system of judicial review, freedom of religion and press, and a government that provides equal rights for all its citizens; a refuge for Jews in distress wherever they are in the world. And yet, even with the global rise in antisemitism and the continued attacks on Jews, it seems far too easy to take Israel’s existence for granted, and to forget that antisemitism has been the norm, not the exception, for most of Jewish history.  When Jews have been stateless, the consequences have been particularly dire, culminating in the Holocaust – an organized, industrial effort to exterminate Jews.

While Jews today face rising levels of violent assaults and harassment in the U.S. and globally, we are safer because Israel exists. As younger people have never known a world without Israel, it’s easy to take the assurance of a Jewish state for granted. Our “modern” history is punctuated by restrictions on where we can live and work, dehumanization and delegitimization, pogroms and other acts of violence, expulsions and murder. The gross atrocities of the Holocaust ended just 76 years ago yet in some ways seem like the distant past for many. Only they’re not.

The end of the Holocaust did not end genocide. We only need look to places like Darfur, Cambodia or Rwanda where genocides have taken place.  Sadly, the world did not learn that unbridled hatred can translate into mass murder by one people against another. Contrary to the malicious accusations of some, one place where genocide is most certainly not taking place is in Israel or the Palestinian areas. Palestinians face many obstacles but they do not face genocide; in fact, their population has seen robust growth over the past 50 years.

Antisemitism is a real and active threat around the world. The Anti-Defamation League’s most recent Audit of Antisemitic Incidents in the US recorded the highest level of incidents since it began recording, over 2,100 acts of assault, vandalism and harassment, a 12% increase over the previous year. The threat is global, and it’s growing. ADL’s 2014 poll showed that more than one billion people worldwide hold antisemitic views. It’s easy to think these incidents stem from potentially disturbed people acting alone. But they don’t. Members of Congress – on both sides of the aisle – have used terribly antisemitic language and tropes even in the last year, fueling further acts of violence and inflicting lasting damage.

Current and former far-right lawmakers like Marjorie Taylor Greene and Steve King have publicly espoused incendiary antisemitic rhetoric. Freshman Representative Greene of Georgia has a long history of embracing wildly antisemitic conspiracy theories, such as QAnon, which perpetuates the lies about Jewish elites, globalists, and bankers “controlling the world.” Just a few months ago, Greene compared vaccine passports to the yellow badges that Nazi Germany forced Jewish people to wear during the Holocaust. She’s hardly alone, however, as former Congressman Steve King of Iowa had cultivated many relationships with foreign politicians and groups linked to antisemitic and neo-Nazi groups. All of this clearly foments hatred – instigating deeply disturbing acts of explicit antisemitism, such as the 2017 white supremacist rallies in Charlottesville, where crowds chanted “Jews will not replace us” and the deadly attack in 2018 on the Tree of Life synagogue in Pittsburgh.

On the left, a vocal “blame Israel caucus” continues to leverage every opportunity to delegitimize and demonize Israel, often employing explicitly antisemitic rhetoric and tropes to attempt to substantiate their outrageous claims. Take, for example, Representative Ilhan Omar of Minnesota. In her short tenure on the Hill so far, Omar has already made an appalling number of antisemitic remarks, including claiming that “Israel has hypnotized the world” and suggesting that Jews are buying political support in an outright distasteful “It’s all about the Benjamins baby” tweet. And, just last week, defeated candidate Nina Turner in her concession speech referred to the pro-Israel community’s support of her opponent as “evil money” – the very same day Rep. Rashida Tlaib of Michigan noted that the “same people” are “behind the curtain” manipulating racist policies “from Gaza to Detroit.” These statements reek of antisemitism, evoking hateful antisemitic tropes, that fuel hatred against Jews in the United States and beyond.

At the same time, the BDS movement, rooted in antisemitism, calls for the elimination of the world’s only Jewish state.  It puts Jews at greater risk and actively seeks to cut off Israelis from the rest of the world.  Denying Israel’s right to exist puts Jews everywhere at risk.  In fact, Omar Barghouti, the BDS movement’s founder, has made very clear that the movement rejects a two-state solution, or any solution that involves self-determination by the Jewish people. He has even outwardly stated, “Jews are not a people…the UN’s principle of the right to self-determination applies only to colonized people who want to acquire their rights.”  He’s wrong – Jews are part of one of the oldest existing people groups in the world today, charting a history that goes back at least 3,000 years, and even more according to the Bible.

Israel is a refuge from past and present threats of antisemitism. And that is one reason why the U.S.-Israel relationship is so important to me, and many others. Standing against antisemitism means supporting the Jewish people’s right to self-determination and acknowledging their right to self-defense, particularly in the face of constant threats of annihilation and terrorist attacks.

Fortunately, we see many signs of hope for combatting antisemitism – from leadership from the Special Envoy to Monitor and Combat Antisemitism at the State Department to leaders in Congress on both sides of the aisle who have come forward to support the U.S.-Israel relationship and to fight antisemitism. In fact, just earlier this month, Democratic voters in Ohio elected Shontel Brown in a special election primary, who spoke clearly and passionately about her support for the U.S.-Israel relationship and her stance against antisemitism.

Every time I’m in Israel, I’m amazed at what my fellow Jews have achieved in just 100 years.  Today, Israel is a thriving, although certainly not perfect, country that provides Jews and many others across the globe a beacon of hope.  Israel is home to hundreds of tech start-ups and scientific research centers that continue to spring up across the country; it is home to centers of academic and religious learning; it is home to Jews from around the world who returned to the land of Israel, willingly or because they had nowhere else to go as they fled persecution.  I’m in awe of the diversity of faces I see, living peacefully with each other, and I’m humbled by the strength and resilience of the Jewish people who made the decision in the late 19th and early 20th centuries to rebuild Zion – and then did so.

The issues in Israel are not simple, and they certainly cannot be adequately debated in a Tweet; they are complicated and difficult.  But as we grapple with these tough issues, we must remember to take a step back and observe with awe and humility all that Israel has achieved and what it represents for the Jewish people – a place to call home that connects with our past and our future, a certain refuge in the face of persecution, and a source of pride that empowers us to stand up to antisemitism in ways we could not in the past.

Antisemitism is a disease of the human history, a virus that morphs to fit the moment.  But today, with Israel on the map, we are much better equipped to fight it.  That’s why support for the US-Israel relationship is so critical – in strengthening that relationship, we help Israel thrive in ways that produce innumerable benefits for the U.S., Israel and the world, including the fight against antisemitism.