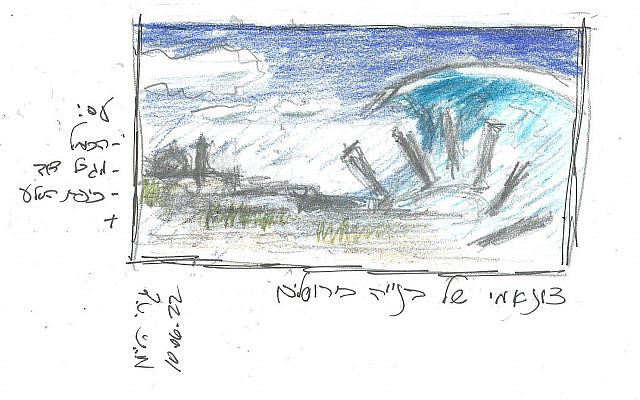 My sketch of the tsunami of building that is harming Jerusalem. (courtesy)

“Jerusalem must not let opportunism rule. Make this clear to those who think they can rule the world by jingling money in their pockets.” — Louis I. Kahn (The Jerusalem Committee,  June 1973)

In the face of powerful and manipulative real-estate developers, Jerusalem of Gold is being swept away in a tsunami of reckless building. Evident is the weakness of elected public officials and professionals within the municipality. Planning and Building Committees have been reduced to rubber stamps. Each project is being dealt with, if at all, on an individual basis, with no comprehensive long-range planning whatsoever, neighborhoods and the city be damned.

Setting up an international committee made of top-flight city planners and architects to review the municipality’s present policies is urgent, their recommendations to help guide the city’s growth, binding. Such a committee, formed by Teddy Kollek in the early ‘70s, had positive results.

Let’s examine some of the consequences of the massive building without a plan that has taken over the city. Poor tower design, for example, can overwhelm pedestrian and public open space (the public realm), impact the existing social and environmental context, invade privacy, lead to the deterioration of a neighborhood’s character, and contribute to negative microclimate and environmental issues.

As towers stand out, aesthetic considerations become paramount. Talented architects, of which there are few, are needed to design them and give them human scale, but as talent is a God-given gift, we are already stuck with hundreds of eye sores. And as computer-assisted design can duplicate even the most complex plans at the touch of a key, we’ll be stuck with more of them every passing day. Jerusalem’s skyline, including the visual basin of the Old City has been impacted.

Set back from the street, free-standing towers, thick columns if you will, disrupt the continuity of the street and in themselves are unable to define public or private open space. Lifeless streets will become the norm, neighborhoods severely damaged. Towers impair social intercourse both inside and out. Those living in towers hardly know each other, as people don’t socialize in underground parking garages or elevators.

Never mentioned is that tower maintenance is extremely costly. Management firms are taken on to care for them. Renovating or repairing towers, their elevators or cladding for example, is expensive. Their materials and machinery must be of the highest quality. Their residents, out of money, they will deteriorate as has already occurred in Tel-Aviv.

The mad rush for more and more of less and less for maximum short-term profit, if not outright greed, we must add, has the full support of Jerusalem mayor Moshe Lion. No one seems to have considered the severe consequences this tsunami of building without a comprehensive plan will have on the future of the city.

About the Author
Gerard Heumann is an architect and town planner in Jerusalem.
Related Topics
Related Posts