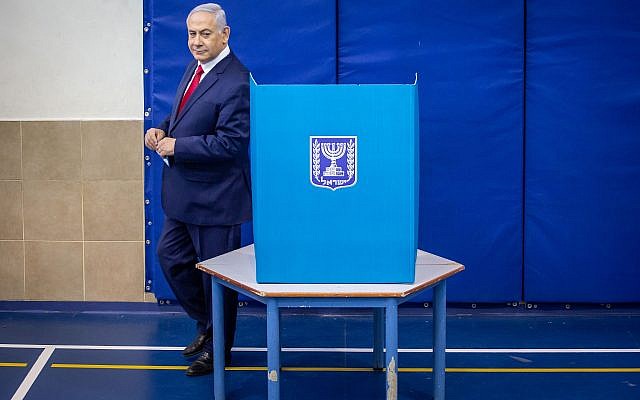 As voting drew to a close in the Israeli elections, ‘shared society’ groups anxiously reviewed the polling data. At the last elections in 2015, Netanyahu, in a blatantly divisive effort to make sure voters on the right did not sit on their hands, infamously warned that Israeli-Arabs were flocking to the polls in ‘droves’. The first ‘Arab List’, a unified ticket of Israeli-Arab parties and candidates, was designed to ensure maximum Arab representation in the Knesset.

This election, which is set to make Netanyahu Israel’s longest-serving prime minister, was very different. Late in the day, the turnout among Israel’s 870,000 qualified Arab voters was still below 30 percent, the threshold required to make it to the Knesset. Only a rush to the polls in the final hours ensured Arabs would be properly represented. The numbers eventually receiving mandates fell from 13 last time to ten.

Any hopes Israel’s Arabs may have had of making a big impression on Israeli politics have been savaged by the past four years as the right has extended its grip on power and Arab citizens have come to feel marginalised. In the weeks before the election, representatives of the leading Arab parties reached out to ex-army chief-of-staff Benny Gantz’s centre right Blue & White party offering potential support.

Gantz refused, apparently believing bringing the Arab parties under his flag would be a mistake – a signal that Gatz despite his centrist narrative was more to the right than anything else and that no major Israel-Jewish political movement is yet ready to embrace fully the country’s sizeable Arab minority.

Netanyahu’s most recent term was marked by a sharp dichotomy. His budgets included the biggest support for the Arab sector in Israel’s history with a five-year $4.3bn package made in 2015. It was designed to be distributed via Arab mayors giving them power to improve their communities.

The goal was not entirely altruistic. Netanyahu and Israel are proud of their status as a member of the elite club of OECD developed countries. But maintaining that status requires closing the gap between the richest and poorest segments of Israeli society which includes the Bedouin.

Economic aid  has not been matched in terms of civil rights. The ‘Nation State Law’ and other actions are seen by Israeli-Arab activists and society as a direct affront to 20 percent of citizens of non-Jewish origin. In short, it is a community which in spite of paying a vital role in society, particularly in healthcare, feels its rights are under siege.

The overwhelming power of the right and centre right has left behind the Israel Labour Party and the parties of the left, including the Arab groupings. Everyone awaits the unknown ‘Trump plan’, which Israeli-Arabs fear will lessen their status further.

One possibility to give a greater voice to the Arab minority and parties of the left is to form a joint Israel-Arab party bringing together the voices of the leftish Meretz and the Arab parties to provide a counterweight to the conservatives in future elections.

A key objective of such a party would be to revoke the Nation State Law and put a focus on the Declaration of Independence, which guarantees the civil rights of Arab citizens. That may seem a long way off, but not if the corruption indictment sticks for Netanyahu and a new election is triggered.

The message of Pesach is one of freedom and how the Israelites escaped the captivity of Egypt and regained their rights and eventually their homeland. It is a chance for Israel’s leaders to remember the liberal vision of their predecessors when it comes to the minorities in their midst.