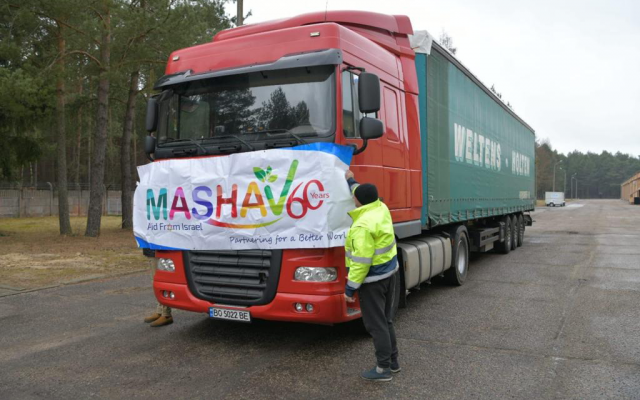 Mashav, Israel’s Agency for International Development, delivered one ton of humanitarian aid to Poland on Friday, March 4, 2022, destined for Ukraine. The goods are being distributed inside Ukraine’s battered cities and towns, where residents have suffered the horrors of war, while Russia continues its assault.

For those Ukrainians who cannot flee to the borders, the supplies are a welcome relief during a cold and harsh winter, when food, water, warm blankets, medicine, and other basic needs are already in short supply in some areas.

Israel’s Foreign Ministry has sent emissaries to assist Israelis, Jewish Ukrainians, and others crossing from Ukraine into bordering countries. Besides Poland, diplomats are stationed in Romania, Hungary, Moldova, and Slovakia.

Israeli Ambassador Dan Oryan, along with Consulate Michal Kali, are assisting the government of Slovakia. On Friday, they transferred the first of three shipments to the Zakarpattia region near Slovakia’s border with Ukraine.

Israeli Foreign Ministry representatives have been preparing absorption and aid centers for Ukrainian refugees, including personal care items donated by an Israeli company. Soon, they will also receive needed generators and medical equipment. It’s possible an Israeli field hospital could eventually be set-up, depending on how long the war rages on.

The government of Slovakia has done its part in providing essential needs to Ukrainians passing through, who will either fly to Israel, or find their way to European nations. Reportedly, Slovakia’s Finance Minister Igor Matovic, has committed to shelter refugees coming from Ukraine, including some financial aid, to help accommodate the thousands fleeing the Russian invasion. Many refugees arrive with only the clothes they are wearing and a few small things in one or two bags.

Ambassador Oryan spoke to this writer about what it is like serving those who are crossing into Slovakia. His main purpose has been to assist Israelis and Jews who come out of Ukraine, but he and his colleagues are also helping all Ukrainian refugees that need aid.

While the numbers are smaller in Slovakia than in other bordering countries, Oryan said, “We have wonderful cooperation with the Slovaks. They created a center with many organizations working with volunteers.”

Reports indicate that more than 72,200 Ukrainians have fled to the neighboring country of Slovakia. Israel’s Foreign Ministry is providing temporary shelter, along with food, beverages, blankets, pillows, cushions, clothing, and other supplies to Ukrainian refugees. It takes the Ukrainians days to get to the border, by bus, car, or on foot. Some come in wheelchairs. There are small children arriving, as well.

Then, the refugees spend additional hours waiting in line to cross over into Slovakia. At the beginning of the war there was personal anxiety and pressure, and people were violent. However, while those reactions have decreased, the Ukrainian side of the border is not as well-organized as the Slovakian side.

“People are coming to us after they have waited for hours in lines on the Ukraine side. So, there is very little patience. They are tired, hungry, and traumatized. These are the main problems. There is a lot of fear about the future. Some of them don’t know what they want to do and where to go. Also, they are very much afraid because many of them leave behind part of the family, especially the men,” Oryan noted.

Ukrainian men are not allowed to exit the country as they are conscripted into the Ukrainian armed forces (unless they are exempt from serving). Therefore, families must split apart, which is very emotional.

“There are also women who are in jobs as nurses and doctors, and they are not allowed to go out of Ukraine, which makes it even more difficult,” according to Oryan.

Heated tents have been provided by the Red Cross for refugees that need some sleep before moving on, during very cold windy nights. There is also a type of market set-up, where refugees can find complimentary items for the journey to their next destination.

Oryan talked about some other conveniences that have been provided. “We got some good showers with hot running water, and special separate areas for women and children, as well. And places to rest. Also, a lot of areas where they can get cookies, cakes, and hot tea. There are games and books in the tents. It’s only a station. They mainly want to rest, get equipped, and go…. Chefs Without Borders are here, too, and give the people specially prepared food,” Oryan mentioned.

Telecommunications companies have been donating sim cards, and offering free minutes to talk, so refugees can be in touch with their families. Often, volunteers at the border pick up refugees and take them for a night or two into their own homes. Others provide transportation to get refugees to airports and other destinations.

One of the reasons that Slovakia has not been the most popular border to get to, is that it is further away from the cities that are under attack in Ukraine. It’s basically harder to get there when people are fleeing. Oryan thinks the situation on the border could become more severe, with a much larger influx of people, if the war drags on.

How do the emissaries know who the Israelis are, and the potential Jewish immigrants crossing the border?

Oryan explained, “You don’t know unless you are contacted before. Israel has published many telephone numbers. Ukrainian Jews and Israelis are calling all the time to get advice, and to register in case they need our assistance. If someone is coming, I know in advance. We are doing our best to be there, next to the border where we can help them. Some of them need documentation. Some of them have out-of-date papers. They need quick consular work.”

The Israeli Foreign Ministry is there to provide help, without trying to talk people into going to Israel. “We want them to be safe,” Oryan claimed. “Everybody knows about Israel. We don’t have to advertise.”

Oryan adds that many Ukrainians ask about Israel, anyway. They either want to come for a short time, or they want details about Aliyah (immigration to Israel).

After being in Slovakia for one or two days, what’s next for the refugees coming through?

Oryan replied, “It depends on their plans. Some are sent to Budapest to fly to Israel; others continue to Vienna, Prague, Germany – it depends, again, on the personal plans of the people. But we offer them to come to Israel, especially for the Israelis and for the Jews, and in some cases, for others.”

So, what can people do to assist?

Oryan explained that they can help by sending financial donations to organizations working on the borders. Others should tell the stories of the refugees and spread the word about what is happening now in the war effort. It’s very important to be involved. 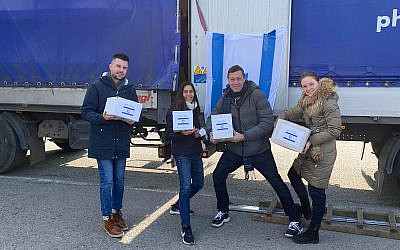 Israeli Foreign Ministry workers, including Ambassador Dan Oryan (in the middle), delivering packages to an Israeli absorption and aid center in Slovakia. On the border with Ukraine (courtesy, Israeli MFA) 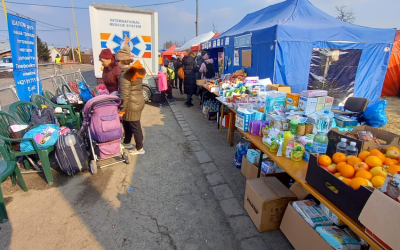 Market area at the Israeli absorption and aid center in Slovakia on the border with Ukraine (courtesy, Israeli MFA) 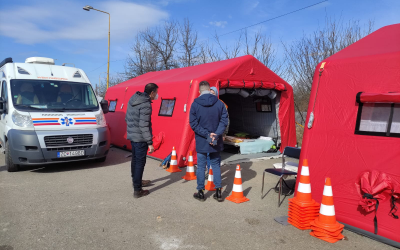 Tents set up at the Israeli absorption and aid center in Slovakia on the border with Ukraine (courtesy, Israeli MFA) 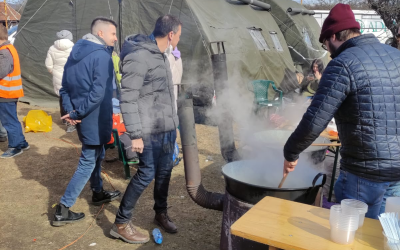 Meeting the needs of Ukrainian refugees at an Israeli absorption and aid center in Slovakia on the border with Ukraine (courtesy, Israeli MFA) 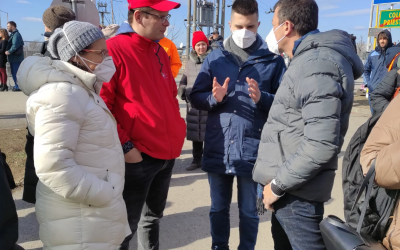 Discussing the challenges in serving Ukrainian refugees at the Israeli absorption and aid center in Slovakia on the Ukrainian border (courtesy, Israeli MFA) 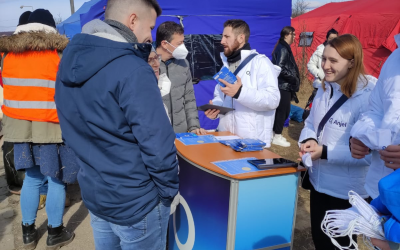 Meeting the needs of Ukrainian refugees and Israelis coming through the Israeli absorption and aid center in Slovakia on the border with Ukraine (courtesy, Israeli MFA)
About the Author
Carrie Hart is a news analyst reporting on political, diplomatic, military and social issues as they relate to Israel, the Middle East, and the international community.
Related Topics
Related Posts
Comments