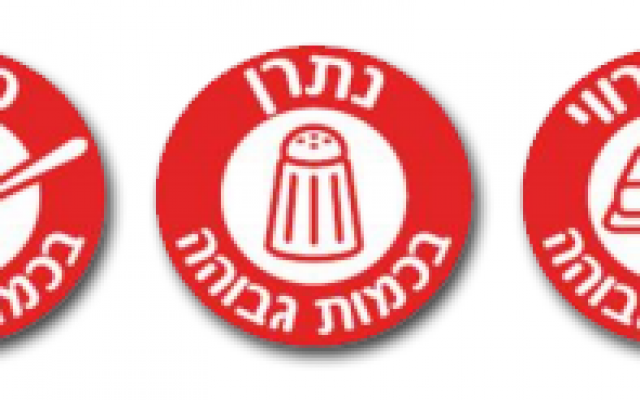 I was about to enjoy my lunch when I noticed the warnings. My pot of jam, with a tempting picture of a bunch of blackberries, had large circular symbols. ‘High in Sugar’, one proclaimed. ‘High in Fat’, I was told. Without stopping to check if the fat was saturated or unsaturated, I quickly dropped the pot back on the table. Who would want to eat anything so dangerous to their health?

These symbols, known as HFSS, are used to mark all food and non-alcoholic drinks as High in Fat, Salt, and/or Sugar, according to the Public Health of England’s Nutrient Profiling Model. It is important to note that we are talking about the English Nutrient Profiling Model as there are some 39 other models in use around the world and we do not want to be confused, (or should I say, more confused).

Israel has adopted the HFSS designation method which became mandatory on 1 January 2020.

As usual over lunch, on television, Sky News was mumbling to itself. Suddenly, the much-feared warning appeared – “this report may contain flash photography”. I quickly ducked beneath the table, a risky business as there was no ‘mind your head’ warning. (I have written to the TV authorities pointing out this oversight.)

While under the table, waiting for the thoughtless press photographers to stop trying to endanger any of the 2,250 photo-sensitive people with epilepsy (out of a population of just 60 million) in Britain who might be watching, I had a thought.

We need a new classification, the HLDU. Yes, my suggestion could revolutionise life in Israel. This classification, ‘High in Laziness, Deception and Unworthiness’, would require all Members of Knesset  to wear a label carrying large circular symbols. These symbols would tell us:

Even better would be a ‘Tastes Good’ icon. We could all enjoy our food in peace.
And how much harm can a little sugar do? Perhaps I will have some blackberry jam.