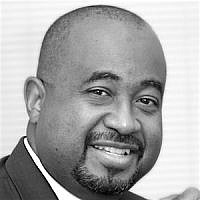 The Blogs
Patrick D. John
Apply for a Blog
Advertisement
Please note that the posts on The Blogs are contributed by third parties. The opinions, facts and any media content in them are presented solely by the authors, and neither The Times of Israel nor its partners assume any responsibility for them. Please contact us in case of abuse. In case of abuse,
Report this post.

Recently Chief Rabbi Yitzhak Yosef made some controversial remarks, which he apparently feels no need to apologize for. It’s been reported that during a sermon he compared “negroes” to monkeys. Specifically, he’s reported to have said:

“We don’t say a blessing for every Negro … He needs to be a Negro whose father and mother are white … if you know, they had a monkey for a son, they had a son like that…

You go around in the streets of America, every five minutes you will see a Negro. Do you bless him as an ‘exceptional creature?’ However, he should be a negro whose father and mother are white…”

Being a rather unexceptional Negro myself, I was puzzled by the rabbi’s comments. What struck me initially was the idea that two White people could make a Black baby. I don’t know of any such thing ever happening in real life. But I guess if that were to happen — if two Whites did make a Black baby — that would by definition be some sort of miracle. So maybe the rabbi was just trying to say that such a miracle baby would be an “exceptional creature” that deserves to be blessed. Which begs the questions: what about normal Negros like me (both my parents are Black)? Why don’t I get blessed too? Is it because I’m not an “exceptional creature”? Are normal Negroes also like monkeys, or only exceptional Negroes like monkeys? I wasn’t sure from the rabbi’s comments how he feels about us normal, average, run-of-the-mill, garden variety Negroes.

And speaking of normal Negroes and how people feel about us, the rabbi’s comments reminded me of poor Moses. Moses went out and got him some brown sugar, but when he brings her home to the family, it’s like an ancient biblical version of that movie, “Guess Who’s Coming To Dinner?” We’re taught in Numbers 12 that Moses’ sister, Miriam, and brother Aaron complained about the fact that Moses married a Negro woman (from Ethiopia). I think it’s safe to assume that Moses’ Black wife was just a normal Negro like me, rather than an exceptional Negro. I can’t imagine Miriam and Aaron giving Moses such a hard time if his wife were an “exceptional creature.” God was very upset with Miriam and Aaron for raining on Moses’ parade. So upset that he gave Miriam leprosy. Numbers 12:10 says God made Miriam’s skin “leprous [a] — it became as white as snow.” So Rabbi Yosef needs to be careful. If God’s reaction to Miriam is any indication of how God feels about racial discrimination, then Rabbi Yosef should run to the nearest drug store and buy every bottle of witch hazel he can get his hands on.

Rabbi’ Yosef’s comments are at best racially insensitive, if not blatantly racist. Even assuming that he has not a single racist bone in his body (a charitable assumption, to be sure), he is a leader. Leadership means that when you put your foot in your mouth, you need to own it, and graciously apologize for a momentary lapse of judgment. That’s what Rabbi Yosef should have done. Instead, what he’s actually done is taken off his sandals, put on a pair of cleats, and he’s standing his ground. But his cleats won’t help him, because he’s standing on sand. I’m a Christian, so I make no claim to be an expert on the Talmud. But I can read. (Yes, Rabbi Yosef, I know it may surprise you that us normal Negroes can read). I took a look at Berakhot 58b, which Rabbi Yosef attempts to use to shield his controversial comments from criticism. This is what the whole paragraph says:

R. Joshua b. Levi said: On seeing pock-marked persons one says: Blessed be He who makes strange creatures. An objection was raised: If one sees a negro, a very red or very white person, a hunchback, a dwarf or a dropsical person, he says: Blessed be He who makes strange creatures. If he sees one with an amputated limb, or blind, or flatheaded, or lame, or smitten with boils, or pock-marked, he says: Blessed be the true Judge! — There is no contradiction; one blessing is said if he is so from birth, the other if he became so afterwards. A proof of this is that he is placed in the same category as one with an amputated limb; this proves it.

As you can see, the talmudic reference mentions not just “Negroes,” but also a person who is “very white.” Reading just from the text, it appears that normal Negroes like me should be blessed too — I don’t need to be the product of White parents. But not just normal Negroes get blessed. A very white person should also be blessed (and others who are pock-marked; i.e., defective in some way). By the way, Rabbi Yosef, from the photos of you that I saw on the internet, you look pretty pale. But that’s good news. It means you qualify for a blessing as a “very white person”! So why would Rabbi Yosef choose to make a comparison between Blacks and monkeys from this text? Your guess is as good as mine.

The larger problem that I’m guessing Rabbi Yosef doesn’t understand, is that such racial insensitivity actually hurts Israel’s quest to be accepted (and left alone) by the world. Surrounded by enemies who feel that Israel has no right to exist as a Jewish state, it’s critical that Israel do everything in her power to maintain her moral authority in the world. As Dr. King said of America decades ago — if America is to be a first class nation, it can no longer have second class citizens. Starting in the 1940s and continuing through the 1960s, Communist nations used America’s discrimination against Blacks as a propaganda tool. They challenged America’s moral authority to lead the world, in light of how America treated her own Black citizens. It was not an act of White altruism that made Brown v. the Board of Education a unanimous decision, or that caused President Eisenhower to use federal troops to enforce the Court’s ruling in that case. America took these steps as much for its own self-interest as for the benefits of Blacks. In the 1940s and 1950s, Black and Brown nations were raising up in revolution against their European (i.e., White) colonial oppressors. At the time, none of those European oppressors was Communist. So the Communists pointed to America’s racial brutality, and asked emerging Black and Brown nations a rhetorical question: given how America treats its own Black citizens, then what do you think America has in store for you? America’s racism against Blacks caused Black and Brown nations to ally themselves with the Soviet Union. America needed to end racial segregation as part of its Cold War efforts — not because White America suddenly fell in love with Black people.

Take a hint, Rabbi Yosef. Israel is already perceived by many as an “apartheid state.” Personally, I disagree with that characterization. But as a leader, Rabbi, you should be mindful of Israel’s need to be perceived as a tolerant nation. And let’s not forget that your incendiary comments come just months after Israel deported a Black Kenyan Jew (Yehuda Kimani), without even letting him call his Israeli sponsors before being forced on a plane out of Israel. Unfortunately, there have been several instances where Black Jews have had to beg and plead for Israel to recognize them as authentic Jews. This is so ironic, when one considers that Judaism did not originate in Europe, and that the earliest Jews couldn’t have been White. You don’t have to like us Negroes, Rabbi Yosef. But as a leader, you should realize that it’s in Israel’s best interest for you to learn to play nice with us. Black people are a substantial voting block in the US. Do you really want to alienate us? Would you like for Black Lives Matter to continue to characterize Israel as an “apartheid state”? Perhaps you think you don’t need Negroes. Maybe that’s why you can make such insensitive comments and express no remorse. Beware, Rabbi. Like it or not, we all need each other. As Dr. King wrote in his “Letter from a Birmingham Jail”:

My advice to you, Rabbi Yosef, is that you fall on your sword and apologize for your racially insensitive remarks. If you won’t do that, then you may consider preemptively applying witch hazel to your skin right now.

About the Author
Patrick Dankwa John is a Black Christian attorney living and working in the Chicago area. He is the president of Chicago's Decalogue Society of Lawyers, America's oldest Jewish bar association. He is Decalogue's first Black and first Christian president. Pat believes that Christians should embrace the Jewishness of Jesus and speak up against anti-Semitism. He grew up for several years in Brooklyn, NY and completed his undergraduate education at the City College of NY in Harlem, where he majored in Urban Legal Studies and minored in Black Studies. Pat is originally from Guyana, South America, a place of great religious diversity. Guyana celebrates the major religions of Christianity, Islam and Hinduism. Guyana's first female president was Jewish--Janet Jagan (f/k/a Janet Rosenberg). The views expressed are Pat's alone, and do not necessarily reflect the views of the Decalogue Society Of Lawyers, or any other organization.
Related Topics
Related Posts
Patrick D. John
Comments