One of the most iconic photographs of the freedom march in Selma, Alabama, shows Rev Martin Luther King Jr. walking in a row with Rabbi Abraham Joshua Heschel. Heschel’s placement was not by accident. The picture was choreographed by King. Edward Kaplan, Heschel’s biographer, writes that “Heschel insisted that he be placed in the first row…With his yarmulke, white hair, and beard, Heschel knew that he looked like what the popular imagination thought of as a ‘rabbi’.” (Spiritual Radical, p. 223) Heschel’s prescience paid off, and the picture brought pride to Jews to this day. This picture remains one of the most famous photographs of an American rabbi. It has become a symbol of American Judaism. Heschel, the activist, became synonymous with the myth of American Jew’s fight for civil rights, against the Vietnam war, support of freedom for Soviet Jewry, and changes in Jewish-Christian relations. In a sense, Heschel, who was also an ardent Zionist, probably more than any other rabbinic figure, has become the icon of American liberal Jewish values. 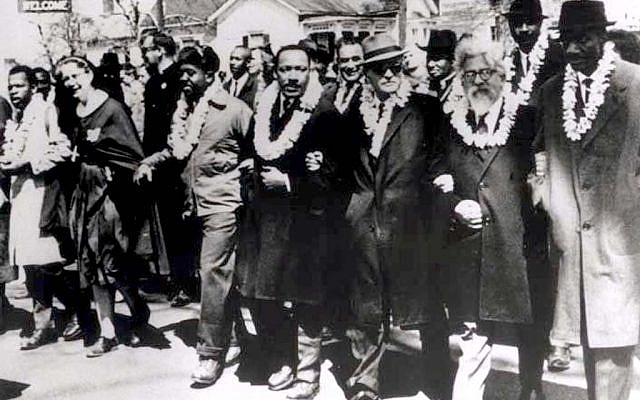 But what about Orthodoxy?

Heschel descended from illustrious Hassidic dynasties. His parents named him after one of the most famous Hassidic rebbes, the Apter Rov, Rabbi Avraham Yehoshua Heshel of Apta, author of the Ohev Yisroel. The prodigy received semikha in his youth, but the outside world pulled his heart. He received a high school diploma and studied at the University of Berlin and the non-Orthodox Hoschshule. Fleeing the Nazis, he made his way, after a brief stay in London, to America in 1940. Saved by the President of Hebrew Union College, Heschel landed a job teaching in the Reform seminary. By 1946, he moved to the flagship institution of Conservative Judaism, The Jewish Theological Seminary, where he taught until his untimely death at age 65 in 1972.

So was he Reform? Conservative? What?

The problem lies in the question. Why should we care?

Heschel was a prolific writer, poet, and theologian. His works range the whole gamut of Jewish studies and languages. He wrote seminal academic works on the Bible, Talmud, medieval philosophy, Hassidut, and Kabbalah. In addition, he wrote profound works on Jewish theology and popular books for a broad audience. His most significant concern was to promote a Jewish view of the world. In a lecture he gave in to Jewish school teachers, he proclaimed,

This past week commemorated Heschel’s 50th yahrzeit. This memorial coincides nicely with the United States celebration of the birthday of Heschel’s dear friend, the Reverand Martin Luther King Jr. The reactions to Heschel’s yahrzeit are fascinating.

Tradition Journal, under the steady stewardship of the incredible Rabbi Jeffery Saks, recently published my lengthy investigation into a theological disagreement between Rabbi Heschel and Rabbi Eliezer Berkovits. Berkovits, a profound thinker in his own right, challenged Heschel on central theological premises. However, other Orthodox rabbis disagreed with Berkovits’ critique. In the wake of my article, which received mostly positive feedback, some people harshly challenged discussing Heschel’s theology. One Orthodox commentator on Facebook wrote, “what do I care what Mr. [sic] Heschel has to say.”

In addition to the opportune timing of my piece in a journal dedicated to Orthodox thought, several Orthodox institutions held memorial events. Ohr Torah Stone’s Yeshivat Machanaim devoted a day to Heschel’s works, as did Yeshivat Chovevei Torah.

Yet the openness of some in the Orthodox world to Heschel’s voice has not been welcomed by all. As one well-known Orthodox rabbi wrote on Facebook, “I’m just looking around at (for example) all the people celebrating the 50th yahrtzeit of Prof. Abraham J. Heschel and wondering what the definition is of Orthodoxy.”

So was Heschel Orthodox?

It is known that Rabbi Joseph Dov Soloveitchik, considered by many, this writer included, to be one of the most important rabbinic figures in the twentieth century, disagreed with many of Heschel’s statements. The Rav, as he is called by his students, viewed the starting point of all Jewish thought through the lens of Jewish law. Heschel argued that Aggadah, or the non-legal writings of the sages, was equally important. Heschel promoted expansive interdenominational dialogue, whereas the Rav argued for limited discussions. Heschel claimed that what he saw as a new emphasis on punctilious attention to Jewish law endangered the spirit of the law. The Rav argued that halacha and the Jewish spirit were inseparable. Rabbi Heschel promoted activism, while Rabbi Soloveitchik remained in the Beit Midrash. Heschel taught Conservative rabbis while the Rav lectured at the Orthodox Yeshiva University.

All this is true. But one wonders, what have we gained by drawing lines in the sand and does it matter how one defines another person? Maimonides famously declared in the introduction to his commentary on Ethics of the Fathers, “accept the Truth from whoever says it.” Can we not take Maimonides’ position to heart and learn from everyone? In Ethics of the Fathers, Ben Zoma says, “who is wise, one who learns from every person.” (4:1). The focus is “every person,” not “every person just like me.”

Isn’t learning from everyone the Jewish ideal?

Besides his powerful writing, Heschel should stand out to all people of conscience as a beacon of ethical action. Rabbi Heschel’s daughter, Prof. Susanah Heschel, recounted her father’s response when he returned from the march in Alabama.

When he came home from Selma in 1965, my father wrote, ‘For many of us the march from Selma to Montgomery was about protest and prayer. Legs are not lips and walking is not kneeling. And yet our legs uttered songs. Even without words, our march was worship. I felt my legs were praying.’

Who cannot but be moved by such a man. I often feel that the boxes we Jews create are the most significant impediments to spiritual growth. We waste too much time and energy reflecting on what we are not rather than on what we can be. Hearing God’s voice is not the monopoly of any human being. Rabbi Yehuda Aryeh Leib Alter, the author of the Sefat Emet, related that God calls out constantly. The call is universal to every person. What made the patriarch Abraham special was that he listened. In a way, I often feel that way about Abraham Joshua Heschel. Indeed, we are called to harken to His voice, and Heschel listened.

So, indeed, the problem is the question itself. The story goes that when a reporter asked Heschel if he considered himself Orthodox, Conservative, or Reform, he responded, “I am not a Jew in search of an adjective.” This, too is a message we can learn from him today.

About the Author
Rabbi Berman is the Associate Director at Yeshivat Eretz HaTzvi. In addition, he has held numerous posts in education from the high school level through adult education. He founded the Jewish Learning Initiative (JLI) at Brandeis University and served as rabbinic advisory to the Orthodox community there for several years. Previously, he was a RaM at Midreshet Lindenbaum where he also served as the Rav of the dormitory.