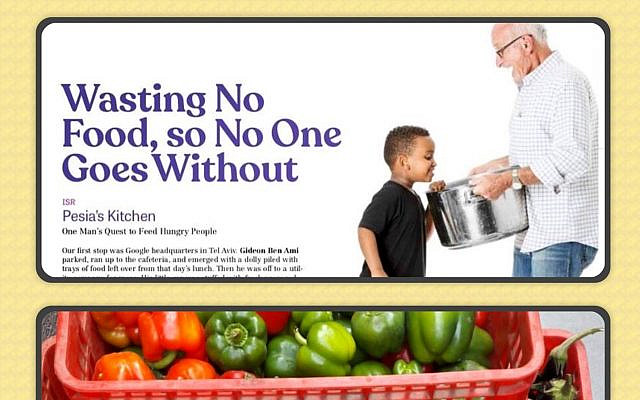 Pesia's Kitchen receives food donations from partners all over the country, including Leket – the Israeli national food bank, and companies such as Google, Waze, Pelephone and Israel Electric. Spring, 2018. Courtesy of Pesia's Kitchen.

Lately I feel like we are setting up a new kind of household, with new rhythms to life in quarantine. We’re always used to getting somewhere in life and now we are told to go nowhere. This has sent many of us straight into our kitchens, where we are continually improvising and cooking creatively from our pantries. As many of us were taught in our grandmother’s kitchen years ago, there is a singular comfort in feeding those we love. It’s part of our inheritance that we can bring wherever we go, making sure that any place we are can feel like home.

While my family and I aren’t able to share meals these days with my own parents and in-laws, I can see how much they are still able to teach my kids about life. Their newly imposed label, members of a ‘vulnerable population,’ seems entirely at odds with their perspective. And with their vitality coming over the phone and computers at full volume, they are showing us how to find beauty even in these precarious times.

I checked in recently with Gideon Ben Ami, another grandparent in a large family who has thought carefully about his family’s legacy, food as love and what it means to live a fulfilling life. Gideon has been working over the past few years to ameliorate ‘routine’ hunger in Tel Aviv’s poorest neighborhoods, never accepting that there should be anything routine about it. After spending decades running restaurants in the US and Israel, Gideon started Pesia’s Kitchen with his extended family, naming it in honor of his own grandmother who fed those neighbors in need out of her home in Poland in the 1920s.

A gathering in 2018 of many of Pesia’s descendants who are engaged in the work of Pesia’s kitchen. Winter, 2016. Courtesy of Pesia’s Kitchen.

Back in 2010, at age 65, when his contemporaries might have been slowing down, Gideon was just getting started, adding miles to his car as he collected and distributed food that would otherwise have been thrown away. It was around this time that his family got together at a long-awaited reunion and decided to formally establish a nonprofit, with Pesia’s grandchildren and even her great, great grandchildren now officially carrying on her legacy of generosity and service. 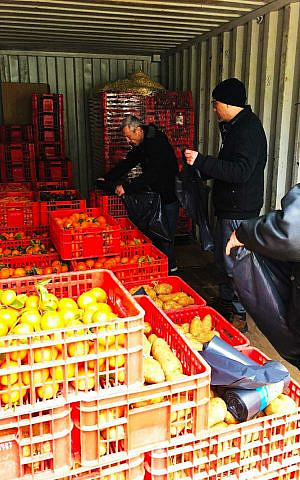 Pesia’s Kitchen works with the national food bank in Israel, Leket, and builds partnerships with companies, grocery stores and bakeries. On a shoestring budget and with minimal staff, Pesia’s Kitchen collects and distributes tons of baked goods, fresh produce and cooked food, providing meals to hundreds of thousands of people every year.

Today, about 1/3 of the food produced here in Israel and in other parts of the world is wasted. Of course, it’s a complex issue. And the logistics of getting surplus food to needy people is often overwhelming, discouraging greater efforts at food rescue. A mechanism has to be in place to transfer food that no longer holds commercial value – yet still has nutritional value – to those who need it. Gideon and the crew at Pesia’s Kitchen have developed a model for doing this, keeping costs down and delivering food daily to preschool programs for children of refugees, homeless shelters, elderly homes, battered women shelters, and halfway houses. 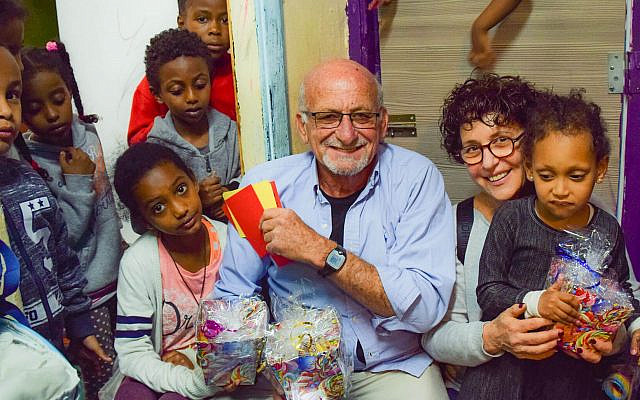 With a focus on South Tel Aviv, Gideon seems to have a 360° vision of the neighborhood and those in need. He also has a 360° vision of empathy, with a personal connection to so many who are often overlooked by others. I was lucky enough to meet Gideon through Julie Fisher, who also spends a great deal of her time in South Tel Aviv and shares his finely attuned radar for compassion. Julie and Gideon met years ago by dint of their mutual efforts to help thousands of asylum seekers and refugees living in that area. They continue to be in regular contact tracking the needs of the community whose members are particularly vulnerable during this crisis. Pesia’s Kitchen is one of the many organizations that is part of the Consortium for Israel and the Asylum Seekers, founded by Julie a few years ago. 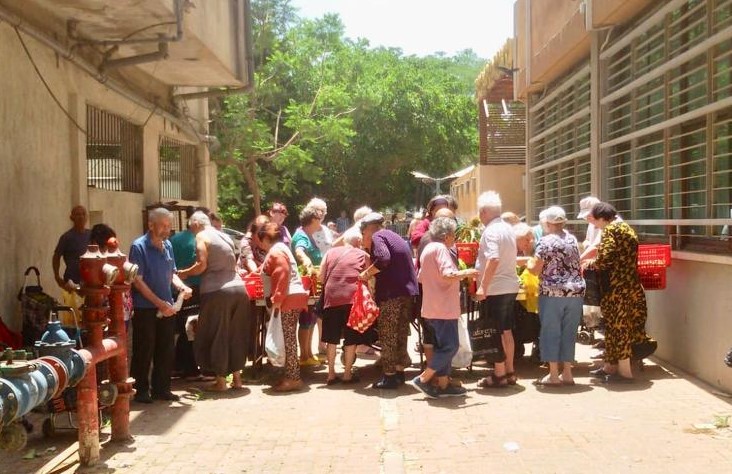 Prior to the shutdown, nearby elderly residents -including many Holocaust survivors- would come to select surplus food donated by partners. Spring, 2019. Courtesy of Pesia’s Kitchen.

Pesia’s Kitchen’s headquarters, located right next to a safe house and homeless shelter, is made up of a few donated shipping containers from the Israeli international cargo shipping company, Zim. When I visited Gideon with Julie back in February, he had just begun to transform one of the shipping containers into a small kitchen that would be equipped to make hundreds of bowls of soup a day.

So when the pandemic struck and many companies shut down their kitchens – cutting off the supply of prepared foods that Pesia’s Kitchen had been distributing, volunteer chefs with the help of new commercial grade equipment began making up the loss by preparing food themselves. And in the midst of this storm was Gideon, as busy as ever, running his nonprofit while also making sure to stay safe. 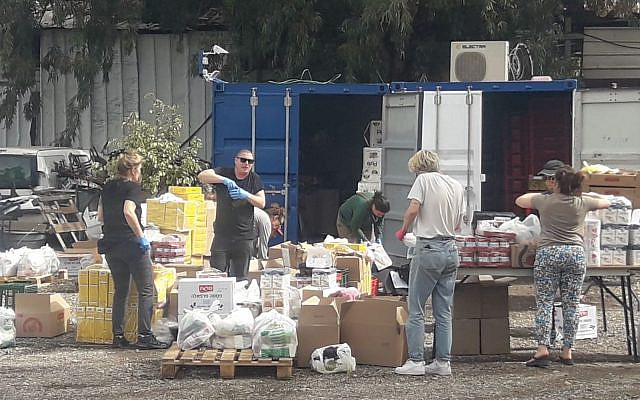 The needs at the present time are overwhelming and only going to get worse, but Gideon and everyone at Pesia’s Kitchen are staying focused on what can be done. That is what you do when you are teaching your children and your grandchildren what it means to have a more expanded life – that an antidote to listlessness or helplessness is not only chicken soup, but the joy that comes from helping others.

In such fragile times, the story of Pesia’s Kitchen is another reminder of how much we can honor those who have come before us. Who among us hasn’t heard stories about the role of food in building new homes in far-away lands? Of cooking as an act of defiance against hardship? Or of taking care of neighbors who may be suffering? And there were always the reminders coming from our grandparents’ Depression-era and war-time memories that we never should waste a meal. These messages resonate today more than ever. Our parents and grandparents have had much to teach us about how to respond to adversity. It was, and still is, part of their story. It’s part of ours too.

If you are able to get out at some point and find yourself in search of beauty, you can find it in an alcove in South Tel Aviv where a cluster of Zim shipping containers are located. The space is full of soup and love, moored far away from any ships in sea, seemingly out of place, but somehow at home. 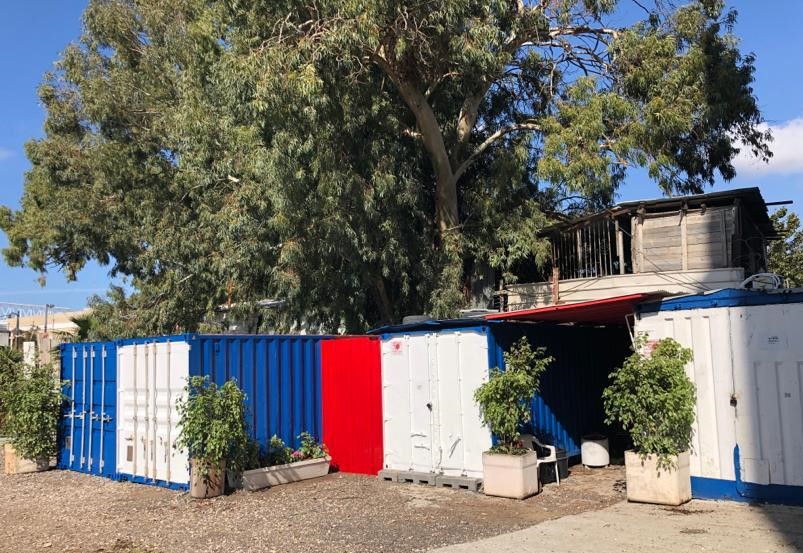 Persia’s Kitchen, which now includes a fully operating kitchen at the headquarters, is a part of the neighborhood scenery- working closely with local institutions and the Tel Aviv Municipality. March, 2020. Courtesy of Pesia’s Kitchen.
About the Author
Dr. Nancy Strichman teaches graduate courses in evaluation and strategic thinking at the Hebrew University’s Glocal program, a masters degree in International Development. Her research has focused on civil society, specifically on shared society NGOs and gender equality in Israel. She lives in Tivon, Israel with her four children and her very patient husband.
Related Topics
Related Posts
Comments