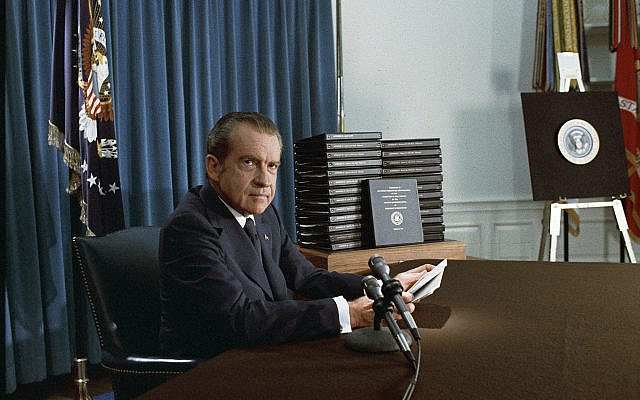 Then-president Nixon, with edited transcripts of Nixon White House Tape conversations during broadcast of his address to the Nation, April 29, 1974. (WHPO C1269-20, via Wikipedia)

Fifty years ago, on June 17, 1972, the Watergate break-in changed the world. Little did we know it at the time, or for months after, that this seemingly innocuous, two-bit trespass would transform how Americans would view the venerated institutions of our civic life. Many were tainted by the stench of the scandal, from the FBI to the CIA to the presidency itself. Other institutions, most notably the press, acquitted themselves quite well.

But what about the Jews — or as Nixon liked to call us, the Jewboys? Was Nixon the most antisemitic president ever? An argument can be made for that, but having had so many private conversations recorded probably gives him an unfair advantage. It’s hard to quantify such things, but it’s also hard to imagine American Jewry surviving someone who hated Jews more than Nixon did. Even before Watergate, there was Nixon’s “Jew Count.” discussed by Woodward and Bernstein in The Final Days. Nixon was convinced that Jews in the Labor Department were deliberately undermining his efforts by altering labor numbers, so he had some people with Jewish last names demoted. The plan has been called “the last known act of official anti-Semitism conducted by the United States government.” And wait, there’s more. President Nixon also pushed for tax audits of wealthy Jewish contributors to his Democratic rivals.

During Watergate, perhaps Nixon’s most vociferous defender was not only Jewish but a rabbi, Baruch Korff, whom Nixon introduced as “my rabbi.” Nixon’s speechwriter, William Safire, was also Jewish (Safire generously compared Nixon to a “layer cake”). They were not Nixon’s sole Jewish defenders — we can’t forget that many Jews considered Nixon heroic for airlifting assistance to Israel during those first precarious days of the Yom Kippur War. And there was Henry Kissinger, whose Jewish background was the source of some unease in an Oval Office suspicious of Jews. In one tape, Nixon blurts out to H.R. Haldeman, “The Jews are all over this government.” Nixon said the Jews needed to be brought under control by putting someone “in charge who is not Jewish” in key agencies. Washington “is full of Jews,” the president stated. “Most Jews are disloyal.” But he made exceptions, and for the most part, Kissinger was one of them. He even prayed with him as the walls closed in.

It’s clear that Nixon’s antisemitic proclivities went way beyond “Jewboy,” tax audits and labor statistics. He considered Jews to be “born spies.” Nixon conjured up Jewish demons even where there were none; his paranoia extended to non-Jews who seemed Jewish to him. His original enemies list and expanded master list of political opponents had plenty of Jewish sounding names. In the tapes, his response to the Pentagon Papers leak was to consider reviving the House Committee on Un-American Activities to investigate government whistleblowers — or in his words, “going after all these Jews. Just find one that is a Jew, will you.” But Daniel Ellsberg was not Jewish — he was raised as a Christian Scientist, though his parents were born Ashkenazi Jews.

Mark Felt, the great Watergate whistleblower of “Deep Throat” fame, was also not Jewish; nonetheless the Watergate tapes disclosed that Nixon was suspicious of him as he asked H.R. Haldeman, “Is he a Catholic?” Haldeman replied that Felt, who was of Irish descent, was Jewish, and Nixon replied: “It could be the Jewish thing. I don’t know. It’s always a possibility.”

What exactly is this “Jewish thing?” What is it that caused Nixon to assume that whistleblowers like Deep Throat and Ellsberg were Jewish?

Nixon would undoubtedly have invoked the Protocols of the Elders of Zion and spoken of dual loyalty, but I’d define the “Jewish Thing” as the prophetic instinct to speak truth to power, to seek justice and pursue it, following the calls of elders who speak on the pages of Isaiah 1:17, Deuteronomy 16:20, Micah 6:8 and Psalms 34:15 — and so many more ancient passages. We are obsessed with justice. The word for justice, tzedek, appears no fewer than 118 times in the Hebrew Bible. Click here to see over 4,000 usages of the term “justice” in the Sefaria database of traditional Jewish sources.

We won’t accept a world where bad presidents happen to good people. We are obsessed with getting it right. We are maniacal for justice — and we’re seeing it again this week with the January 6 investigation.

Any nation can have kings and emperors. We have them too, but we also have prophets. Yes, we have our share of corrupt politicians, including two Israeli former prime ministers who are currently suing each other for slander in one of the most absurd trials of all time. We’ve had Olmert, who went to jail, and Bibi, who might, and King Ahab, who robbed a poor man of his livelihood and his life. We had a whole slew of corrupt Hasmonean rulers. But we also had Jeremiah. We had Nathan. We had Spinoza and Kafka and Reb Nachman. We are the people of Mike Wallace and Philip Roth and Arthur Miller and Boris Pasternak. We are the people of Carl Bernstein, along with a slew of great journalists and other truth tellers, and at least in H.R. Haldeman’s estimation, we are the people of “Deep Throat” too.

Yes, it’s nice to know that, to Richard Nixon, Jews were a “thing.” We are a “thing” that stands up to corruption. We are a “thing” that believes in an old fashioned concept called integrity and honesty. We have a sense of shame. We speak truth to power. Even when there are political differences, how could a Jew not admire someone who stands up to power even at the risk of their political future. That happened so often in Watergate — it has rarely happened after January 6. Our “thing” is why he feared us — and why extremists, liars and cheats continue to today.

Fifty years later, Nixon and Deep Throat and many of the other key players are gone. Nixon never went to jail, but neither did he get away with it. Meanwhile, the Jewish Thing lives on and on.

May it — and we — continue to spread the light of justice throughout the world.