Sometime on Thursday night, terrorists in the Gaza Strip launched three rockets into Israel in hopes of killing Israeli civilians who live in Sderot. These would-be murderers almost achieved their goal even though two of the rockets were stopped by Israel’s Iron Dome defense system and a third landed in an empty field.

They almost achieved their goal of killing civilians when an Israeli woman picked up her three-week old baby and ran toward a safe room in her house. As she made her way down the stairs, she tripped.

The poor woman tripped while carrying a three-week old baby and as a result, the infant suffered a head injury. A few inches in either direction, a little bit more force to the fall, the child would have died, on the spot.

Fortunately, Israel is a modern country. Israeli doctors — Jewish, Christian and Muslim — will work to provide the care the mother and child need to live healthy and productive lives.

That child, born in Sderot, can flourish and be a blessing to the world. Given what we know about Israel and Israelis, mother and child will, over the long run, choose blessing over trauma and future hope over past resentment.

If the terrorists were, by some miracle of modern technology — or moral imagination — able to watch the scene unfold, they would have a choice to make. Would they cheer that their efforts to terrorize Israeli civilians came to such horrifying fruition?

Or would the remnants of their better selves, which have been so badly undermined by years of indoctrination, rebel — even weakly — at the horror they have inflicted on a young mother and her innocent child? Would they transcend the circumstances of their upbringing and question what they were doing?

The sad fact is that if any of the terrorists on that rocket team did suffer from a pang of conscience at the harm they inflicted on a young mother and her baby, he could say, “Well, at least we have the World Council of Churches on our side.”

And he’d be right.

The plan for Arab and Jew to live in peace is based on an exchange: the Israelis get security and in return the Palestinians get self-governance and prosperity. Between the Palestinian refusal to negotiate and the real demands of reform it makes, the Trump plan has been born into difficult circumstances. 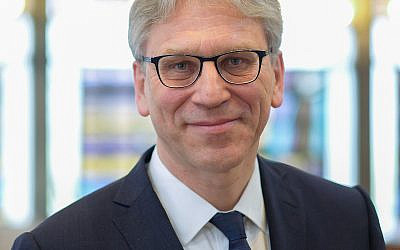 Soon after the 181-page proposal was released, Olav Fykse Tveit, the WCC’s Secretary General, issued a statement that urged “members of the international community not to support this proposal or to recognize its implementation unless and until a better plan has been negotiated and agreed with the representatives of the Palestinian people and in compliance with the principles of international occupation and human rights.”

Instead of calling for the Palestinians to come to the table and negotiate in good faith, something they have refused to do for years, Tveit rewards Abbas’ intransigence by tripping up a peace process that has already been endorsed by numerous Arab countries in the region.

With his statement, Tveit gave Abbas the cover he needs to not come to the table. Tveit even affirmed the grievances Palestinians have used to justify their intransigence over the years proving yet again that forgiveness is a Christian value except when Jews are involved.

The WCC leader who based his career as an “ecumenical leader” on pontificating about the conflict, thinks he knows better than folks who live in the region who want it to end and have told Abbas to start negotiating, to at least look at the plan.

It’s a terrible thing to behold.

Tveit and the organization he leads haven’t been all that vocal in condemning Palestinian terrorism, or the incitement against Jews by Hamas and the Palestinian Authority.

Under Tveit’s leadership, the WCC said very little about the stabbing intifada in 2015 that terrorized Jews living in Israel.

The WCC has been pretty quiet about the balloon bombs that terrorists have been launching into Israel from the Gaza Strip in recent months.

The WCC has said virtually nothing about the corruption and authoritarian rule by Hamas in the Gaza Strip and the Palestinian Authority in the West Bank.

Over the years, the WCC has  itself to be a friend to Palestinian acts of violence and an adversary to Jewish self-defense.

With its recent statement, the WCC has revealed itself to be an obstacle to peace itself. Trump’s peace plan, like the infant Jesus, was born in some pretty difficult circumstances. And instead of working to protect it, breath life into it, Tveit works to abort the process, to trip it up.

During the Christmas season, Rev. Dr. Naim Ateek, founder of the anti-Israel organization, Sabeel, invoked the image of Herod, who in the Gospel of Matthew tries to enlist the three wise men in a plot to kill the infant Jesus.

He wrote, “Herod’s reaction to the coming of a new world order cautions us to stop and ask, how do we react when the order of things is threatened?”

The three wise men knew enough not to assist in the effort to murder an infant in its crib.