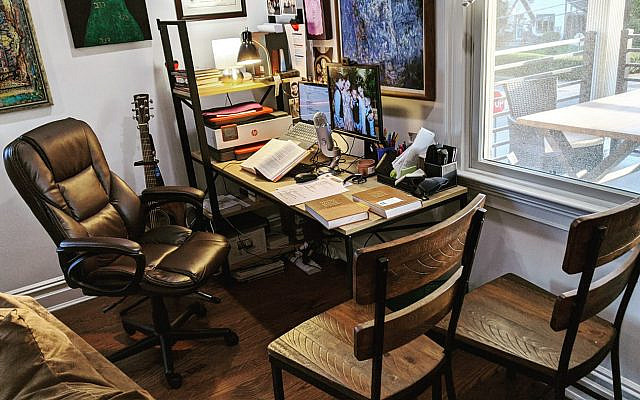 Rabbi Menachem Creditor's makeshift studio. (Facebook)
The more digital teaching and davening I do with communities around the world, the more convinced I am that it is real. It’s not that any of us would have chosen this path. I know we would give up every last one of these platforms if it meant saving just one of the over one million souls we’ve lost to the pandemic to date. And it’s also the case the vast majority of the Jewish High Holidays were a transformation of the notion of community, a pivot point in our history.
So many communities that would not have used technology on Shabbat or holidays have invested energy and money in utilizing them to share sacred experiences. Communities that were already utilizing these methods have sharpened and widened their media skills. Many older adults, often late-adopters of technology, were brave and found their ways into Zoom Schmoozes (even if the camera angles could have used some adjusting!), and some families that would not have (could not have) snuggled in shul pews found themselves resting on each other in comfort while soul-stirring melodies and teaching poured out before them.
Friends, I’m not saying we should stop yearning for the physical intimacy of our sanctuaries. Far from it. I ache – deeply – for the sacred space we call “shul.” But I am suggesting that we not stop experimenting with new media and that we allow – nay, embrace – this organic, explosive redefinition of community.
During Rosh haShannah and Yom Kippur, my holy wife Neshama Carlebach was lifting countless souls in Rabbi Jeff Salkin‘s community in Florida (and beyond) from her makeshift studio in one room of our home. I was mere feet away from her, in an adjoining room, helping lead davening with the amazing Congregation Beth El community in New Jersey with dear friends Rabbi Jesse Olitzky and Rabbi Rachel Marder. Our home has been pervaded during these days by the nervous/ecstatic energy of the chagim that I had previously only associated with physical-shul davening. Now I understand a little better: this WAS shul davening. We, all of us – rabbis, cantors, volunteers, educators, executive directors, production teams, congregants – effectively translated the rituals, and sounds, and visions of our People through the digital platforms into each other’s hearts. We did it.
Was it perfect? Decidedly not. Did we ask for it? Certainly not. Did we learn at breakneck speed for the sake of our ancestors, who themselves brought the treasures of Jewish heritage to every new shore they reached? Absolutely. They would be proud. Shocked, baffled, dizzy – and proud. As should we, their pioneering descendants, be.
As my father, my teacher, has said from time to time, “We have acquitted ourselves nobly.”
About the Author
Rabbi Menachem Creditor serves as the Pearl and Ira Meyer Scholar in Residence at UJA-Federation New York and was the founder of Rabbis Against Gun Violence. A frequent speaker in communities and campuses around the United States and Israel with over 1 million views of his online videos and essays, he was named by Newsweek as one of the fifty most influential rabbis in America. His 21 books and 6 albums of original music include the global Jewish anthem "Olam Chesed Yibaneh" and the Rabbis Against Gun Violence anthology "None Shall Make Them Afraid." He has been involved in the leadership of American Jewish World Service, AIPAC, the Rabbinical Assembly, and the One America Movement, an organization dedicated to bringing together Americans of different faiths and opinions. He and his wife Neshama Carlebach live in New York, where they are raising their five children.
Related Topics
Related Posts
Comments