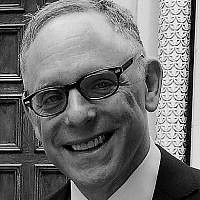 The Blogs
Edwin Goldberg
Apply for a Blog
Advertisement
Please note that the posts on The Blogs are contributed by third parties. The opinions, facts and any media content in them are presented solely by the authors, and neither The Times of Israel nor its partners assume any responsibility for them. Please contact us in case of abuse. In case of abuse,
Report this post.

The day after 9/11/01, there was a headline stating that, after this tragic terror attack, Americans finally understood what Israelis were experiencing every day during the Second Intifada. Soon there would be guards at every coffee shop, just like in Israel. And life as we knew it in America would stop. Fortunately, the guards never showed up in front of Starbucks, and, last time I checked, there were none in sight at my favorite Jerusalem café. Nevertheless, recently I came to understand that in a very different way, a certain political side in America should be able to understand Israel’s current dilemma.

After the Sarah Sanders, the press secretary to President Trump, was asked to leave a restaurant in Virginia, many liberals applauded the action of the owner of the Red Hen. In response some conservatives – and other liberals – castigated them for promoting uncivil behavior. Apparently, the right wing in America has refined the fine art of hypocrisy: complaining about behavior on the other side while blithely ignoring or endorsing it on your own. Writing of this backlash, Michelle Goldberg (no relation) in the New York Times, observed that “…there’s an abusive sort of victim-blaming in demanding that progressives single-handedly uphold civility, lest the right become even more uncivil in response.” [Michelle Goldberg 6 25 NYT]

And this brings us to Israel. For more years than many supporters of Israel would like to remember, the liberal voices in the United States have bitterly condemned Israel for doing things like defending its borders that they would never expect other nations or terrorist groups to eschew. This double standard is frustrating at best and diabolical at worst, and it is pervasive. Israel is supposed to act with morality always and the other players are under no expectation. How ironic that when supporters of Donald Trump challenge liberals to a higher moral standard, fully aware of the baseness of their leaders, liberals are frustrated. As a fellow liberal who also supports Israel’s security, I want to shout: “Do you finally get it? No matter what one does there will be a higher standard. Don’t descend to their level but don’t expect that the other side will behave in a dignified, moralistic way.”

My fantasy is that the liberals who hold Israel to a higher standard will have a little more humility when judging Israel. After all, if there is a silver lining to the political era of today it is that immoral behavior is often deflected by appeals to righteousness while at the same time the behavior itself is tacitly encouraged. As Dr Johnson once observed, “Patriotism is the last refuge of a scoundrel.” The scoundrels are in ascendance, and the liberals are in a quandary: stay out of the mud, get in the mud, or find a third way.

For the sake of civility, security and fairness, I hope that third way is found, and soon.

About the Author
Edwin Goldberg is the senior rabbi of Temple Sholom of Chicago. He served as the coordinating editor of the new Reform Jewish machzor, Mishkan HaNefesh, and has published many books in the field of Jewish texts and their application to the modern world. His most recent book is Divrei Mishkan HaNefesh, a commentary on the new machzor. He holds a doctorate in Hebrew Letters from Hebrew Union College-Jewish Institute of Religion.
Comments