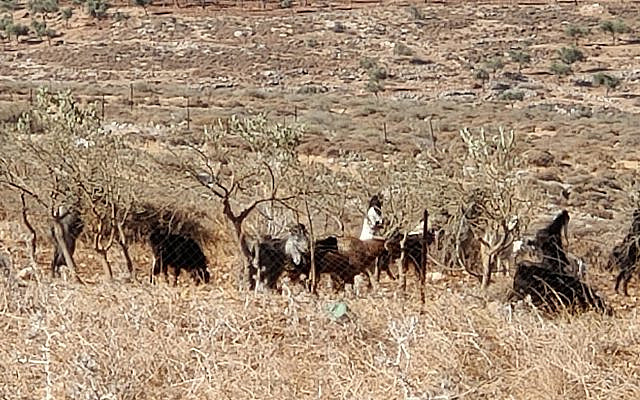 Shavua Tov. This is the quick dvar Torah, with a few takeaways from last week’s Torah portion, Ki Titzeh. I wrote it quickly, having  just returned from the police station. There wasn’t time to get it approved before Shabbat.  We were accompanying the Palestinian farmers of Dir Jarir, after catching the flocks from the illegal even according to Israel outpost of Ma’aleh Ahuviah in Dir Jarir’s olive groves, fields and vineyards.  One of the settlers also came towards us, masked and threatening, until I stepped out of the car and made it clear that he had to stop.

.  Ibn Ezra says that you gave what you thought was yours. Rabbi Shimon Rafael Hirsch goes further, and teaches that we are terribly mistaken if we think that the corners of our fields and the fallen shelves we leave for others, were ever actually oursFor the same reason we learn in Pirkei Avot that the person who says “What’s mine is mine and what’s yours is yours” can be seen as an average person, or as an evil person.  It can be an excuse to let somebody starve to death on our doorstep.

If we are commanded to allow the weakest members of our society, both Jewish and non-Jewish, to share what we mistakenly think is “ours,” how much more so must we understand that we cannot use force to take what is theirs. Yet, Zeev Hefer proudly declared at the Amana conference on February 20th of this year, that they had set up some thirty (illegal even according to Israel) shepherding outposts because each one can take over some 1000 dunam of land from Palestinian’s. He announced that there would be more.

We are also taught “When you make a loan of any sort to your neighbor, you must not enter his/her house to seize is/her ledge. You must remain outside, while the person to whom you made the loan brings the pledge out to you. (24: 10-11) “One’s home is one’s castle.” The place where a family is safe and secure. So, as I wrote about at length last week, how can it be that the current Israeli government has renewed the policy of evicting the weakest and poorest from public housing apartments?

One final thought. While in several places in the Torah Ibn Ezra sees the command not to pervert justice or oppress the non-Jew, orphan and widow as primarily directed towards the judge (although he also writes of collective responsibility), Rabbi Hirsch writes, that the command not to subvert rights cannot possibly be directed just towards the judge, or refer only to what happens in court.” It refers to our society as a whole, and is a command to each and every one of us.

On this Shabbat, in this month of Elul, and always, may we each feel commanded and warned, and do what must be done so that all human beings will enjoy the fruits of their fields, olive trees and vineyards, and every human being will have a home where they feel secure and safe.