Of all the accounts written about the horrific hostage taking at Congregation Beth Israel this past Shabbat and the miraculous escape of the hostages, the most poignant to me was Jacob Magid ‘s commentary in his Times of Israel article about one of the hostages Jeffrey Cohen and his call to his family:

“Cohen choked up several times throughout the 40-minute conversation, describing the phone calls he made to his wife and children that he thought would be his last…”

That one statement epitomized the anguish experienced by the hostages and their families as they became engulfed in the excruciating standoff and all its possible ramifications.

WE ARE ONE FAMILY

The hostage taking likewise galvanized world Jewry as expressions that We are One Family were articulated from Israel and around the globe, as well as heartfelt jubilation with the news of the incredible escape and reunion with the families. As a native Texan having made Aliyah to Israel, my gratitude to Hashem for the safe reunions is enormous.

Focus on Marriage and the Family

The focus on the family is actually a theme throughout entire Jewish month of Shevat, starting with another reunion of family members in this week’s Torah portion of Yitro. As I wrote in a prior blog, Do It For Your Children’s Sake, Moses is actually reunited with his wife and children.

This reunion is alluded to in the following passage:

The theme of a New Marriage and family was also the subject of my blog entitled Renewal and Mission of Hope. The blog references this week’s commemoration of Tu BiShevat and as a remembrance of the upcoming yahrzeit (29th Shevat) of Ilan Ramon z”l and his special relationship with his wife Rona Ramon z”l.

A Family Response to the Hostage Taking

Anytime a trauma occurs which impacts our nationhood such as this week, it signals a need for reflection as to what appropriate responses we may have. Much has been written about the enhanced safety considerations around the synagogues.

I want to suggest that equally important is what we can do to support and secure our homes, not only from a physical security standpoint, but also from an emotional standpoint. Our homes must become the fortified bastions for confronting trauma or any sort large and small and that does not happen without an investment of time and modeling.

I discovered a fascinating article entitled “Judaism’s Bill of Obligations in Marriage” which is a must read. The main premise of the 33 items mentioned that comprise the obligations is to be a mensch.

The themes of respect, teamwork, support and encouragement and safety are mentioned.

Two items which to me are essential include:

The time is now to make our marriages and families our priority and make the statement that we really can survive in times of crisis. One way is to support initiatives that are being taken to promote marriage education such as our amuta Together in Happiness has been articulating.

Our latest initiative geared to support engaged and newlywed couples is called Project Chayei Sarah and it has 6 paths for involvement as articulated in a prior blog:

If ever there was a time to unite around our values that define us as a nation it is now. We pray that there will be an end to any more traumatic events as this week, and that one outcome will be a unity that propels us to celebrate what it most dear to us – our families.

So please write to me and say:

And email me at marriageconf@gmail.com

The launch of Project Chayei Sarah is a dream that can be fulfilled as one positive outcome if we all band together to take it from the dream to the reality. 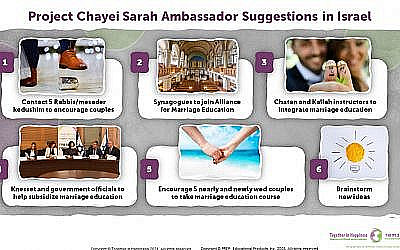 property of Susan Barth
About the Author
Susan Barth is founder and director of Israeli non profit Together in Happiness/B'Yachad B'Osher, promoting stronger, healthier marriages impacting Israeli society. A Project Management Professional (PMP) and businesswoman from the US, Susan sponsored and chaired the First International Conference on Marriage Education in Israel (attended by over 360 professionals) in Jerusalem in memory of her parents and launched I-PREP, an innovative marriage education curriculum. On November 8, 2017, Together in Happiness co-hosted with MK Yehudah Glick a historic Knesset seminar promoting government support for pre-marriage education
Comments