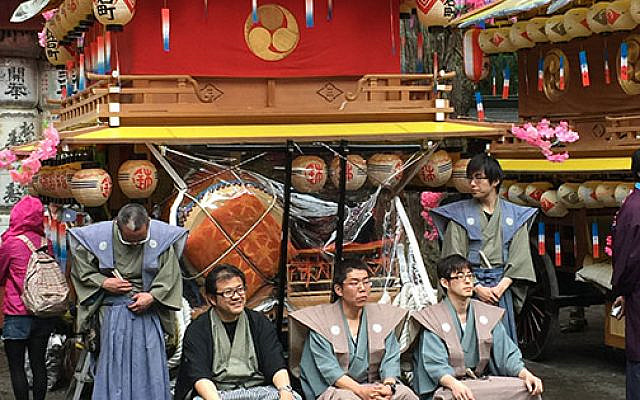 I wonder what the world will be after the post-COVID-19 pause. Will we learn anything about what it means to be part of an interrelated human community, or will we maintain our selfish individualism, thinking mainly of ourselves? The media has so many uplifting stories, illustrating the courage of not only caregivers but also the usually invisible workers – e.g., delivery people and grocery workers – who have been there as the heroes of the pandemic. Sadly, I have also read and heard an equal number of stories about selfishness, which ignore the needs of others (even the easy provision of food) for the maintenance of unnecessary pleasures and “so-called individual rights.”

The importance of community cooperation and interconnectedness is not new. Indeed, there are many strategies to highlight and create this sense of social obligation. Throughout history, pilgrimages and festivals, such as Passover and other Jewish holidays, have served just this purpose. Here in Japan, many of the matsuri (community festivals usually centered around a Shinto Shrine or Buddhist Temple) fulfill this critical role.

One matsuri (usually held at just this time of year in a small area surrounding Nikko), in particular, clearly aimed at creating a network of cooperation, interconnectedness and shared obligation. The Yayoi Sai Matsuri features processions throughout Nikko (a regional market town and religious centre), involving a large number of floats carried by young men from each of the neighborhoods and surrounding communities. Finally, at the climax of the festival, all the floats gather in the courtyard of the Futarasan-Jinja, one of Nikko’s major Shinto shrines.

After a short Shinto ritual, community representatives visit all the other floats to extend greetings and congratulations. The greetings are very formalized, as the visitors bow, yell and chant good-humoredly. The greetings are then respectfully received with the appropriate traditional responses.

Interestingly, such a festival could quickly have degenerated (as often happens with High Holiday clothing, Christmas, or Halloween decorations) into a competition as each local community attempts to outdo the others with elaborately decorated floats. Instead, each of the floats is identical. This similarity removes the potential for bad feelings or the embarrassment of smaller or more impoverished communities. I do not doubt that the festival originated with just this aim: to create a bond and good feelings for all the people from all the different communities and neighborhoods in the district.

I do not doubt that the great pilgrimages to Jerusalem in antiquity (and the Haj or contemporaneous pilgrimages to other religious shrines) served a similar purpose. They remind adherents of their interconnectedness and shared commitments. Like expressions in Shinto, Judaism is not a religion of isolation, but instead of community. It is nearly impossible to be a Jew, living alone in the world. Like in Nikko, community and connection — with care for the disadvantaged and even the stranger — is at the core of all we do. Perhaps in the days to come, we will need to develop some global rituals which will likewise remind us of our interconnection and obligation to all humanity.