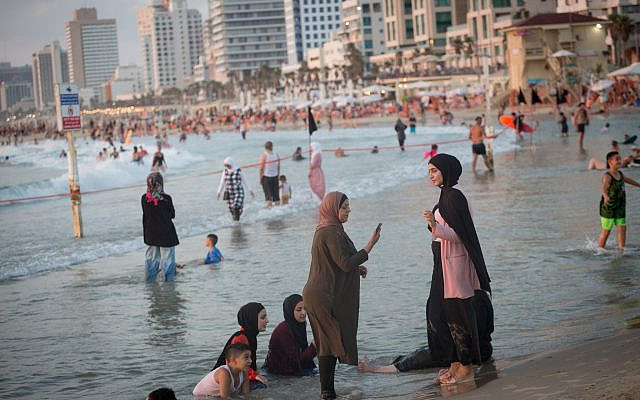 “Why are you so afraid? You saw your friends, you read the news. All of Palestine is coming without permits to Israel.”

I was trying to convince my Palestinian partner from our peace organization that it was time to stop waiting for permits and bring all of our Palestinian participants on a trip to Israel without those annoying, hard-to-get permits, that the army has not been granting since March, anyway. We call the DCO every week and we get the same reply: “No permits until further notice.”

Apparently, there will be no permits until the corona situation ends. Really? I thought we were meant to live with it, learn how to wear the masks, behave like Northern Europeans in public and nobody will spread the disease.

During the last couple of weeks, many Palestinians entered Israel without permits through a hole in the fence. The hole became so big, they even asphalted the roads nearby for buses to stop and wait for passengers.

There is no need to wake up at three am to get to the hole, putting on your fake blundstones and that stupid temble hat to look like the locals, less suspicious, until you get to the beaches of Tel Aviv, Yaffo, Haifa, and enjoy the freedom.

But he doesn’t agree! He keeps telling me: I do not want to take any chances.

“How about we keep it safe just like that time when I went to bring Ayman from that junction. I met him at the gas station and first thing, I sent him to wash off all of that hair gel in his hair.”

However, Palestinian guys’ haircuts nowadays are harder to camouflage. Can you imagine Johnny Bravo with a baseball hat? The role of the hairdressers in this conflict is underestimated. The fate of their clients, who may get interrogated on the streets of Jerusalem, is in their hands and scissors.

“Listen, we tell them: no blue jeans, no perfume, and no white shoes. The general look has to be unkempt and weary. Israelis never iron their shirts.”

“Please Ruth, I don’t have the energy to argue with you. When they get caught, you have nothing to lose. You are Israeli, they will let you go home. But they will have to pay the price. If it’s their first time, they will be blacklisted and not granted permits perhaps for a year or more. If it’s their second time getting caught, they will go directly to jail. It is too dangerous!”

“But nobody is getting permits anyways! Now it’s the perfect opportunity! In the worst case, if we do get checked, we can always say they are olim hadashim (new immigrants) who are still getting lost here and constantly forget their IDs in the ulpan dormitory. Like that time when they stopped us with Rana near the checkpoint. When they asked for our IDs, I told them she forgot hers and that she is my cousin from Bulgaria who just made aliya, which did look suspicious since she is black. I was just too nervous to think. But I believe it helped take the attention away. I saw so much confusion in the soldiers’ eyes, which left no space for suspicion of her being an illegal resident from Gaza – illegal even in the West Bank.”

“Of course, she is black. Israelis are not aware of the existence of Afro-Palestinians, nor of Palestinian girls without hijab.”

“My last offer. Take it or leave it! First of all, we involve our Israeli team in helping with the smuggling. Kfir said he is going to bring some old T-shirts from the army to give people to wear. Naama’s idea is to paint guys nails with black nail polish just like some guys do in Tel Aviv today. Gosh, good luck to her.”

“Yeah, Palestinian guys would rather go to jail than get a manicure!”

“Wait. Listen. I will collect shoe sizes and we buy everyone sandalei shoresh. They should wear them with socks. OK, let’s not exaggerate though. Kfir’s idea was that everyone should bring yoga mats so it looks like we all are a group going to a yoga retreat. If you ask me though, the best cover here is that Israelis are claiming that those weirdos with them are their friends.”

We both burst into laughter, imaging the scene and our group, commenting on each of our friend’s reactions and I was excited for the adventure to come and proud of myself, I succeeded in convincing him!

“It would work for sure but we are not going to do it nevertheless!”

“What? Why? I don’t understand,” I seriously couldn’t.

“You want to know why? Let me tell you. When I was 16, my father was diagnosed with cancer. He would go for chemotherapy treatments in the Augusta Victoria hospital in East Jerusalem. One day he wasn’t given a permit, the DCO closed earlier or something, I don’t remember. My father called the hospital and they told him to come even without the permit because it was very important to get his final chemo. Guess what happened? They stopped him after he got smuggled and asked for his permit. When he told them, they could call the hospital to check that he had an appointment, they just beat him up instead and sent him back home. I remember sitting on the edge of his bed, he could hardly open his swollen eyes, when he told me to promise him never to go without a permit, and not to let my siblings do it. He told me, never to take any chances. I missed a lot of opportunities joining my friends through the hole. So I just can’t. I’m sorry. We have to wait for the permits.”

I couldn’t keep on arguing. We are waiting for permits.